In the summer of 1971 I felt the tidal pull of my generation (Michael Brownstein: “We’re not supposed to be in the East; we’re supposed to be in the West”) and set out to thumb my way from New York City to San Francisco. I was a year out of college, a year back home, clerking at the East Side Bookstore on St. Mark’s Place.

A job and possible career in publishing had beckoned, with an interview to be the personal assistant to Michael Korda, then editor-in-chief at Simon & Schuster, thanks to an introduction by a family friend. Korda let me know I’d likely spend six months editing manuscripts such as The Settlers, a hefty saga by Meyer Levin about pre-WWI Zionist pioneers in Palestine, and handed me the five-inch-thick typescript to take home. Every page swarmed already with penciled author edits. I can’t recall how far into it I waded, but I returned it to Korda the following week, saying I’d decided to hitchhike to California instead. He took another look at my shoulder-length hair and handed me a copy of the recently published third Don Juan book by Carlos Castaneda to take along.

I’m pretty sure we were sober. Maybe that was the trouble.

But I was traveling light. Although I owned a backpack and other camping gear (the East Side Bookstore had a sister shop called the Survival Store), the poet Harris Schiff advised me against any encumbrance that couldn’t be easily dropped when you needed to run. He didn’t mean run to catch the ride that had just pulled over for you. So I slung my sleeping bag, poncho and Rand McNally Road Atlas under an army surplus shoulder bag that must have contained a light sweater, a toothbrush, a journal…I can’t say what else, Cheez Whiz? Don Juan stayed in the East.

Harris also gave me a floppy straw hat. So, in the hot August sunshine, I took up my stance near the entrance to the Holland Tunnel and waited. My recollection is that I waited a long time, but eventually someone picked me up and dropped me near the row of gas stations on the Jersey side. A lot more waiting.

The two young gallants hitched off on their own, leaving the girl stranded and broke by the side of the road. I gave her some cash ($10 meant something in those days) and kept going too.

Of the thirteen rides it took me to reach the West Coast, I can clearly recall only three. The worst was early on, somewhere in New Jersey or Pennsylvania. Three teenagers from Yonkers, two boys and a girl. Think of the Joaquin Phoenix and Casey Affleck characters in To Die For. It was the girl’s car. Maybe a Mustang. They’d set out with no destination I could discern, other than west. Relationships were unclear, the atmosphere mildly menacing. The aftermarket gas pedal was metal, in the shape of a bare foot, I saw when I took my stint at the wheel. We drove and dozed through the night. Somewhere in western Pennsylvania the next day, the engine seized up. The guys had neglected to add oil. The two young gallants hitched off on their own, leaving the girl stranded and broke by the side of the road. I gave her some cash ($10 meant something in those days) and kept going too.

My plan was to rendezvous in Iowa City with Merrill Gilfillan (who had recently retired from the Survival Store), spend a week there and push on together. Merrill had given me the address of Darrell Gray, his Writers’ Workshop friend, who was willing to put us up, but the day I arrived all the poets were out of town at a poetry conference in Michigan. I managed to break into Darrell’s apartment through a flimsy back door and sacked out on the living room couch. Hours later I woke in the dark to “Aha! A person,” uttered with much sangfroid by George Mattingly—apparently the one Iowa City poet somehow not in Michigan—who had come to feed the cat.

The dog and cat names are the first journal entry I see. Then this: “What is better as I get west/is dope & record collections.”

Merrill eventually showed up, as did Darrell, Allan Kornblum and the other conferees. The week that followed is a blur of Midwestern summer heat, barroom afternoons, collating parties for Allan’s Toothpaste Press, the quarry swimming hole, beers at the Old Mill, late-night feeding at the Skelly truck stop on the interstate—getting to meet the local heroes like artist Dave Morice, Allan’s girlfriend Cinda Wormley, Chuck Miller, John Sjoberg—the ghost of recent visiting “lecturer” Ted Berrigan still very much present. Somebody said Louise Glück was in town, staying with an aunt. They could take us to meet her. Merrill and I sat awkwardly in the aunt’s living room through some stilted conversation. I’m pretty sure we were sober. Maybe that was the trouble.

We headed west. The next stop was Colorado, where friends of Merrill had a rustic cabin up Boulder Canyon towards Nederland. But first, Denver, where we met their friend Tammy with her ’40s Ford pickup that wouldn’t start without a running push down the road. It got us to the cabin. There the food was macrobiotic. Brown rice and vegetables with occasional chapatis for a treat. No electricity. A slew of mountain dogs and cats: Rosy, Mingus, Sebastian, Bobo, Calico, Tee and Eff. There was also a sweat lodge of old tarps on a frame, hot rocks, rosemary switches and a run naked down the hill, across the road, into the freezing creek, startling more than one passing driver. It was 1971 and they were probably not all that startled. At one point Merrill and I snuck off to Nederland for a hot dog. It tasted awful. Someone took apart Tammy’s carburetor to clean it and was completely flummoxed by the task of reassembling the dozens of small metal parts.

The dog and cat names are the first journal entry I see. Then this: “What is better as I get west/is dope & record collections.” 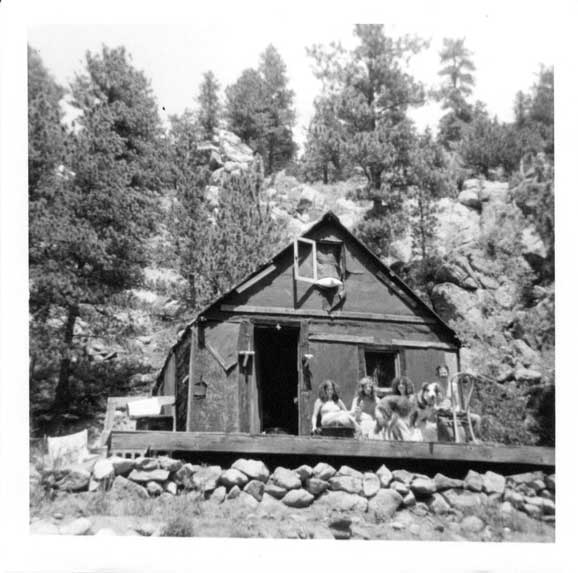 After a week we were on the road again. Somewhere in the high country we got a ride with two guys in an Econoline van and rocked and rolled on its floor all the way to the eastern entrance of Yosemite National Park early one morning. We hitched our way down to the valley, which turned out to be the toughest stop on the trip. A whole day of thumbing got us nowhere with the parade of families going home, and we crashed in the woods that night.

We finally made it out of the park. When we neared the Bay Area, Merrill recalls, a car stopped for us, and as we lumbered toward it they took off laughing in a cloud of gravel. The second-to-last ride dropped us in Berkeley. There, at the University Ave. entrance to I-80, we were picked up by a chatty young woman in a BMW, with long hair and the unlikely name of Circe Shapiro. She was vaguely connected to the San Francisco rock music and drug scene. She seemed to enjoy talking to us. Somehow, and this makes no geographic sense, we ended up in Pacific Heights, tumbling down the steep blocks at high speed, shouting “Bullitt!” I was riding shotgun. At one intersection I noticed another vehicle approaching on my side, with just enough time to say “Uh-oh” before it hit us.

Alan Bernheimer’s latest collection of poetry is The Spoonlight Institute. His next, From Nature, is forthcoming in 2019. Born and raised in Manhattan, he has lived in the Bay Area since the 1970s. He produces a portrait gallery of poets reading on flickr. His translation of Philippe Soupault’s memoir, Lost Profiles: Memoirs of Cubism, Dada, and Surrealism, was published by City Lights in 2016.