This is the tricky part.

A guy enters a bar, orders a drink. I serve it to him, and then I wait. I watch. I look for anything that suggests this is his last night on Earth.

After three years working here, you’d think I’d be better at it. But I’m not. The signs are always different. It’s convenient to think that they’ll cry or sigh or stare out at the sea, rattle the ice in their glass and scribble a few lines of goodbye prose on their cocktail napkin. But that’s not the case. Sometimes they’re happy. Glad. Relaxed and alive, as if they were any another vacationer visiting a bar they read about online.

Only two weeks ago, one bought a round of shots for everyone. Then he stood up from his stool, kissed a woman on the forehead and strolled over the edge of the cliffs, neat as could be.

The obvious question is why don’t we put up some sort of barrier. The answer is the terns. They’re endangered and nest here, so new construction is forbidden. Jeff has gone around and around with the state about that, always with the same result. Poor guy. I mean, this wasn’t part of his plan when he bought the property, that patrons would fling themselves off the cliffs. He was just another corporate burnout looking to escape, trying to spend less time with his cardiologist and more time with his family. He thought it was his lucky day; the bar and hotel had been closed for decades and both were in need of renovation. The property had what real estate agents always like to call “good bones.” In other words, it was a dump, but one with earning potential.

And there was that view.

Jeff told me once that the view made him feel ancient.

Jeff told me once that the view made him feel ancient, in a good way. Not old, but wise, like he could look out where the sky meets the water and know that it had been this way for millions of years, with everything settled and fixed. It should make him feel small, he said, but it didn’t.

I sort of knew what he meant. The cliffs don’t make me feel small either. Instead, they make me aware of just how much space I take up. The bar is set way back from the edge, a good two hundred feet, and yet I always spend the first hour of work nursing a ginger ale and convincing my stomach it doesn’t need to haul ass out of here.

Still, a job is a job. And a customer is a customer.

This one has never been in here before. I’d remember. Mid-fifties, with thick blonde hair held back with a rubber band. A deep tan, some ink on his forearms. Grubby. I wonder if he’s sleeping somewhere nearby, in his car or even outside beneath the trees, spending his last wad of money and time here with us.

It’s a Sunday night and slow. Katie nods at me to ask, “Yours or mine?”

He looks down and away, anywhere but at me. This, combined with everything else, probably counts as a sign. “Whiskey, rocks.”

When I came back to town, Jeff had already bought this place, cleaned it up and reopened it. That took him almost a year, but somehow, in all that time, nobody ever mentioned to him that his retirement dream was also a longtime suicide destination. And not just for people from up and down the coastline, either. Growing up, police were always finding cars around here from six and seven states away, folks who had driven hundreds of miles to end their days at our cliffs.

Folks drove hundreds of miles to end their days at our cliffs.

Now, it seemed, Jeff had given them back a hotel and bar to visit first.

While he was still digesting this information—Should he add a mental-health counselor to his staff? Put a suicide hotline on the hotel’s checkout information? Try to sell and get out?—disaster struck. The New York Times published a travel story.

“The Heights is beautiful and romantic,” it began. “And deadly.”

Others followed. More reporters, more stories. In town, no one cared that the property had a new name or a million-dollar dust-off; everyone started calling it “that dead-tourist bar up on the cliffs.” Half the employees that Jeff hired quit on him. And that’s how I came into things, back into town and already starting to think it was not such a good idea. I’d been crashing on Katie’s couch, which was covered in cat fur even though she didn’t seem to have a cat, and her five-year-old son kept trying to cut my hair while I slept.

“You should get a job with me,” Katie told me. “It’s busy up there. I don’t know why. I mean, it’s sort of creepy. One of those reporters said we were like the Bermuda Triangle or something. But I’m making mad cash. And Jeff’s cool, he’ll hire you. He doesn’t know anything about you, either, so don’t worry.”

I had twenty-four dollars to my name, so I left my old car at Katie’s to save gas and made the long trek up to the turnoff that led to the cliffs. It took me more than an hour to reach the bright new metal sign that read “The Heights,” the name Jeff had chosen. In my bag was another shirt, a button-down with a collar, and I ducked behind the sign to change.

Jeff had cleared the way to the cliffs when he renovated the property, widening and paving the road. When I grew up here, there were boulders piled over to one side to mark the way up. As I peeled off my sticky tank top, I saw they were still there, pushed over behind the hotel sign, forgotten. I remembered what Katie had said about the Bermuda Triangle. But that was stupid, wasn’t it?

They didn’t find my mother’s car up here, but that wasn’t a problem for him.

I don’t know much about geology, but I thought about how those boulders must be made of the same stuff as the cliffs. Yet here they were, crushed and reduced to rubble. They were nothing but trash, easily disposed of.

Jeff gave me the job that day and I started work that afternoon. Like Katie said, he didn’t ask a lot of questions. He had a lot of instructions, though: we were to be watchful for clear signs of distress in our patrons. Watchful, but sensitive—we didn’t want to alarm other guests. We should be careful about how much alcohol we served, shouldn’t let our guests become so intoxicated that they made impulsive decisions. (“Isn’t that the point of drinking?” Katie wondered.) If we sensed there was cause for concern, we should try to encourage the patron to remain on the premises, then contact Jeff immediately, as well as the authorities.

Of course, the problem with a bar is that people are always coming and going. And The Heights is a big area, acres and acres of cliff face, lots of places for people to make impulsive decisions.

Fortunately or unfortunately, few people are as public as the man two weeks ago. Most pay their tabs, although a few don’t. I guess it’s the difference between wanting a last bit of closure or a final fuck you all. Then they disappear quietly, little dots at the end of a sentence, off to some other part of the property. A few days later the police come calling, usually holding a photo and asking if anyone had seen this person in the past week.

The new customer at the bar is still here, though. Looks like he needs another drink, too. Maybe I’ll give him a double.

“Top it off?” I ask, reaching for the bottle in the well.

He nods, like I know he will. I notice that one of his tattoos says “Jessica,” written in broad and loving cursive, which enrages me, and I fill his glass all the way to the rim.

“Thanks,” he says, lowering his head to take a sip.

I’m surprised Katie didn’t recognize him. But she didn’t really know him the way I did. And from what gossip I can gather, he’s been gone for many years, just like me. Something’s called him back here now, though, and told him it would be fine to come up to the cliffs. Maybe it’s the same something that told him it would be smart to etch my mother’s name onto his forearm and then take a seat at my bar. Seriously, he should really stop listening to that something. 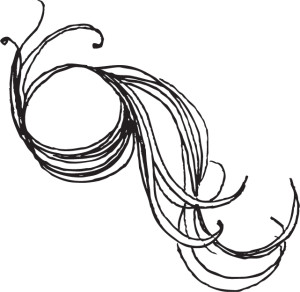 The second whiskey goes down even faster than the first, and now he’s ready for his third and fourth. I pour them without looking at the man or the glass, still trying to decide if he knows me. I thought he did, and now I’m not so sure. I took his avoidance for recognition, for embarrassment. For guilt. But that was my mistake. He doesn’t go in for those.

I already know he’s the kind who’s going to skip out on his tab.

They didn’t find my mother’s car up here, but that wasn’t a problem for him. He told everyone she walked up. I knew that couldn’t be true, that he’d brought her up here himself. She’d slipped that morning and twisted her ankle. Only a sprain, but enough to keep her at home all day, smoking on the couch and sweating in the summer heat. Enough that she couldn’t walk more than a few feet.

They’d been arguing for weeks, her threatening to leave him and him telling her to try. I did the same thing I always did: went in my bedroom and wished I were a year older. Then it all stopped. My mother limped to the stove to make cheeseburgers and we all went to bed. A few hours later, they were in the living room again, playing cards and drinking. They looked burned out and stale, not like my living mother and her boyfriend, but like an old VHS video of them I’d found in a box and played again after many years.

In the morning, he was there and she was gone. Her body was found a week later, washed up down the coast.

I didn’t wait another year. I took my mother’s car and drove through town, then past the boulders at the turnoff to the cliffs, and on through the six or seven states I’d known only as license plates on abandoned cars. After that, I kept driving. I knew it was crazy, that I’d have to turn around and go back.

Which is how I ended up behind this bar. My customer reaches forward to pick up his glass, but knocks it over instead, his hands heavy with the whiskey.

He looks at me for some pity. Some understanding.

Elizabeth Kellar is a former daily newspaper reporter turned freelance writer. She splits her time between Florida and Oregon, loves Argentine tango, and is currently at work on her first novel, a mystery. Her blog is www.differentwayback.com