What’s Going On In… Antananarivo, Madagascar

Spanning several hills lined with steep ancient stairways in Madagascar’s central highlands with a heart-shaped lake and sprawling shanty towns alongside stately French colonial architecture and historic palaces, Antananarivo is a city all its own, and, with inner-city rice paddies and overcrowded markets, not for the faint of heart. Known to the locals simply as Tana, filled with poverty, creative energy, and flowers, Madagascar’s largest city is the thriving hub of unique highland cultures.

For nearly four decades, veteran acoustic musician and vocalist D’Gary has blessed his native Tana and the world with rich melodies and his raw, soulful voice. With musical roots firmly planted in the traditional highland styles, D’Gary uses his own ingenuity and jaw-dropping talent on the guitar to create a truly beautiful sound, part timeless Madagascar and part unexpected.

The 2013 debut of Madagascan filmmaker Haminiaina Ratovoarivony, road dramedy Malagasy Mankany (Legends of Madagascar) tells the story of three college students who must journey together from Antananarivo deep into the countryside to assist with a family emergency. Along the way, they test the limits of friendship and discover the people, issues, and spirit of their nation. Watch the official trailer here.

Tana native Michèle Rakotoson writes novels, plays, and short stories, most of which take place in a Madagascar rife with rich imagery, traditional customs and human tragedy. Despite living in Paris during much of her writing career, Rakotoson’s style is known for its unflinching realism and social commentary. Most of her work is in Malagasy and French, but a few short stories have been translated into English for anthologies of African literature, such as The Picador Book of African Stories and From Africa: New Francophone Stories.

Kobandravina (also called koba) is a dessert specialty of the highlands. Mashed banana, crushed peanuts, honey or sugar, and corn flour are blended into a batter, wrapped in banana leaves and steamed into a sticky sweet cake, sold by the slice on the bright streets of Tana. Check out a recipe here.

Isoraka is a relatively quiet neighborhood by Tana standards, but with lots of up-and-coming restaurants and nightlife mixed in to the residential streets along the shore of Lake Asoka. The neighborhood’s famous historic landmark, Rainiharo’s tomb, houses the remains of the former prime minister and his sons in a massive Victorian structure replete with columns and archways. The flower market runs here seven days a week, bursting with stall after stall of lavish blooms, indigenous plants, and hawkers hustling to make a deal. 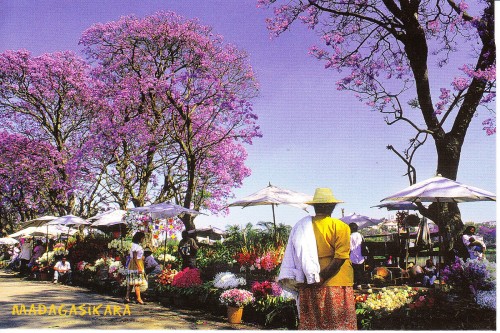