Learning to Cook in Africa 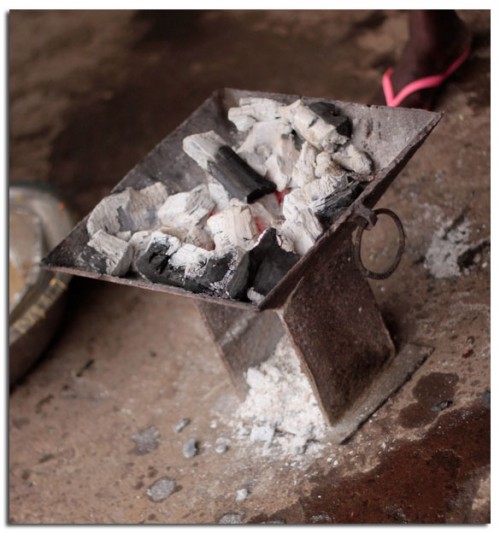 A typical charcoal cook stove used in northern Madagascar weighs as much as two cans of green beans, give or take a few grams, and is constructed from a similar type of metal.

To the neophyte, the cook stove resembles a small stool. The stove has handle and can be easily transported. It sits upon a circular or square base and is buttressed by a column filled with charcoal. The “burner” resembles a large salad bowl. It is worth noting that there are few fresh salads here. It is too hot to grow them. Carrots, cucumbers, green beans or lettuce are trucked in from more temperate locales. They are considered delicacies.

On my first day in Madagascar, I sat down on one of the stools, ahem, stoves in the large open-air market. The mpivarotras, or salesladies, were aghast. They loved it. Who sits down on a stove? they wondered. I was taking a rest, I tried to explain. Negotiating for tomatoes, onions, garlic and dried fish in Malagasy can be trying business.

How to light a Malagasy stove? Go outside.  Fill with charcoal. Splash with diesel fuel. Flick a match. Douse with patience. Swing stove from side to side, like a pendulum, allowing the oxygen to permeate coals. You will resemble the local priest with his incense burner. You will utter some magical incantations of your own. They will unfit to print.

Most cooking takes place on the tokontany, or yard, where ingredients like rice, dried white beans, grilled fish and zebu meat will boil, smolder and steam for hours in the open air.

Many years later, you will catch a whiff of someone’s backyard barbecue. The smoke and diesel fuel ignites that ancient part of the brain. There was something meditative, you think, about those months swinging the stove in tropical twilight, all the while longing for a microwave. You will remember how, the first time, it took two hours to light. The second time? An hour and a half.  After much trial and error, you were proudly able to light the stove in thirty minutes. You will recall your six year-old neighbor preparing her family’s stove in under five minutes. You will jettison any conception that the world is fair.

You will feel guilty. Many trees are felled for cooking fuel on the Big Red Island. This causes deforestation, which contributes to erosion. From the air, Madagascar seems to be disappearing into the ocean.