Out of Nowhere: Nick Flynn in Tanzania

Occasionally we’ll revisit an article from Nowhere’s past. From Issue 6, Nick Flynn scours a remote island off the coast of Tanzania for gum wrappers and other ephemera.

When I find myself in a new city or town, at least until I know where I am, I give myself a daily task. Each day I must locate three (sometimes more) pieces of ephemera—a scrap of paper, a gum wrapper, a shopping list, a child’s drawing—with the intention of making a collage. Ideally I will finish the collage by the end of the day, and the next day I will begin a new one. To call what I’m looking for trash is accurate, as it is usually something that has been discarded, hopefully even walked on, definitely exposed to the weather, but not for too long. I like the effects of weather on paper, how it seems to contain time. I don’t pick through trash bins—I have to find it underfoot. I’ll spend the whole day searching for these three scraps, with a simultaneous task of finding a piece of cardboard to arrange them on. I also have to locate a stationery store, where I can buy rubber cement, or a glue stick. It’s preferable if the cardboard has an image printed on it—a label indicating what the box once held (oranges or safety pins), a number or a logo. The scavenger hunt helps me get through the first day or week. I get to know the city this way, find out where I am.

In 2002, for a month—maybe five weeks—I found myself on Chole, an island in the Mafia chain of islands, off the coast of Tanzania, in the Indian Ocean, south of Zanzibar. To get there we flew from the capital, Dar es Salaam, a short flight in a small plane, then an even smaller plane to the main island, then a Land Rover across the island to a beach, where we took a wooden sailboat—a jahazi—to Chole. The whole trip took a day.

I didn’t expect to find much in the way of ephemera on Chole. The island is remote with no electricity, no cars, no running water and no roads. The paths, though, were littered with some of the most amazing trash I’ve ever found, anywhere. Much of it was the same litter, dropped again and again. There were very few products that people could buy on the island. Whatever there was, the wrapper ended up on the ground. Same with pages from school notebooks, even though there was a single, one-room schoolhouse and a notebook seemed like a valuable thing. 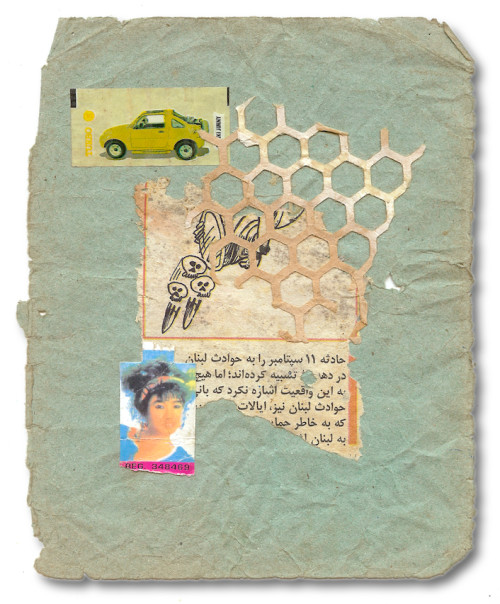 What impressed me most were the tattoos that came with each stick of gum: images of cars, mostly, which kids printed up and down their arms. (Even though most of them had never seen a car.) What would be the equivalent? Maybe the elephant tattoo my daughter has on her arm. The kids always tossed the wrapper, which displayed an image of the tattoo waiting inside.

The shop that sold the gum was a vertical wooden box, big enough for someone to stand in. You could also buy cooking oil, rice, matches, candles, bottled water, bananas and sweet cookies there. I don’t know if a sticker of a cellphone came with the tattoo, though I wouldn’t doubt it. I imagine the cellphone drawing—a paper phone—came from the image on the sticker, or one like it. This, after all, is how many things imagined became real, by first owning the image—own the image and you own half the thing itself, Jung said.

I like the effects of weather, and I also like the effects of someone’s hand—a drawing on a scrap of paper, a list written out and discarded, the way paper can have several lives. I was as far away from my life as I have ever been. If I find more than three scraps I will, sometimes, put them all together and discard one, so that by the end of the day I only have three—that somehow speak to each other, though I don’t yet know what they are saying. It’s the language of this strange city and island.