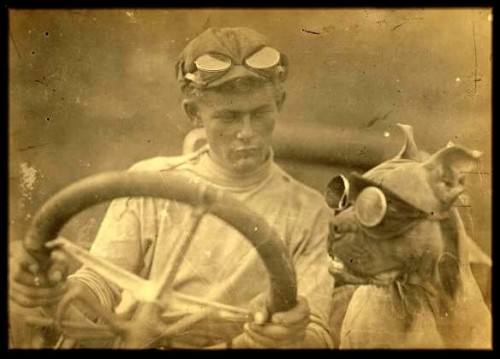 Out of San Francisco on May 23, 1903, rolled retired doctor Horatio Nelson Jackson and ex-bicycle racer Sewall K. Crocker, buzzing along in a 20-horsepower cherry-red Winton touring car. Nine weeks later, in the early hours of July 26, they crawled across Manhattan’s Fifth Avenue with Bud the dog in tow, winning a $50 bet that they couldn’t make the first cross-country road trip.

What ended in fanfare began on a whim. Four days before the trip, 31-year old Jackson found himself enmeshed in a gentleman’s club debate over the future of the “horseless carriage,” the bet being that he couldn’t make it to the Big Apple in less than three months.  Within days, he had recruited biker and engine mechanic Crocker as his partner and bought the used Winton for $3,000, which he dubbed “Vermont” in honor of his home state. 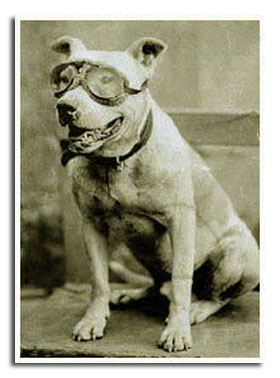 Traversing a landscape void of road signs and gas stations—and with only 150 miles of paved roads, largely clustered around urban areas—the men crossed rivers on railroad trestles and relied on cowboys to tow them out of sand dunes. After 19 days hand-moving boulders in their path and counting on stagecoaches for back-up parts, they hit Idaho, where Jackson paid $15 for a bull terrier named Bud. Outfitted with driving goggles to block against the ever-blowing dust, the dog joined their cargo of sleeping bags and cooking gear.

In a letter Jackson wrote to his wife Bertha after a hungry 36 hours lost in the Wyoming badlands, he quipped that he and Crocker “were stealing speculative glances at Bud as we tightened our belts,” while “thirty thousand mosquitoes died on the back of my neck.” 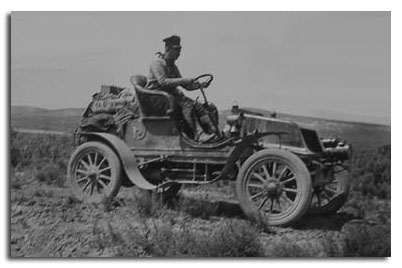 Fueled by Jackson’s fierce optimism — his mantras were “the worst of it is over” and “just watch me now” — the crew chugged eastward, averaging 150 miles a day and sparking headlines of “It Startled the Natives” and “A Real Live Auto.” With telegraphs heralding the Vermont’s approach, flag-waving crowds lined the streets of towns as the crew approached the Atlantic.

Though both Packard and Oldsmobile sent their own cars from California to try to surpass Jackson, the Vermont triumphantly maintained its lead, traveling more than 4,500 miles and arriving with a month to spare. With $50 in his pocket and $8,000 consumed in trip expenses, the newly crowned national celebrity returned home to Vermont with his wife, where, upon entering the Jackson home stable, the car’s drive train snapped in two.