I keep a daily field journal, like a diary, when I’m traveling on assignment or for book research, as a supplement to my reporting notebooks. In the notebooks I record moment-by-moment observations, quotes, data, impressions; in the journal entries, usually written early the following morning or a day or two later, I recall the high points, the basic facts and activities and the narrative shape of the day, if it had a shape. This journal entry (below) comes from Romania during September 2000, while I was researching the subject of brown bears (the species Ursus arctos, which includes both the European brown bear and the grizzly) for my book on big predators, eventually published in 2003 as Monster of God. Romania was important to me, and I had made a number of trips there because the country happens to support the largest brown bear population anywhere in Europe—an artifact of the bad years of its Communist dictatorship under Nicolae Ceauçescu, who fancied himself a bear hunter and protected the species against killing by anyone but himself. While there, I also got interested in the extinct Pleistocene cave bear, Ursus spelaeus, a wondrous giant, larger even than the grizzly. I heard about a famous cave in the western province of Romania, Transylvania, in which a natural trove of cave-bear skulls had been found. It was known as Pestera Ursilor, which to the best of my recollection means “the bear cave.” 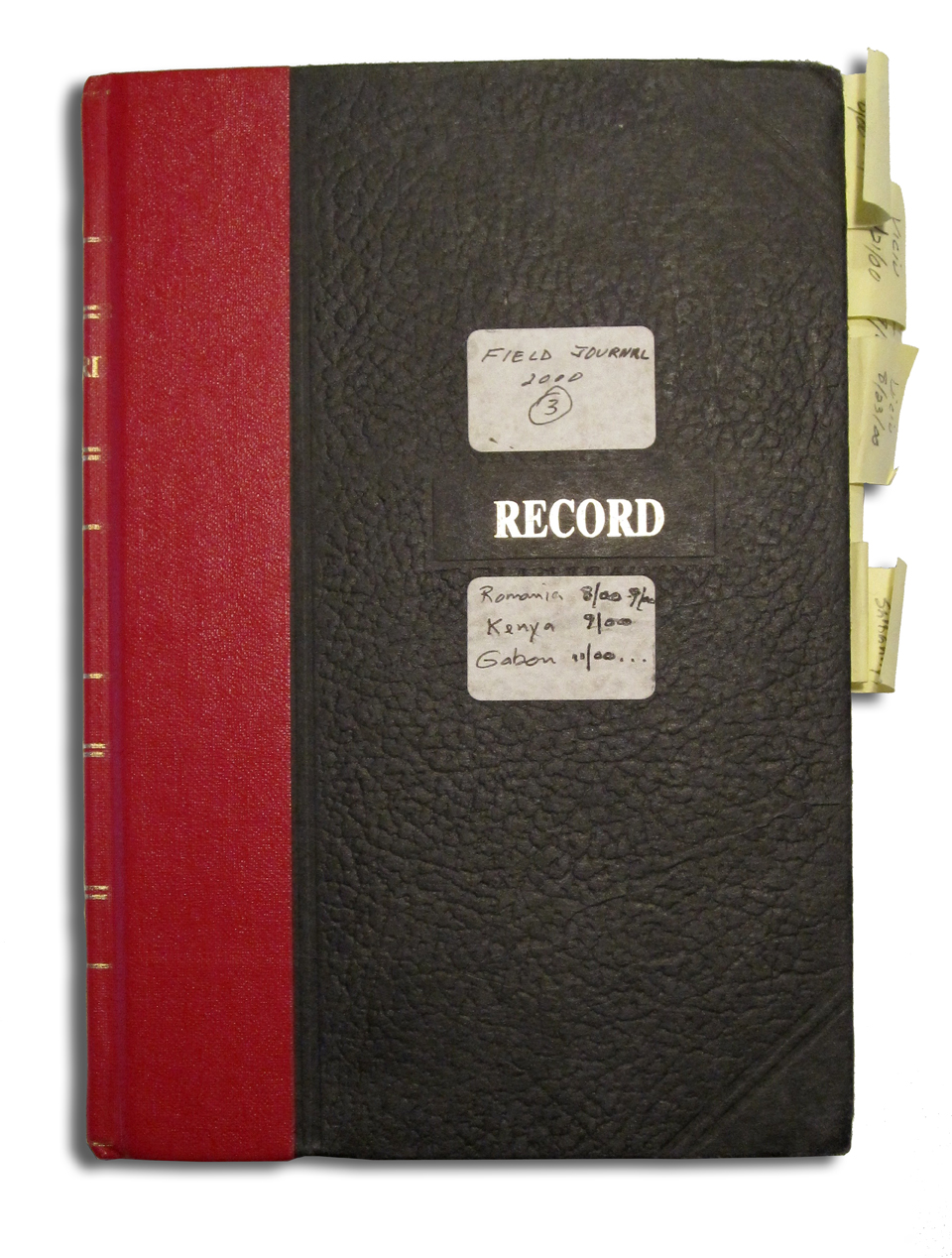 M  y regular translator was committed to someone else (the ubiquitous BBC nature unit, damn their hides) in September 2000, so he referred me to his brother-in-law, a fellow named Christi Raab. Raab, a tall, robust young fellow, former ski instructor, was now a welder at the local power plant in Brasov, Romania, a mountain town in the Carpathians. He was glad for a chance to make a few bucks doing something else. I arranged with him to travel westward into Transylvania with me, as translator, in search of the bear cave.

This trip occurred in the midst of travels every which way both for the book project and for National Geographic assignments in Central Africa.  I would fly to the Republic of the Congo or to Gabon and spend two weeks walking through the jungle with a crazed explorer named Mike Fay; fly back up to Paris and rest for two days, eating well and healing my feet; then fly to Romania for another spate of research on bears. At the same time, I was going through a painful and unasked-for termination of a marriage.  I was lonely and exhausted, kept going mainly by the challenge and meaning of my work. I remember well this particular time in Romania, even without the journal entry, I think, because it was perhaps the happiest night I spent during the year 2000. The entry here is as I scribbled it, without editing, polishing or other improvement, except for several square-bracket parentheses added for clarification.  It’s not dramatic, nor intended to be—just a day’s quickly recorded memories, a thin slice of life on the road.

C hristi and I drive to Pestera Ursilor, him doing most of the driving. We go the southern route, via Sibiu, Sebes, then up the road that carries truck traffic between Hunedoara & Oradea (and beyond, into Hungary and Germany). The craziest & most dangerous of all drivers on Romanian roads, CR says, are the Turkish truckers, trying to make time with their fresh produce. The other drivers, in my view, are also crazy and dangerous enough. Passing a truck in the opposite lane on a blind curve and/or hill is routine; head-ons are not rare, since everyone is dreadfully surprised that someone else, from the opposite direction, might be passing on a blind curve too. 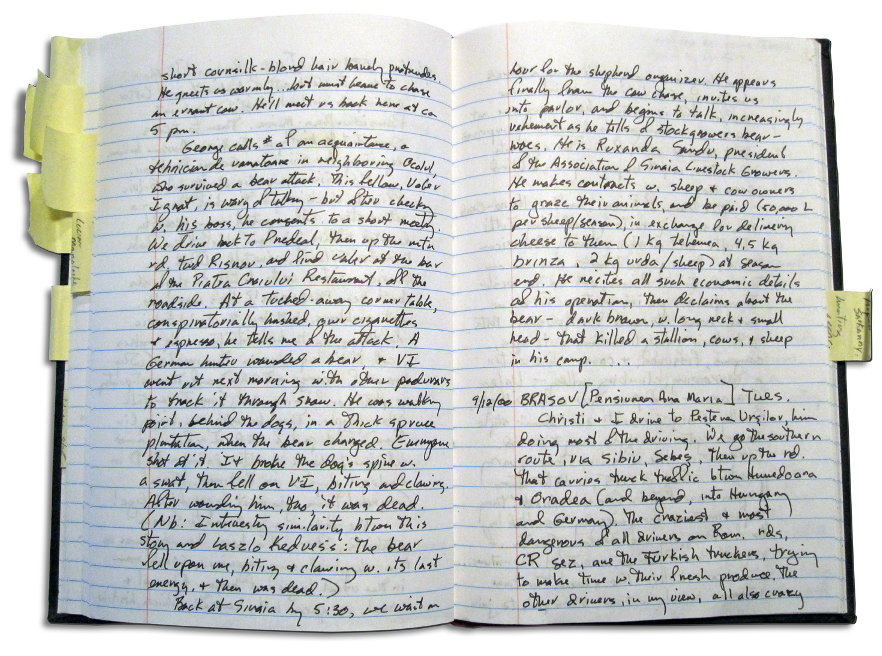 T he town of Rieni, on the Hunedoara-Oradea road, has a big factory producing Tutti Frutti soft drinks, including “American Cola,” their green trucks common on this road. From Rieni, out on its west-Transylvanian plain, we turn east on a small road toward the Apuseni Mountains, with their many limestone outcrops, canyons, fissures, & caves. We enter a narrowing, climbing valley—Valea Craiasa—and pass through a few villages, finally Chiscau, with old “Saxon” style houses-gates-courtyards snug to the road. Chiscau is the site of a limestone-quarry operation. Back in 1975, a detonation to open more of this (marble-mixed? they say) limestone for quarrying resulted in the discovery, by one Traian Curta, of a great cave filled with beautiful formations…and bear skulls. We reach the cave entrance barely in time, 5:05 pm, to join the day’s final tour.

Just inside the entry, as you walk a concrete catwalk, you begin passing skulls, femurs and other bones of Ursus spelaeus (and 100 lei coins tossed down by visitors), the cave bear, littering the floor, left just where they’ve lain (so we’re told) for 17,000 years. Some are iced-over with calcium carbonate drippings & cemented to the floor. In all, our guide says, remnants of 141 bears were found. Most of them are in the Rezervatia Stiitifica, a gallery below & beyond this one, open only to researchers. Why were the bears here? I ask. They lived in colonies, claims the guide, and a rock-slide trapped them. About that, I’m dubious. 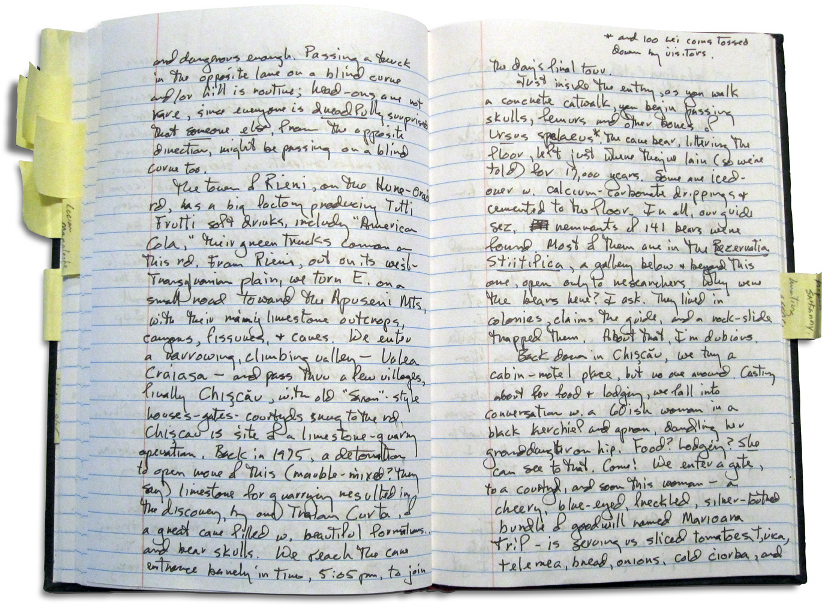 B ack down in Chiscau, we try a cabin-motel place, but no one around. Casting about for food & lodging, we fall into conversation with a 60ish woman in a black kerchief and apron, dandling her granddaughter on hip. Food? Lodging? She can see to that. Come! We enter a gate, to a courtyard, and soon this woman—a cheery, blue-eyed, freckled, silver-toothed bundle of goodwill named Marioara Trif—is serving us sliced tomatoes, tuica [homemade Romanian plum brandy], telemea [Romanian sheep cheese], bread, onions, cold ciorba [soup? I forget] and slanina [slabs of smoked pig fat] at a little outdoor table.  The house, her daughter’s place, has a TV antenna, & Marioara gives her granddaughter an ugly plastic-packaged “croissant” even while feeding us real food. She seems thrilled and amused, and tries to pack us to satiation. Then we drive with her ½ kilometer further up the valley to her house, in the tinier village of Giulesti. Her husband, a jockey-small man named Traian [like the cave discoverer, but presumably not the same fellow—I neglected to ask!], quietly accepts the fait accompli that Marioara has welcomed these two weird travelers into their home. Christi takes one room with bed inside, and I seize on the option of a bed set outside against the back wall of a roofed area between house & barn. We pull the car up into their courtyard (Traian insists) & close gates. Visit a little longer, & Marioara serves us raspberries, & blueberries, preserved in syrup. Then lights-out at 9:30. And I am left with an unearthly-beautiful full moon shining in over the courtyard wall, onto my bed beneath the corncrib loft. Can’t resist saying “I’m loving this now” aloud as I slide into my sleeping bag. Middle of night, I get up, go out to pee in the orchard, and the dog doesn’t bark at me when I come back in.

David Quammen is a freelance journalist and author whose eleven books include fiction, essay collections and the nonfiction titles The Song of the Dodo, Monster of God and The Reluctant Mr. Darwin. His short work has appeared in a range of journals, from Rolling Stone and Sports Illustrated to The New York Times Book Review; for fifteen years he wrote a column on natural science for Outside magazine; more recently he has worked mainly for National Geographic and Harper’s. He is also the general editor of an illustrated edition of Charles Darwin’s On the Origin of Species. He has received an Academy Award from the American Academy of Arts and Letters, a Guggenheim fellowship, the John Burroughs Medal for nature writing and (three times) the National Magazine Award.  In 2009 Quammen finished a three-year term as Wallace Stegner Professor of Western American Studies at Montana State University. His essay “Planet of Weeds” appeared first in Harper’s (1998) and has since been reprinted in Best American Essays 1999 (edited by Edward Hoagland), in American Earth (edited by Bill McKibben) and in an expanded edition (2008) of his own early collection, Natural Acts. His current book project involves the ecology and evolution of scary viruses. The research for that project has taken him to the Congo, Bangladesh, China, Borneo, eastern Australia and Butte, among other places. David lives in Montana with his wife, Betsy Gaines, a conservationist, and travels on assignment, by preference to jungles, deserts and swamps.