The Living and the Dead

At the beginning of a Sunday morning yoga class in Northern California’s Point Reyes Station, the instructor mentioned offhand to the students as we settled in for 90 minutes of vinyasa, “You just may see me in a Día de Los Muertos procession later today,” adding with a tempting flourish, “and you just may see me playing an accordion.”

We couldn’t pass up that offer, so we showed up at 4 p.m. in the bustling downtown, population 848, and waited. What we saw was extraordinary and moving. In this tiny peninsula town on the San Andreas Fault, which separates the Pacific from the North American tectonic plates, with a long, storied history of rancheros and ranchers, a slowly moving Día de Los Muertos procession wound its way through the streets.

Residents described this small gathering as an effort to bring together the separate “Mexican and gringo” members of the community. Previous processions in previous years had not been as large or unifying as this one.

The procession made a half dozen stops, where Aztec dancers danced and sang in front of memorial ofrendas, or altars, that had been set around town, including one in front of the saloon and one in an abandoned telephone booth next to the pharmacy, filling the air with the ancient incense of copal and prayers and songs for those who died to help them on their spirit journey. A children’s choir from the local school sang songs in Spanish; a “gringo” choir, featuring local musicians, actors and yogis, sang songs in memory and celebration of the departed.

The procession finally stopped at Toby’s, the local barn, feed lot and coffee shop in town. A large altar had been set up next to the bales of hay and pallets of horse, cow and pig feed, and everyone was invited to come forward and place a memento, typically a picture of a loved one. The ceremony ended with homemade posole, a traditional soup from Mexico, made by the Mexican-American community.

At the end of the evening, Elvira Xaxni, who had helped organize the event and bring the Aztec dancers, posed for a photo with Chris Giacomini, owner of Toby’s, in front of the sculptural artwork all created by hand for the occasion by local artist Ernesto Sanchez. It was a reflection of the multicultural coming-together on a day marking the memory of those who have passed, a joyous celebration of the Day of the Dead.— Marie-Hélène Carleton & Micah Garen 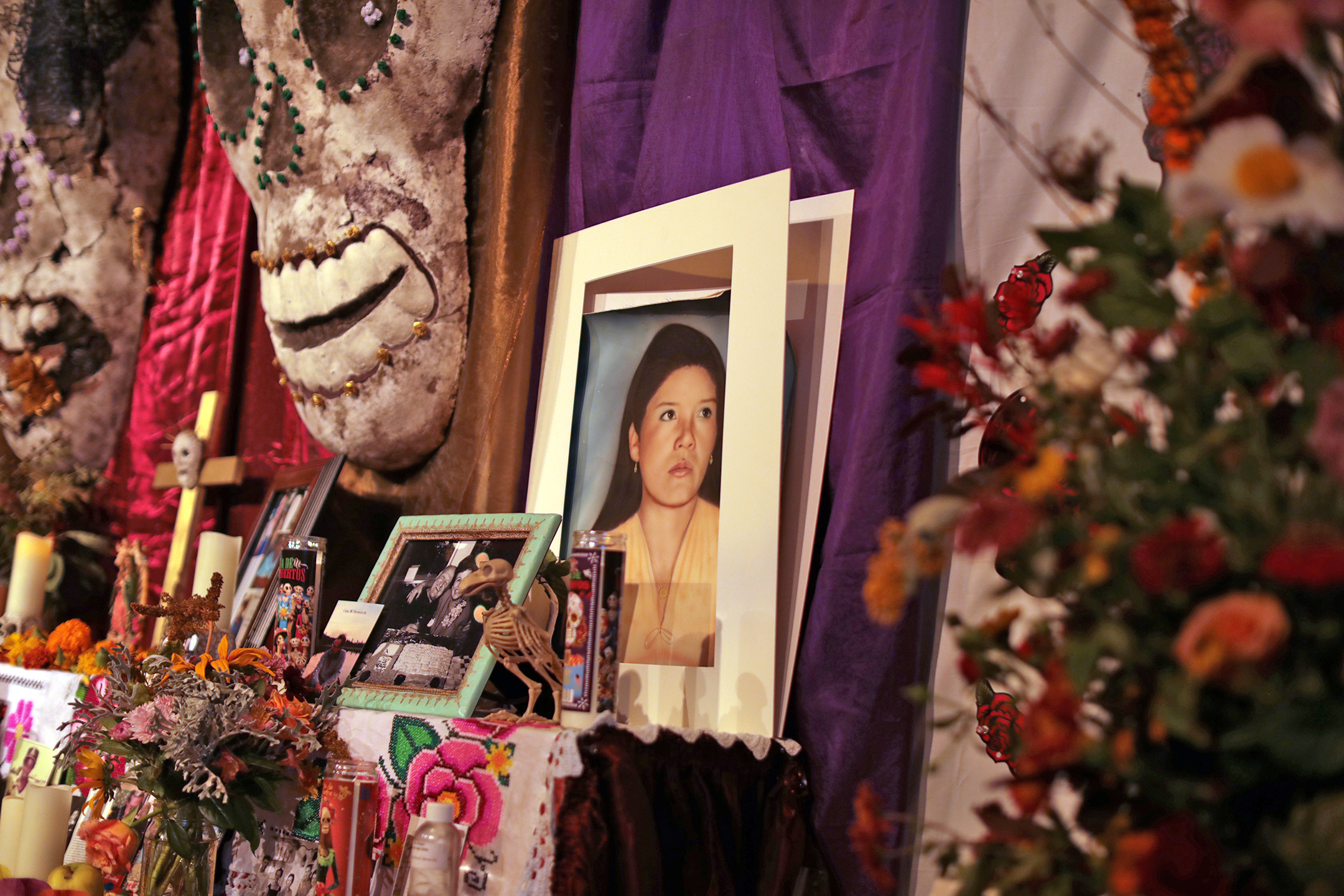 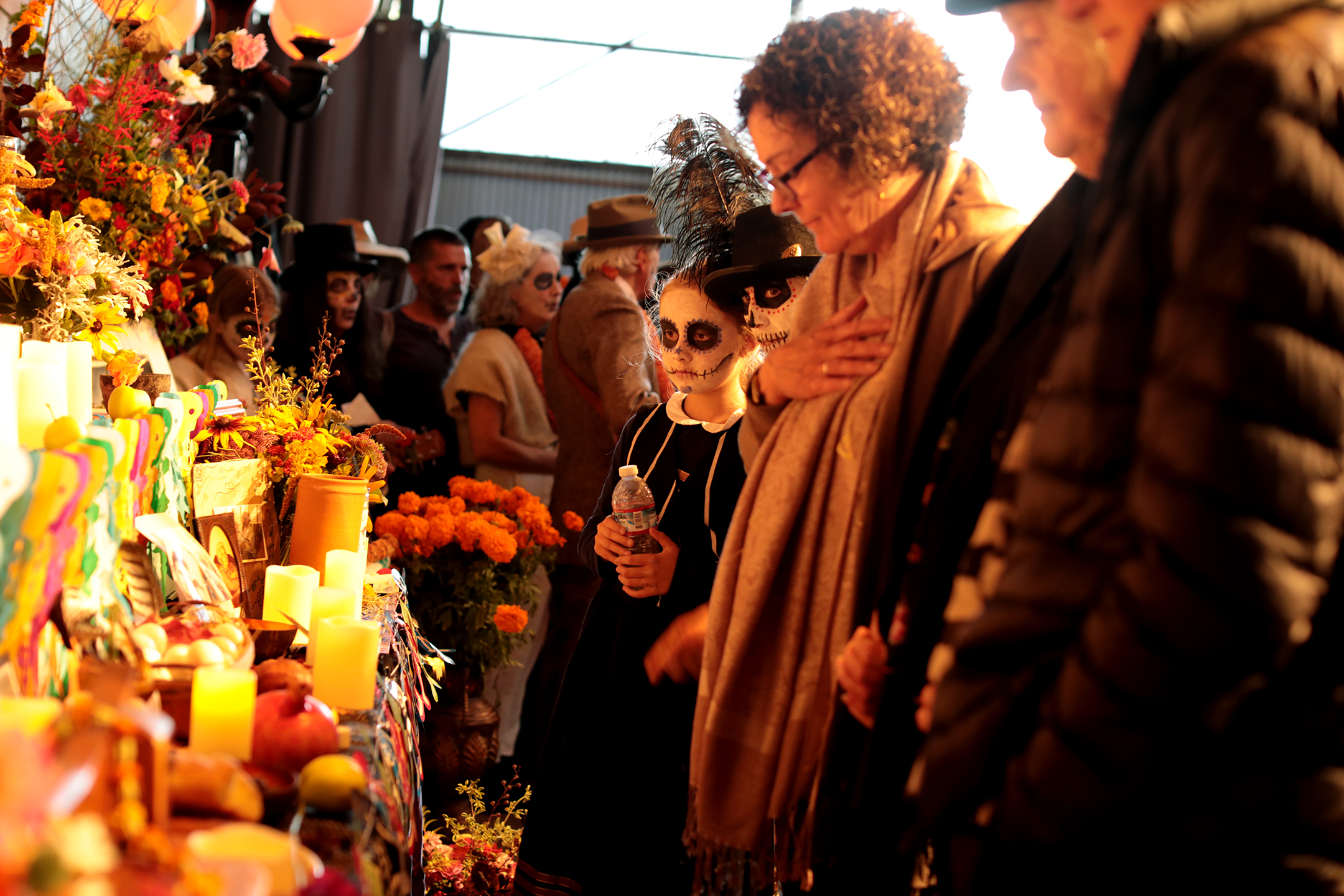 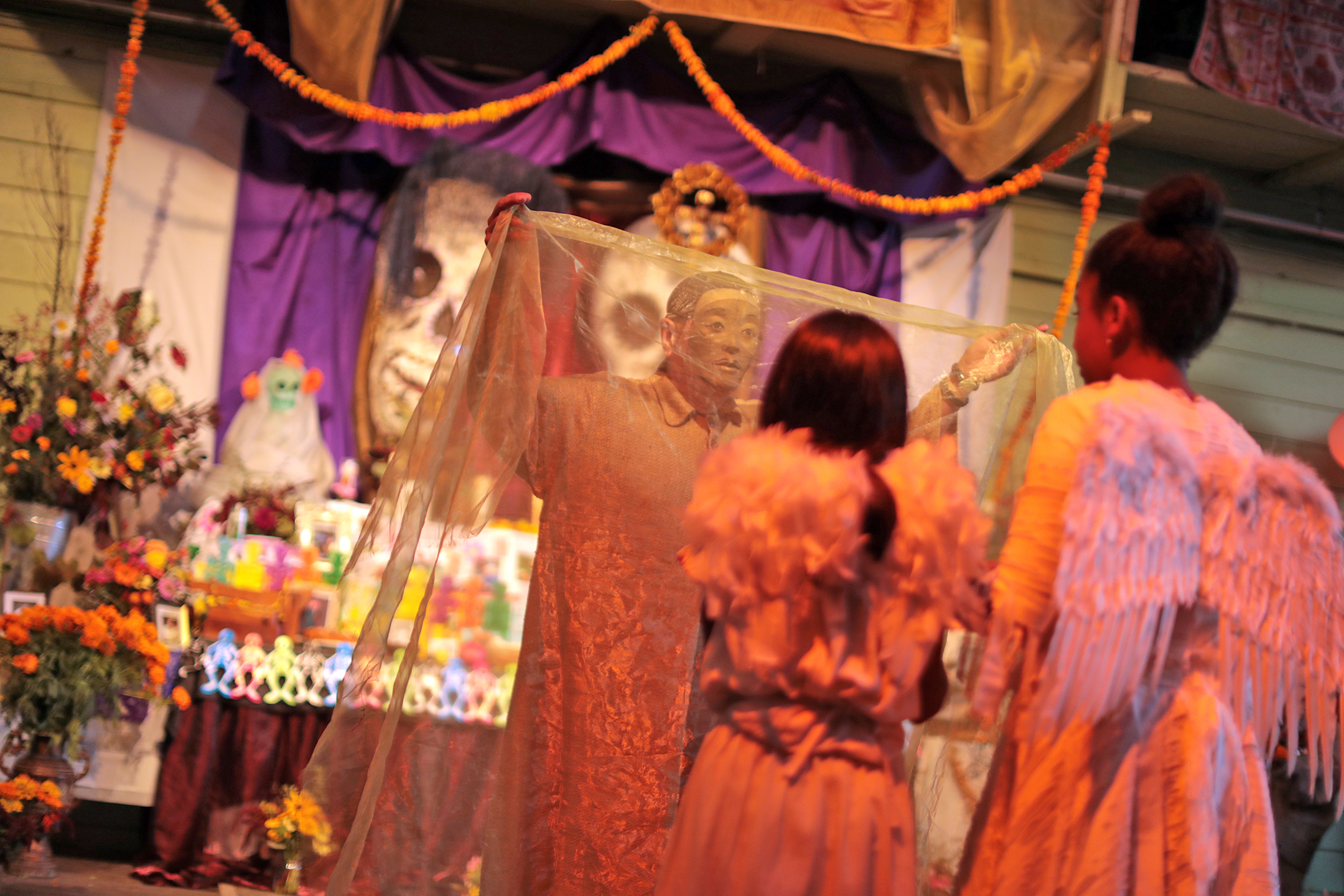 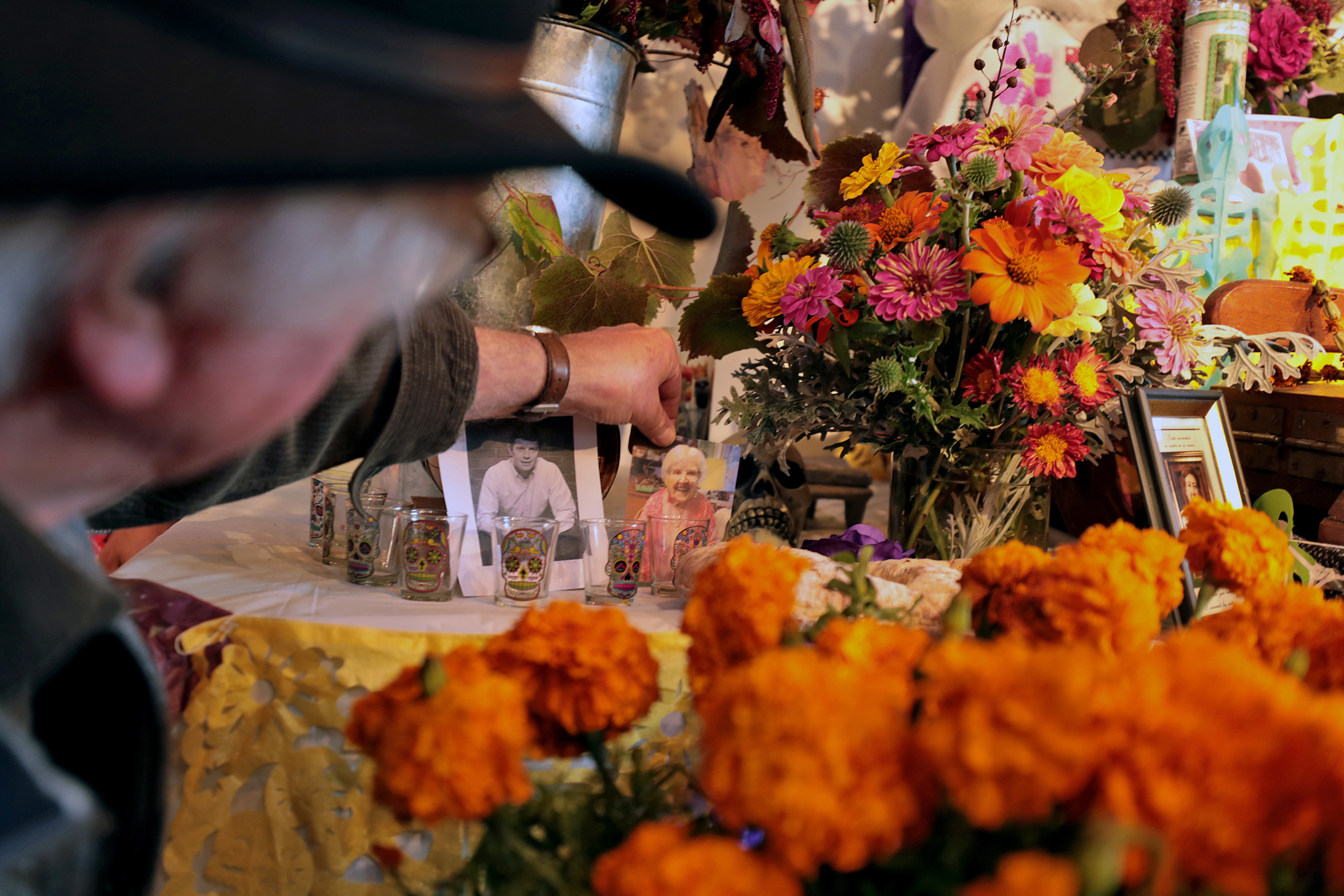 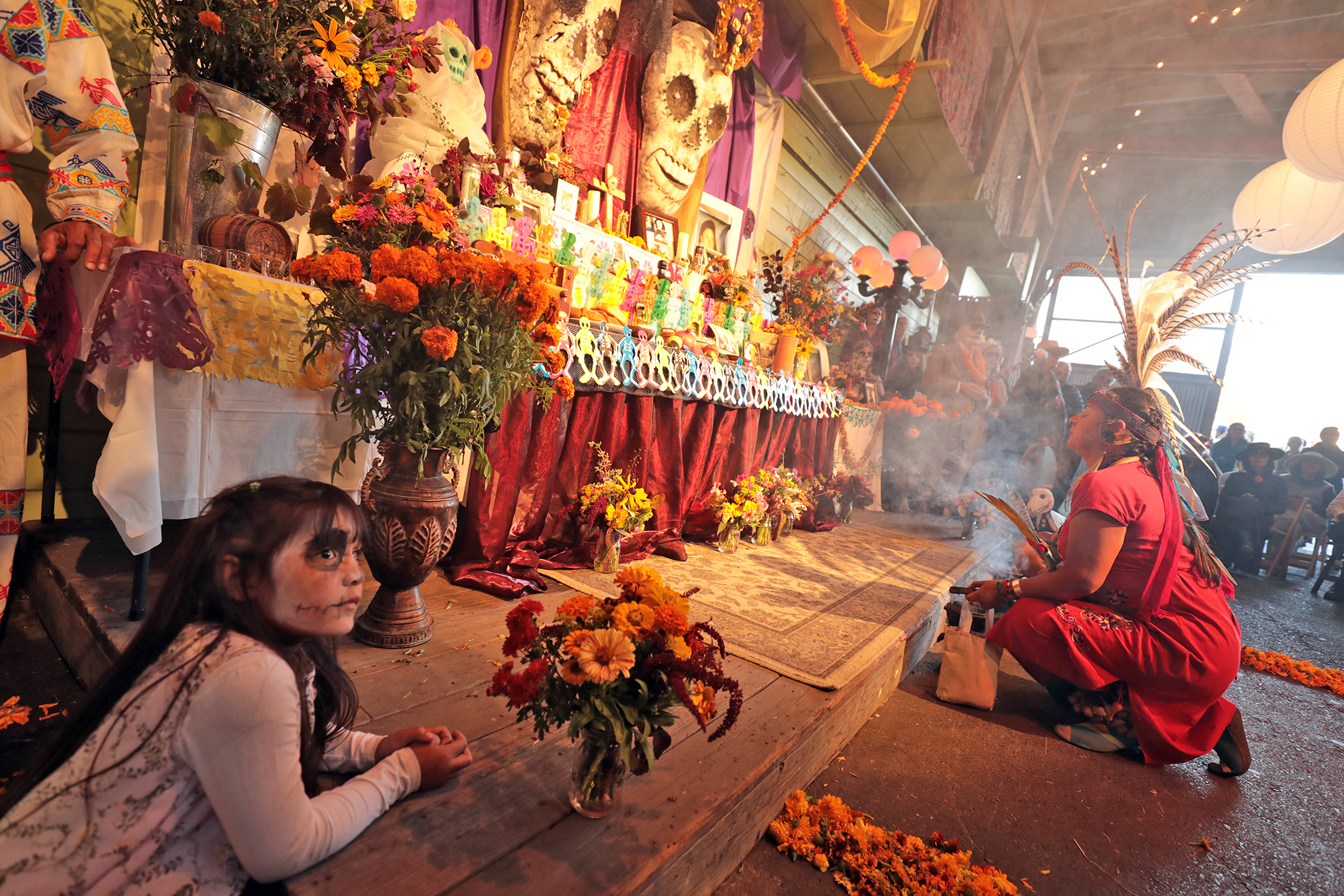 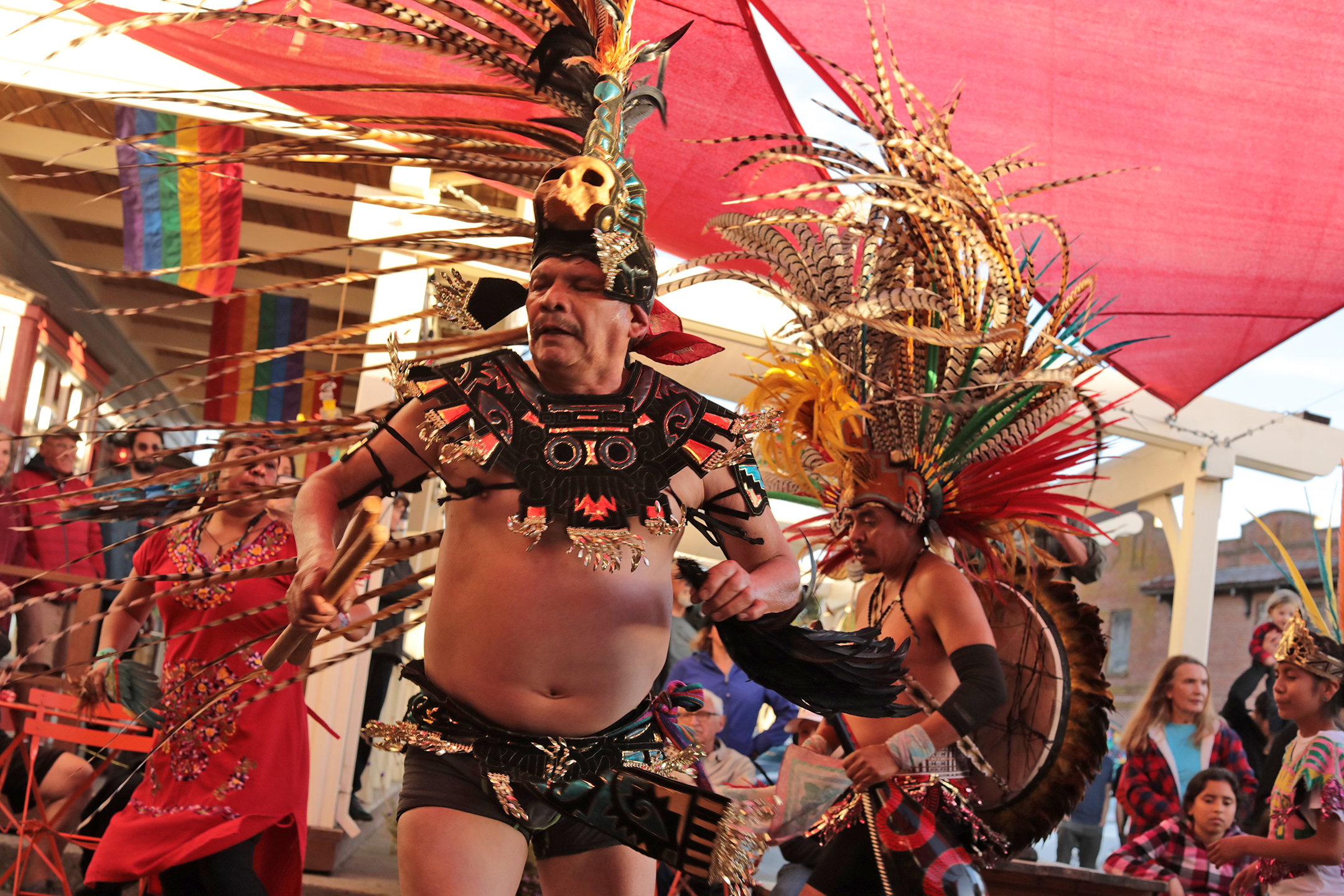 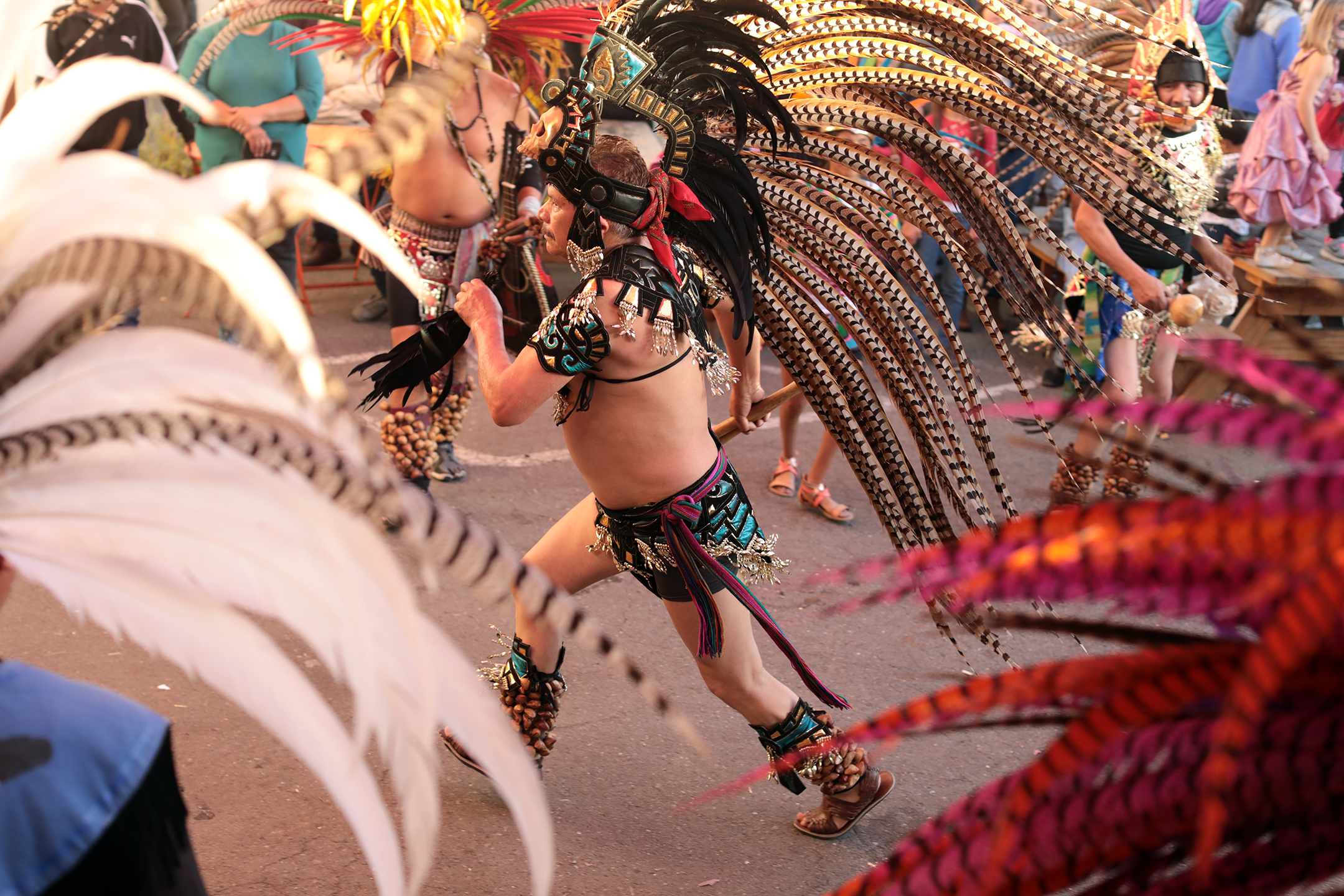 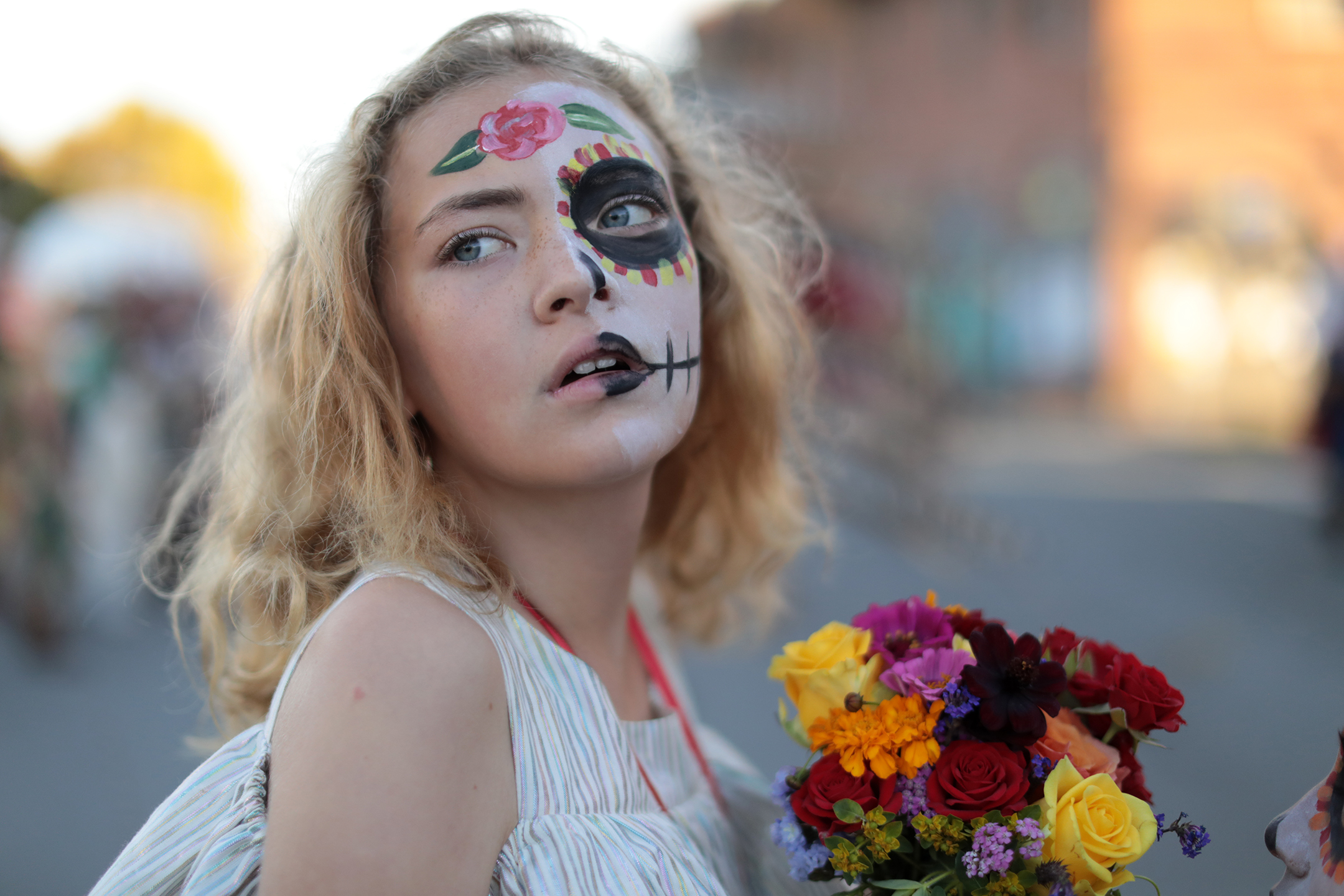 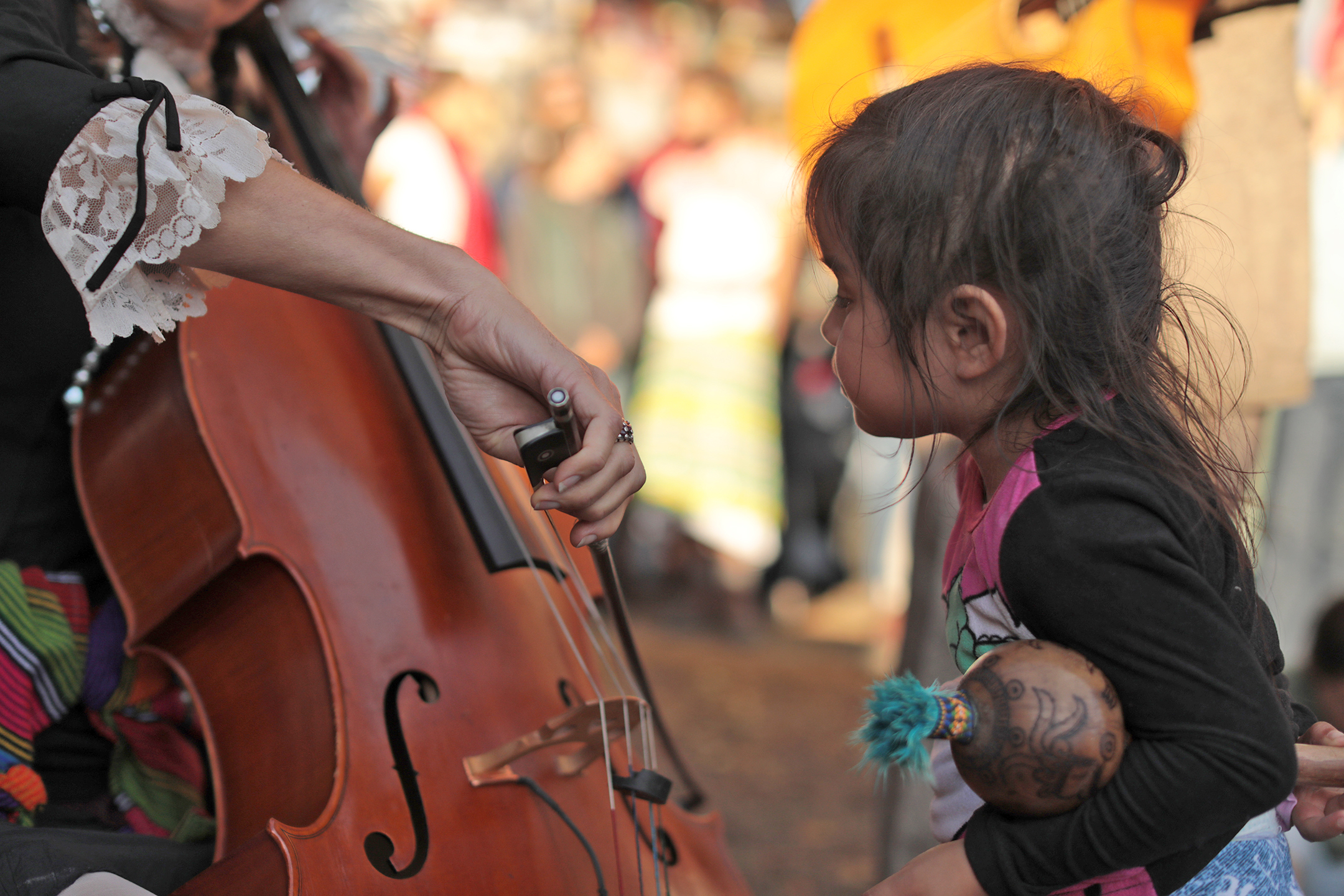 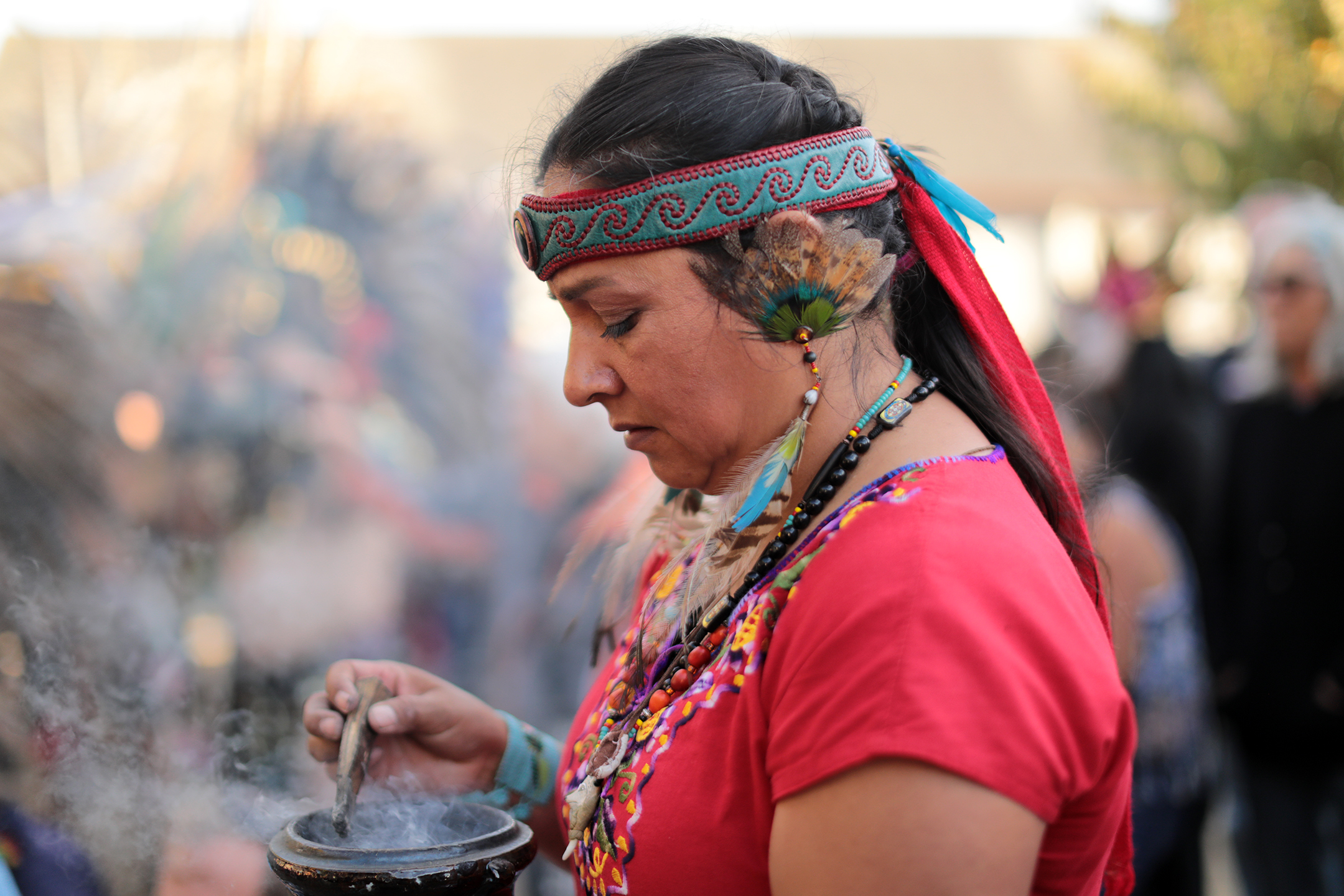 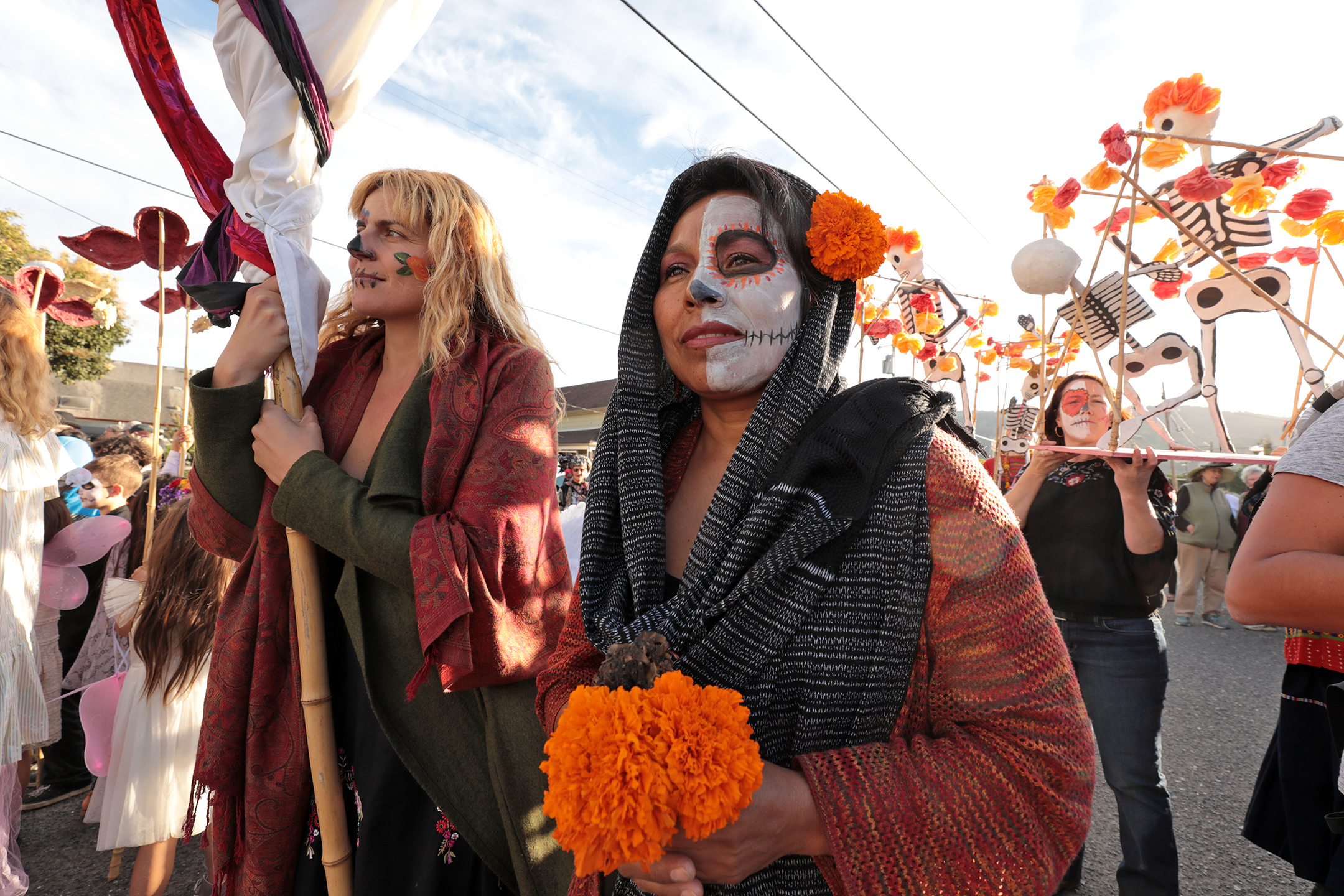 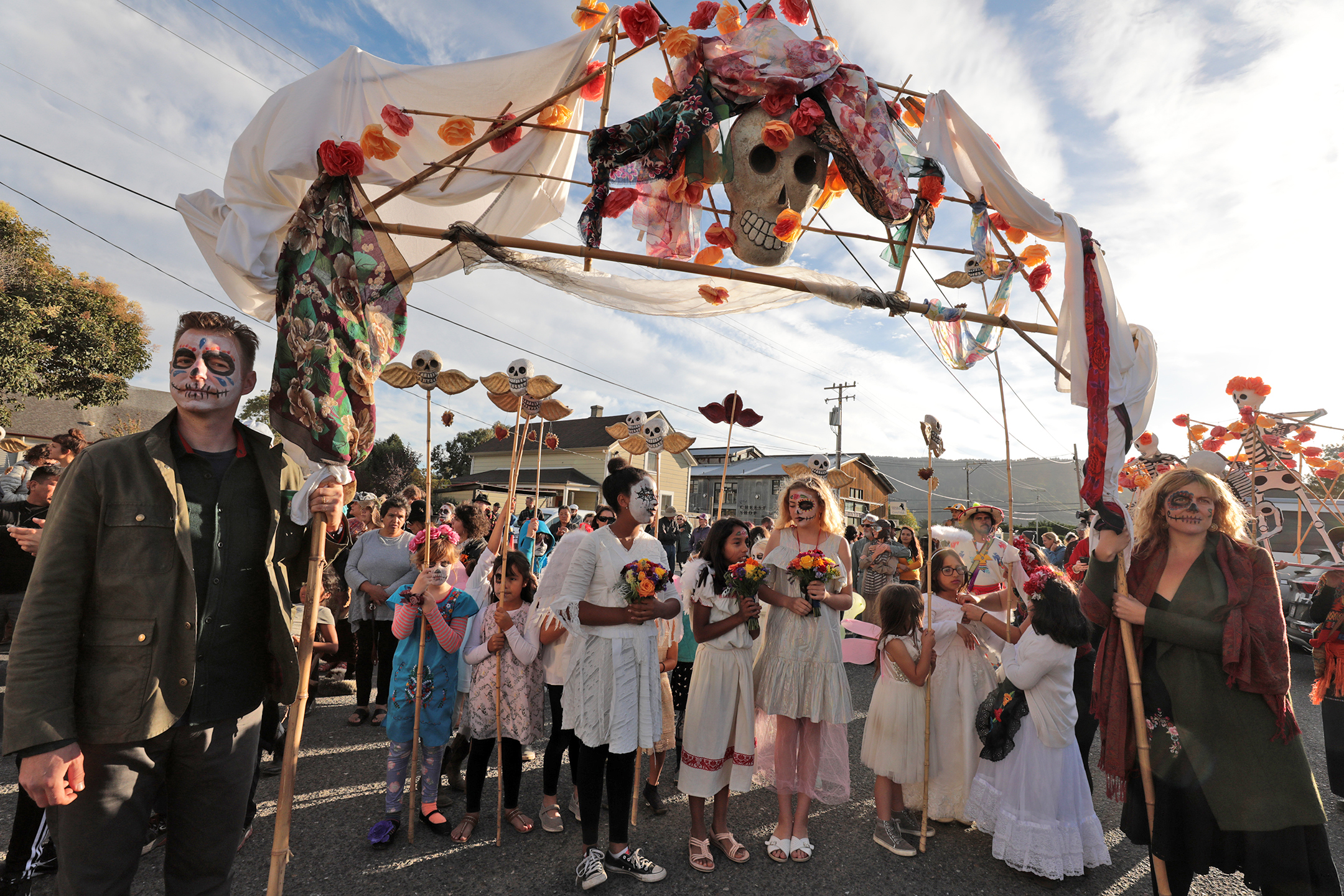 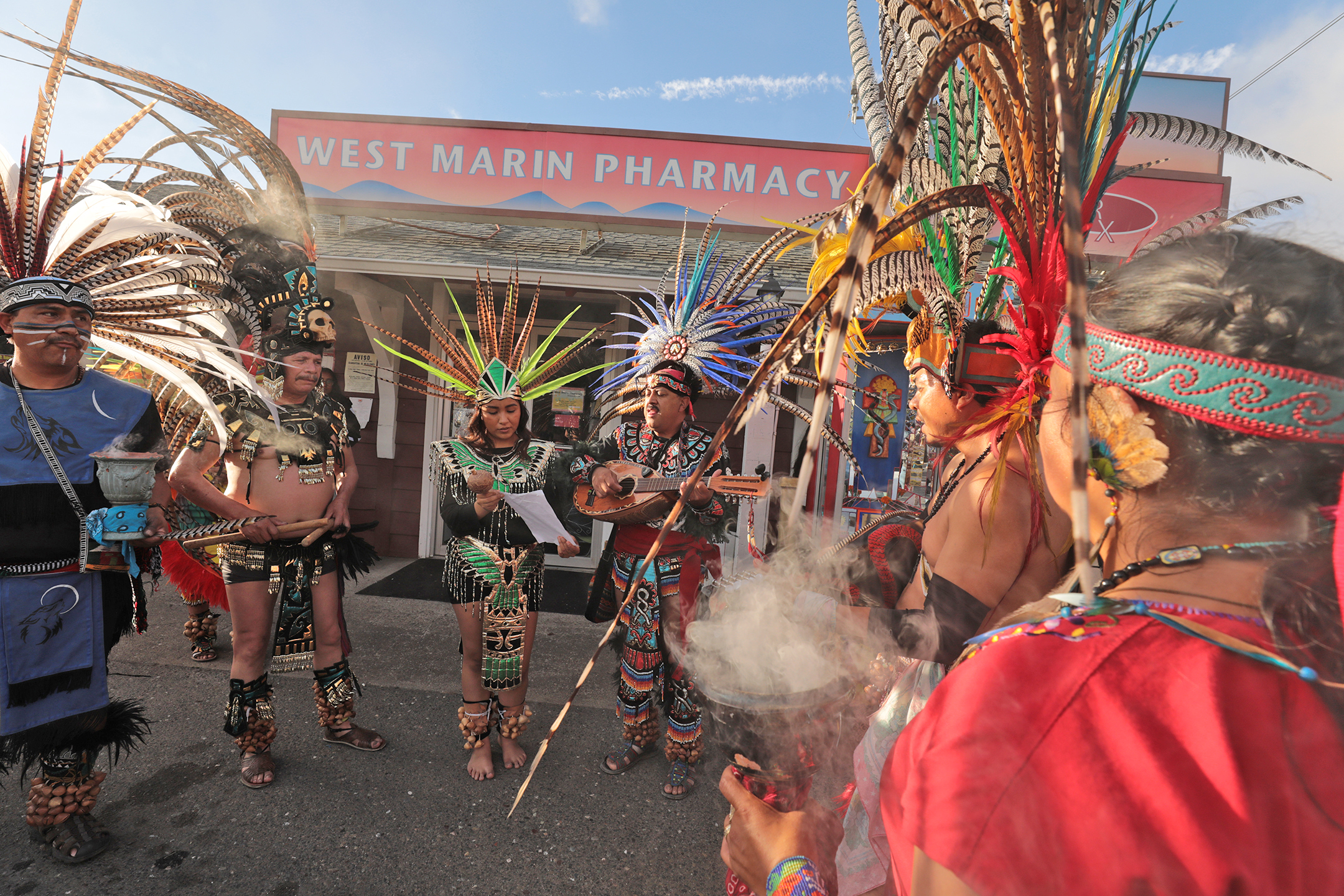 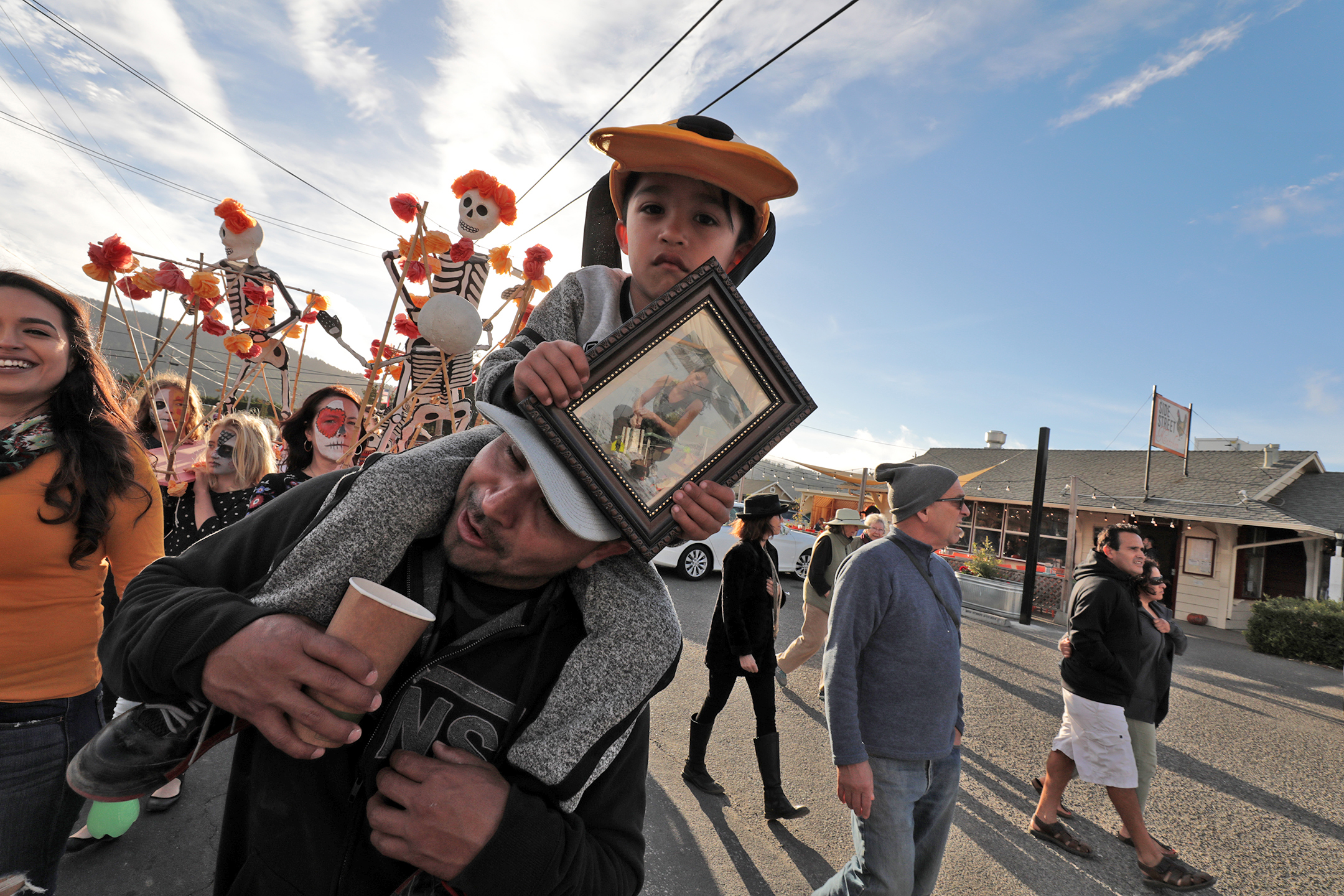 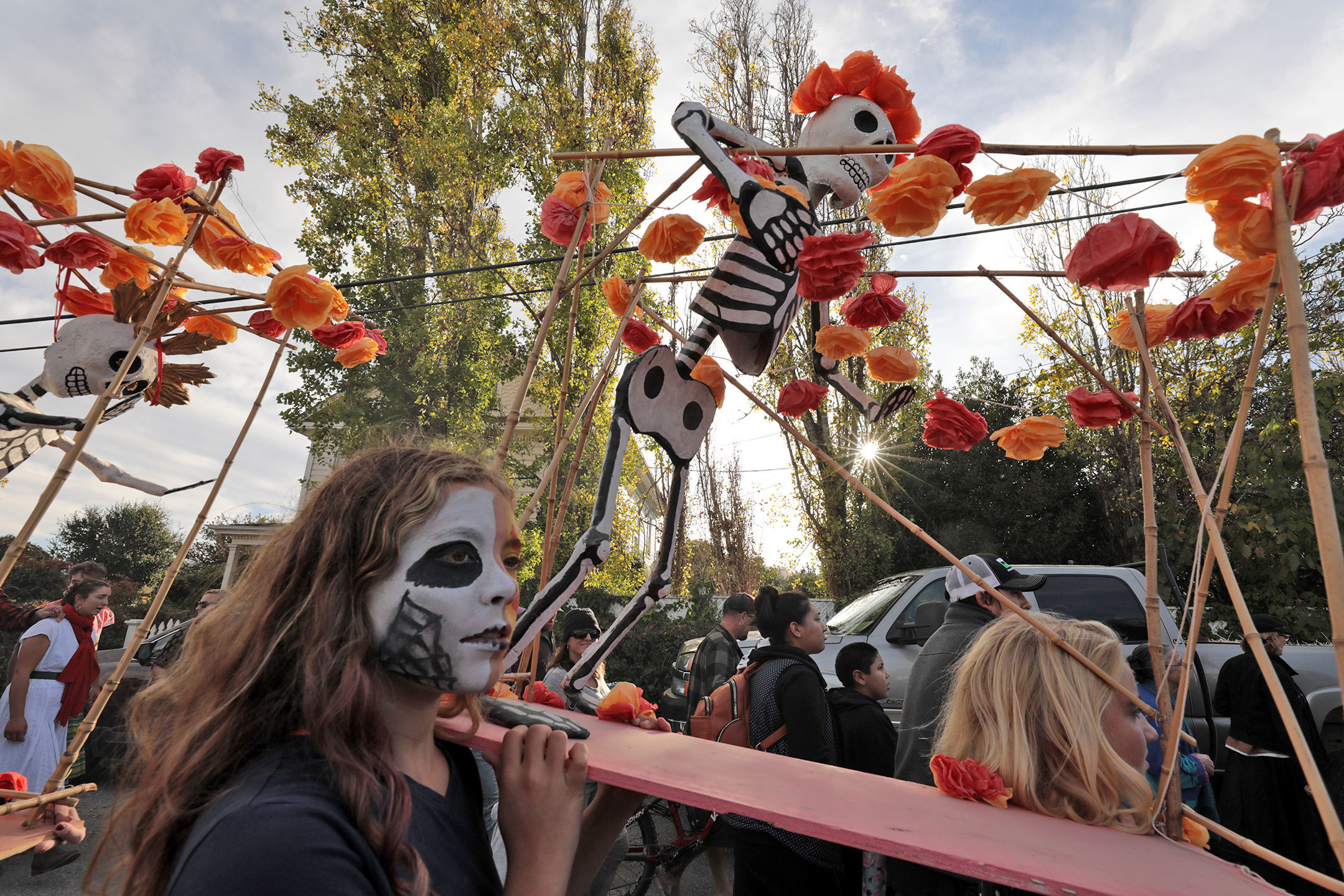 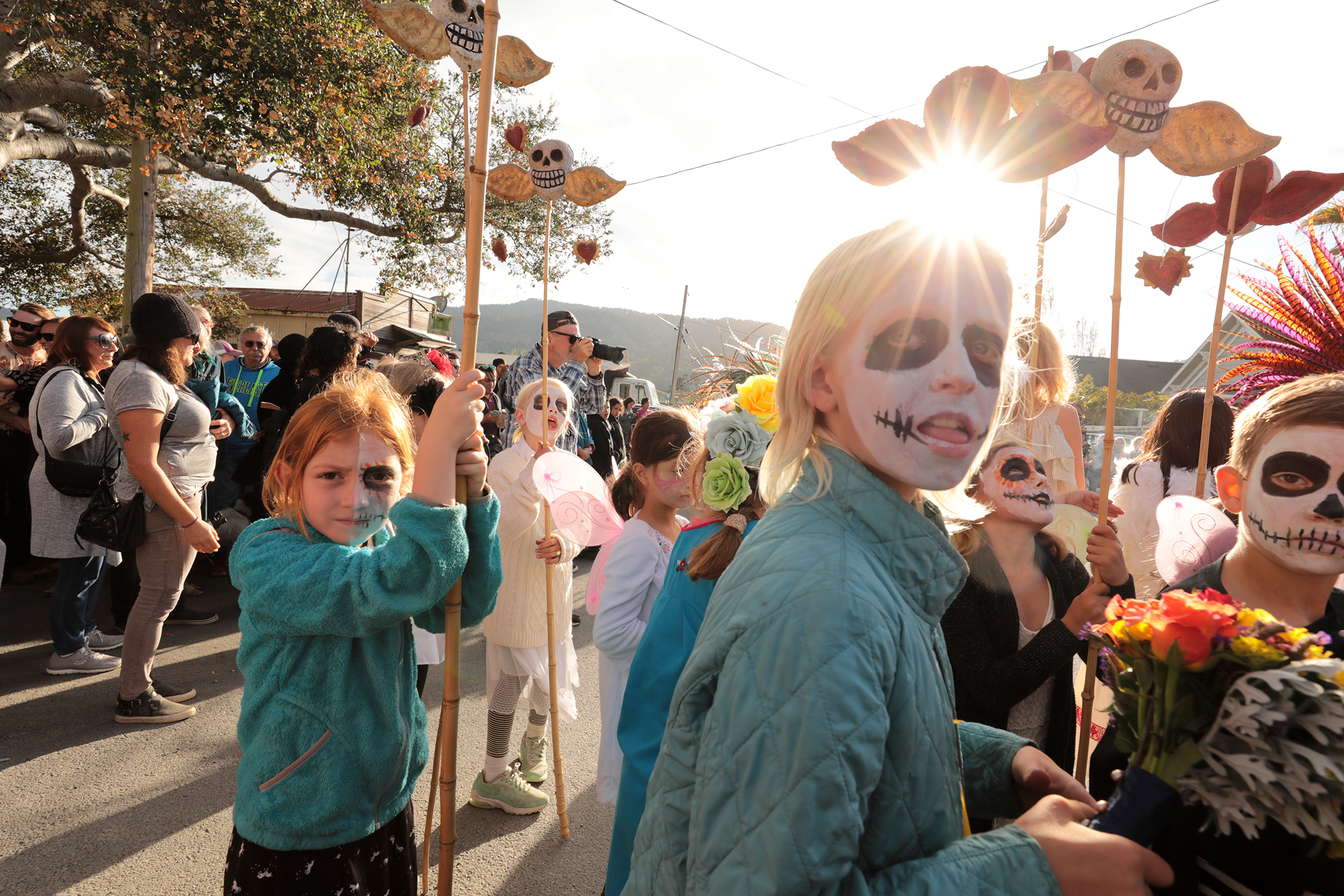 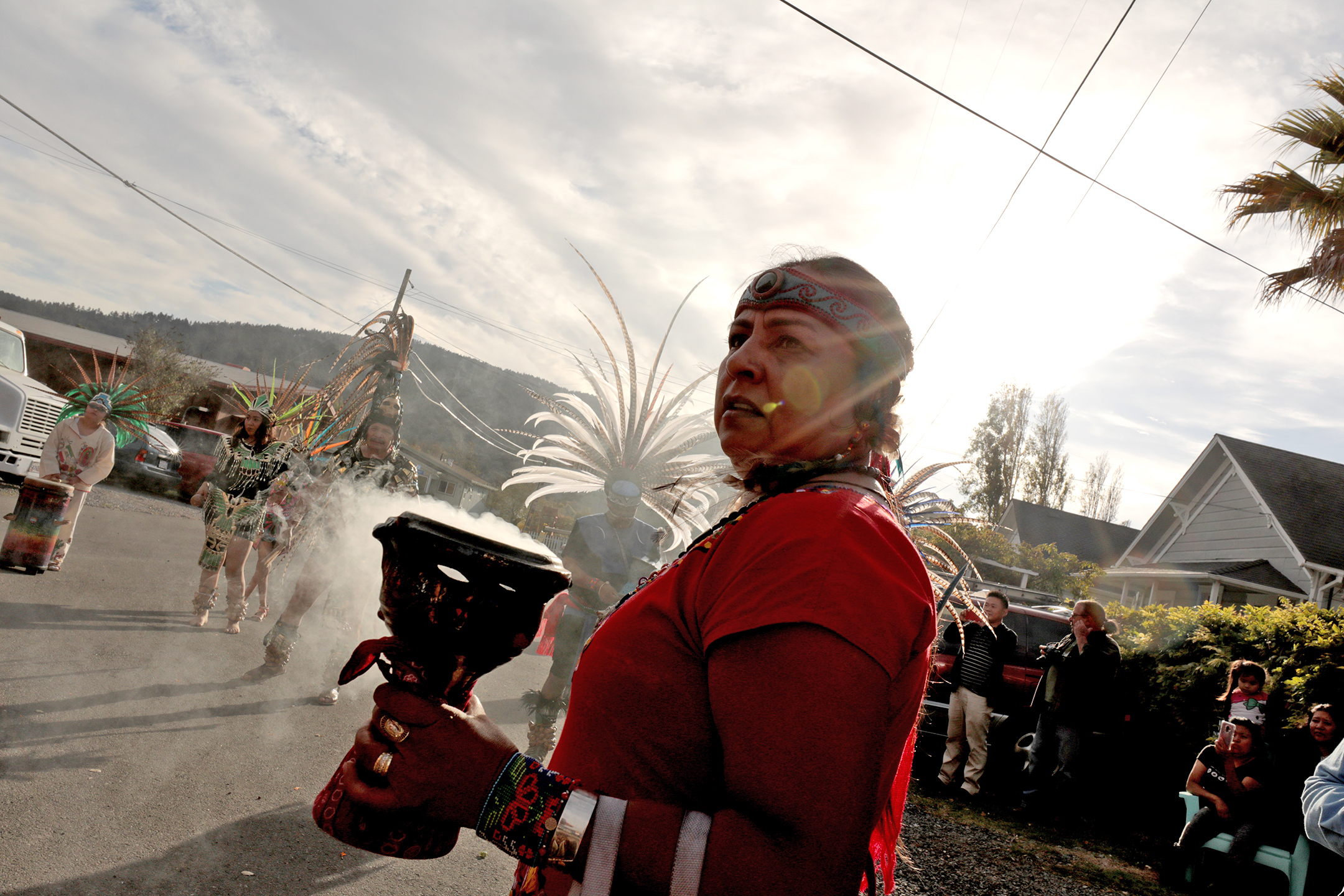 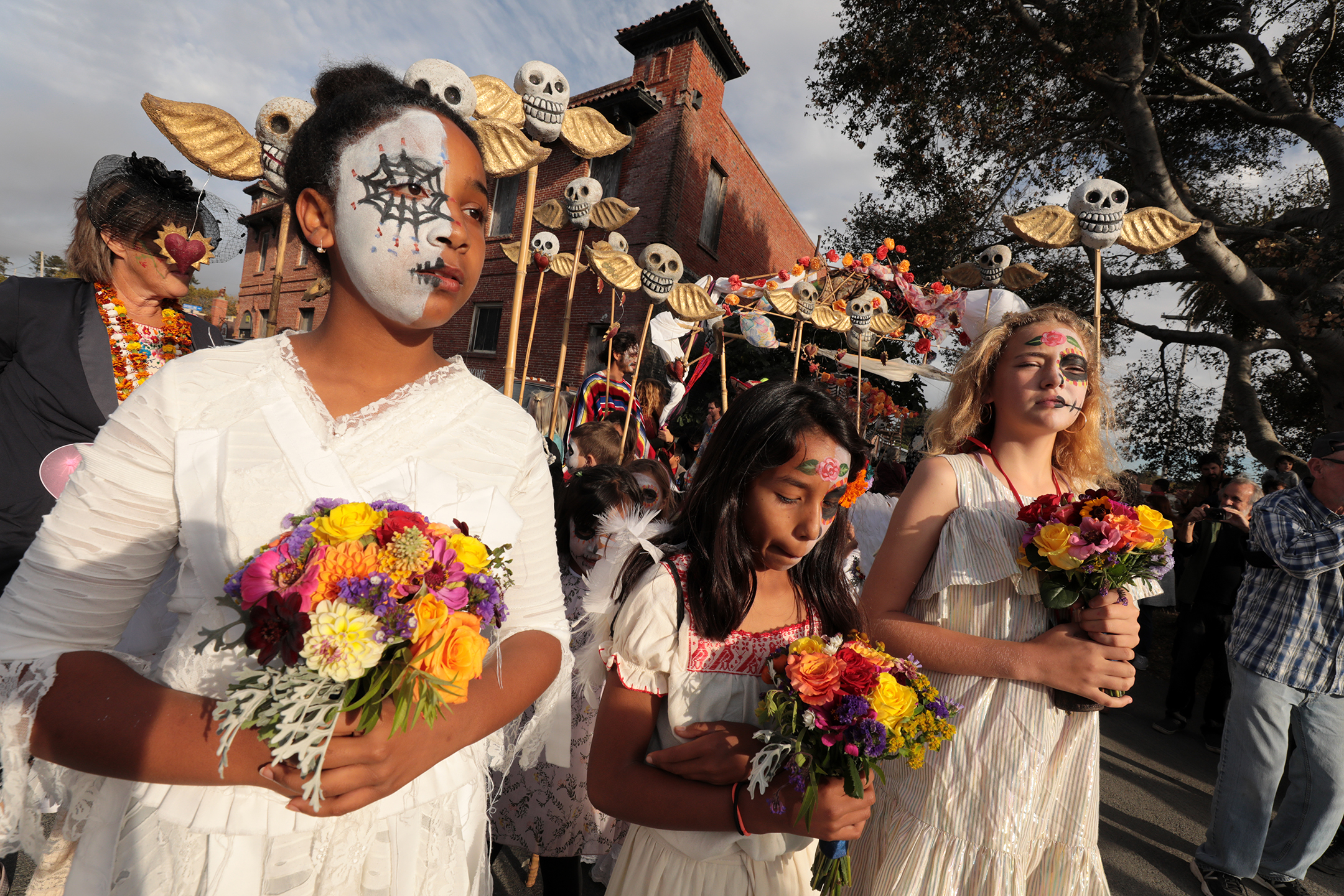 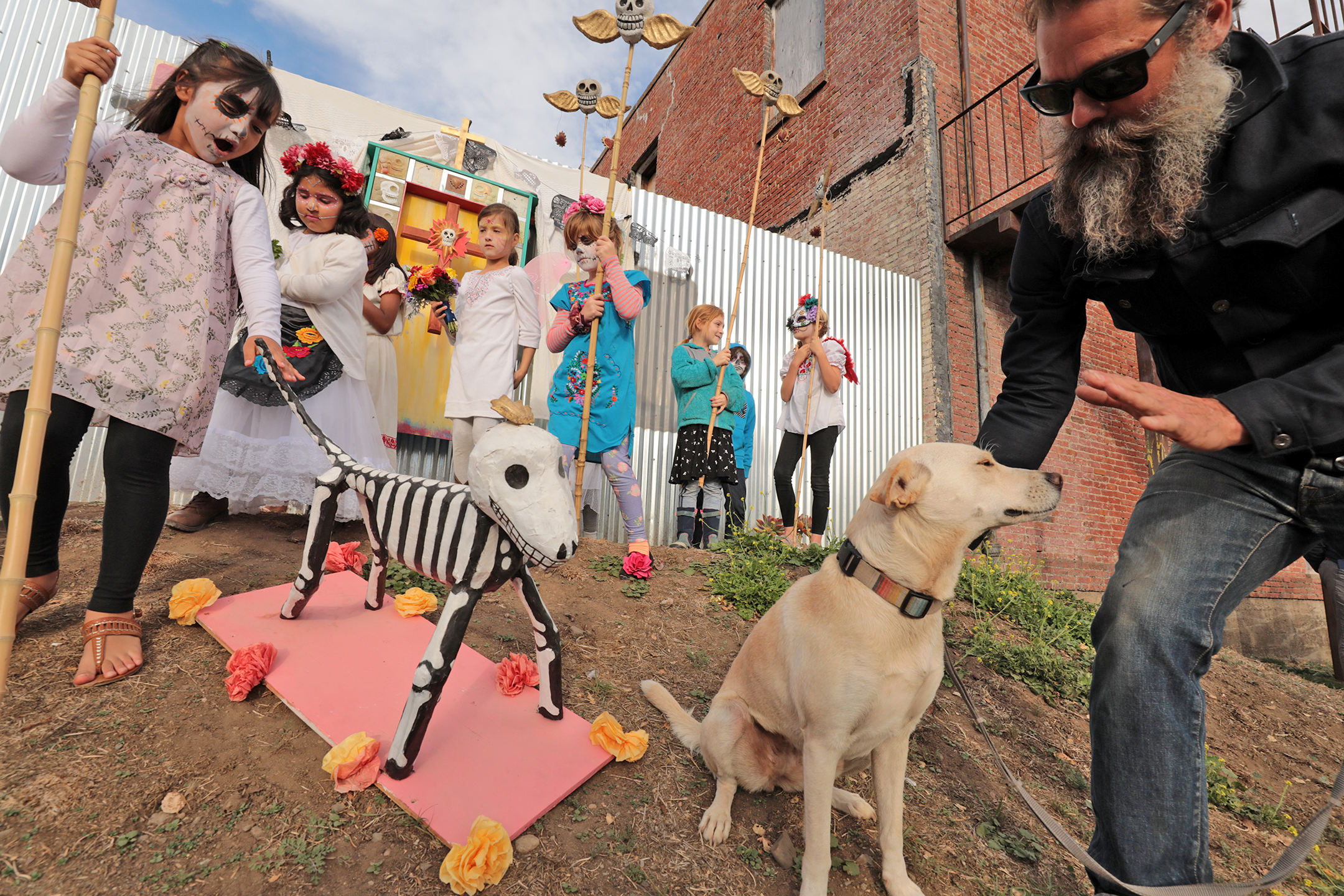 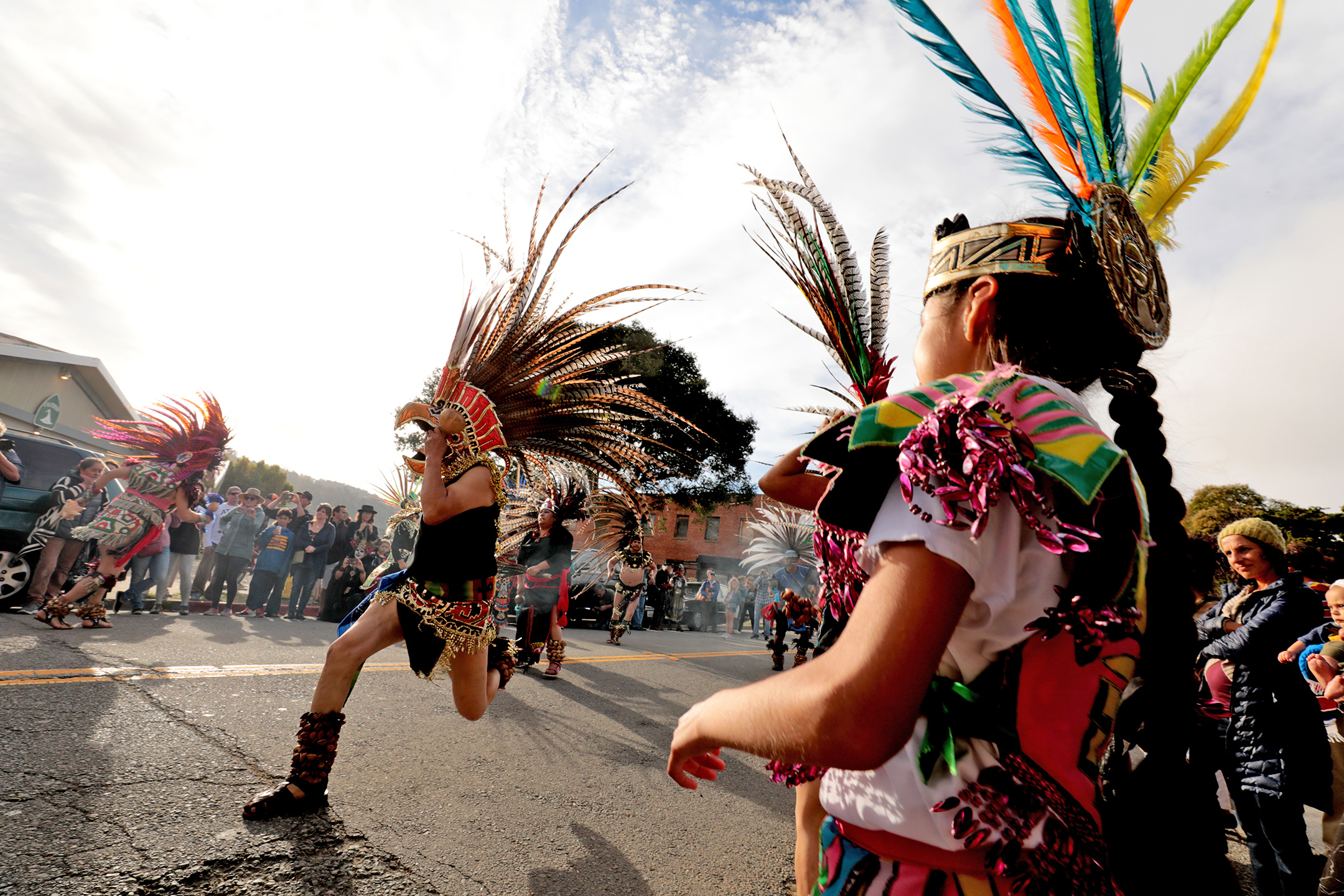 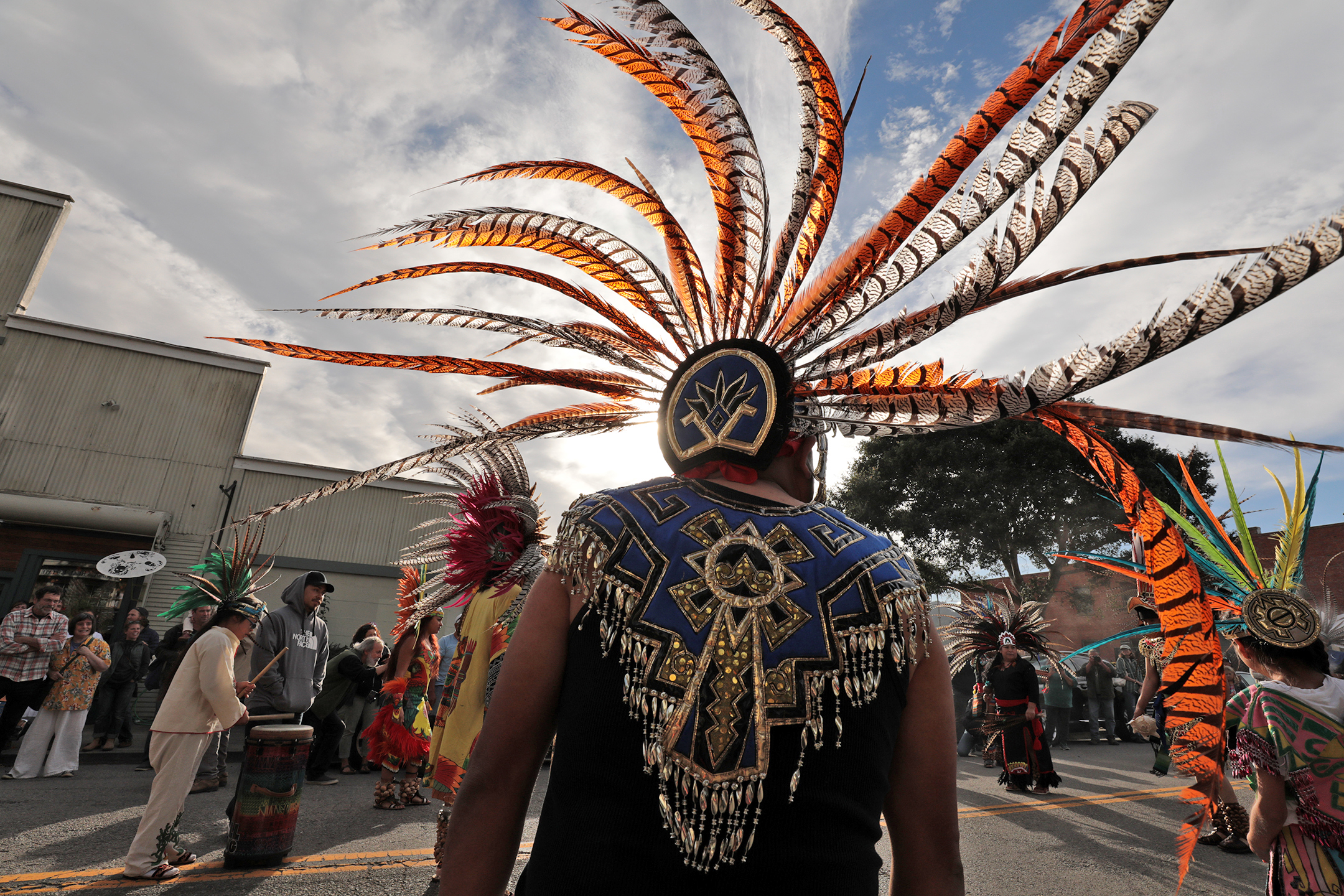 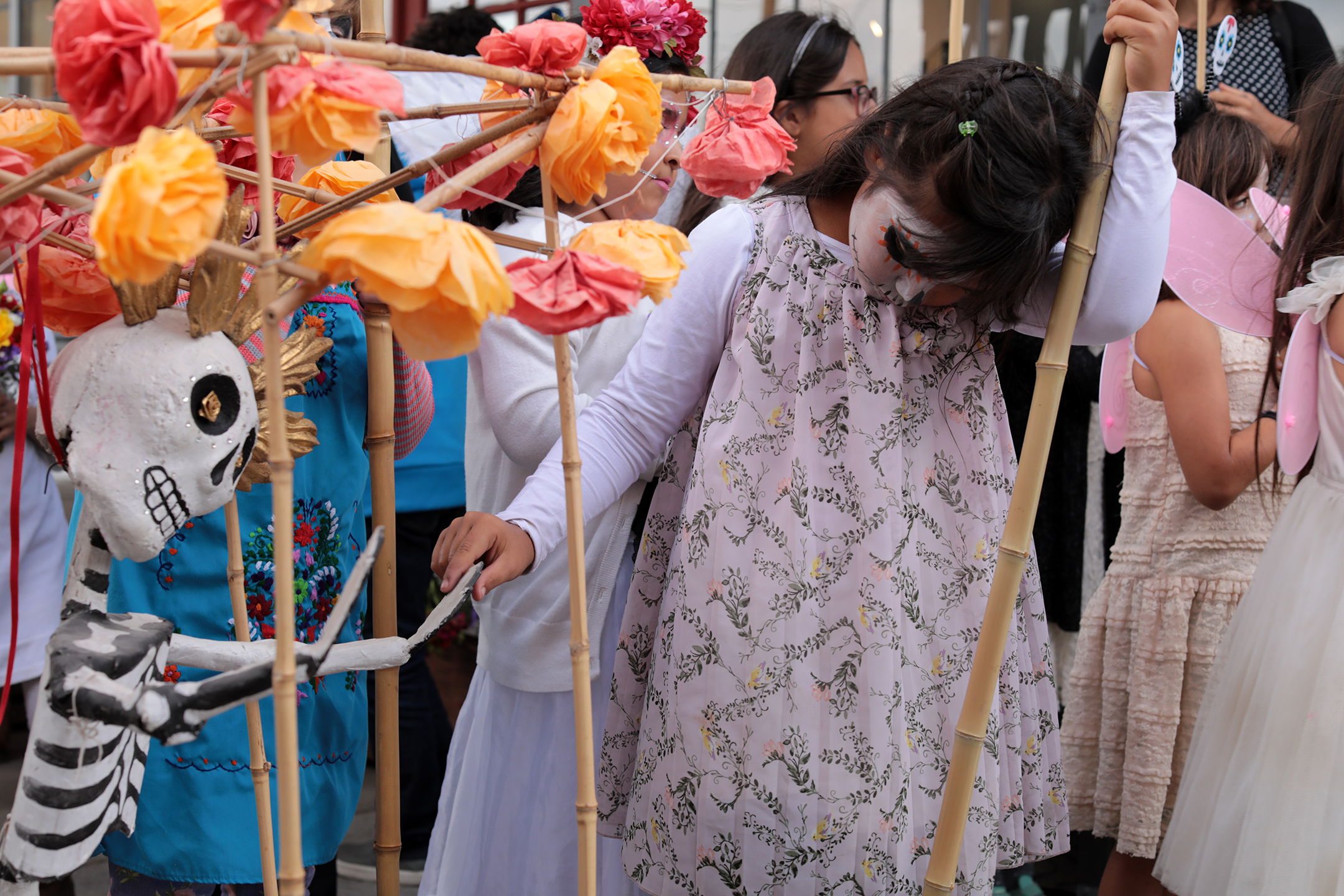 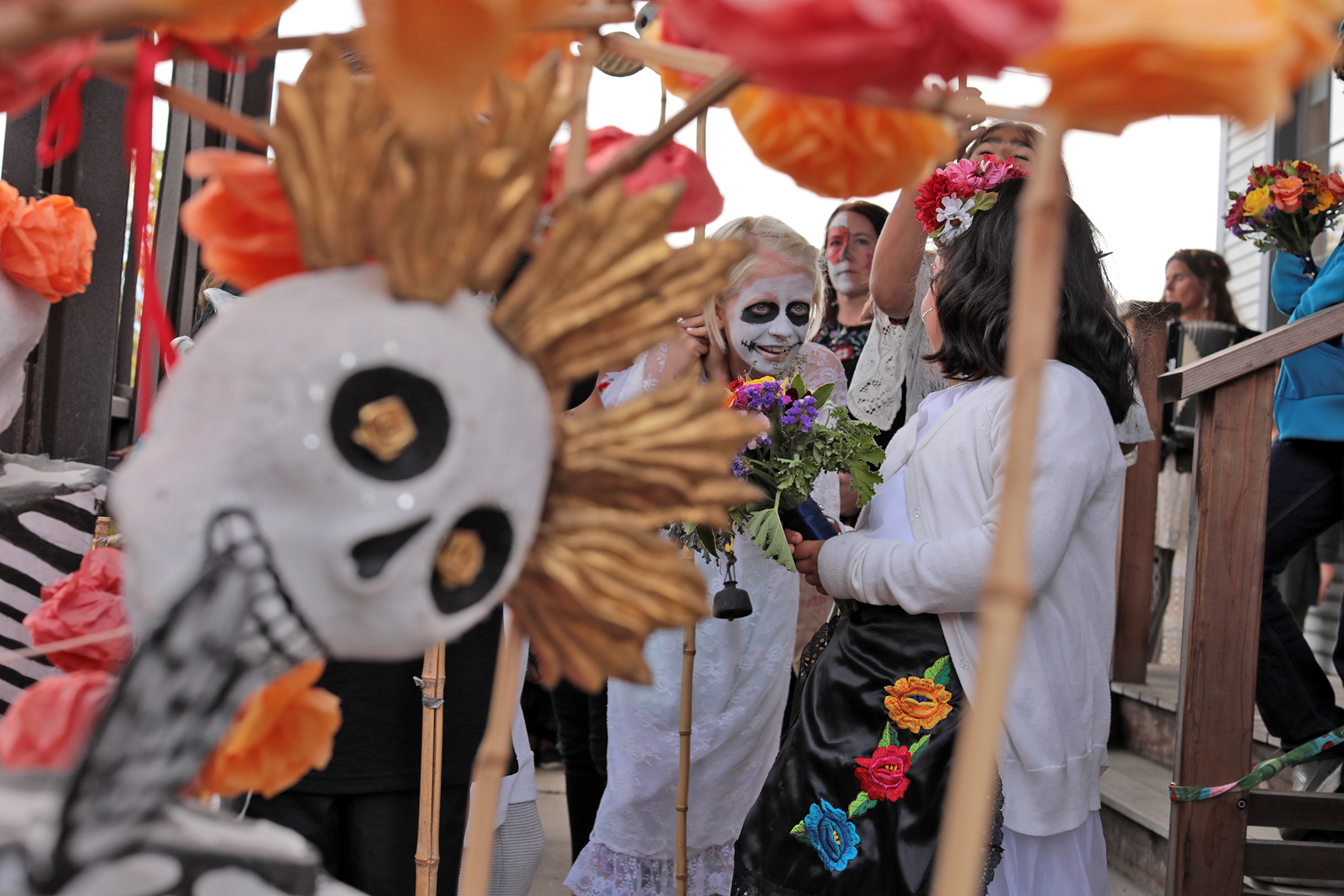 Micah Garen is an award-winning documentary filmmaker and journalist who has worked in conflict and post-conflict zones for the past fifteen years. Most recently, he has directed five feature-length films for Al Jazeera English, one of which won a Golden Nymph for Best News Documentary at the 2014 Monte Carlo Television Festival. His work has been published by Al Jazeera English, The New York Times, The New York Times Magazine, Vanity Fair, Newsweek and the Financial Times, among others. His recent short film about the refugee crisis, “Light on the Sea,” launched in March on VanityFair.com. His short film from Afghanistan, “Call Me Ehsaan,” was a New York Times Op-Doc editor’s choice and screened at festivals. Garen filmed the Christmas Eve Raid scene in Iraq that was part of Michael Moore’s Fahrenheit 911. In 2004, Garen and his interpreter, Amir, were kidnapped while filming in Nasiriyah. They were held for ten days before being released. Their story is chronicled in the dual memoir with Marie-Hélène Carleton, American Hostage, published by Simon & Schuster in 2005. The memoir received starred reviews on both Kirkus and Publisher’s Weekly. Garen’s work can be found at instagram.com/micahgaren and fourcornersmedia.net. (All photos © Micah Garen)

Marie-Hélène Carleton is an award-winning documentary filmmaker. Most recently, she has directed five documentaries for Al Jazeera English, one of which won Best News Documentary at the 2014 Monte Carlo Festival of Television and Film. Her recent short film about the refugee crisis, “Light on the Sea,” launched in March on VanityFair.com and The Scene. Her short film about the 2011 Egyptian uprisings in Tahrir Square, “Four Women, One Revolution,” won the Women and Girls Matter award for Media that Matters. Her film work has appeared on Al Jazeera English, Vanity Fair, BBC America, The New York Times, the Financial Times, HDNet’s World Report and Granta, among others. She is a member of Film Fatales and has been awarded artist fellowships at the MacDowell Colony and the Ucross Foundation. She was selected to participate in the inaugural Film Independent Documentary Lab in Los Angeles and the IFP Documentary Film Lab. Carleton’s work can be found at instagram.com/mhcarleton/ and fourcornersmedia.net.