M   y love affair with Venice began back in college. I spent a term “studying” in Florence and made frequent trips to wrap my head around the intractable beauty of the city that floats. A half-dozen visits later, I find myself making a bi-annual pilgrimage to Venice for preview week of the Biennale di Venezia. Founded in 1895, it is the grandfather of international art fairs. In the oversaturated, highly commercialized and frenetic world of contemporary art, the Venice Biennale maintains a certain dignity and sense of permanence. Thirty nations fill grand old pavilions in the Gardens that house six-month exhibitions of contemporary art every other year. In some ways, it’s the closest thing to the Olympics for visual art. Each competing nation puts forth what it believes to be the strongest and most compelling exhibit or artist they can find. The selection process is often by committee but varies from nation to nation and can be political. In addition, there is a central exhibit, curated this year by Okwui Enwezor, as well as dozens of collateral exhibits and collaborations.

For the casual visitor, the end result is somewhere around a hundred art exhibits occupying the Gardens, the Arsenal and sprinkled throughout the canals of Venice in repurposed palaces and churches. All of this in a city that hardly lacks for charm or adornment. 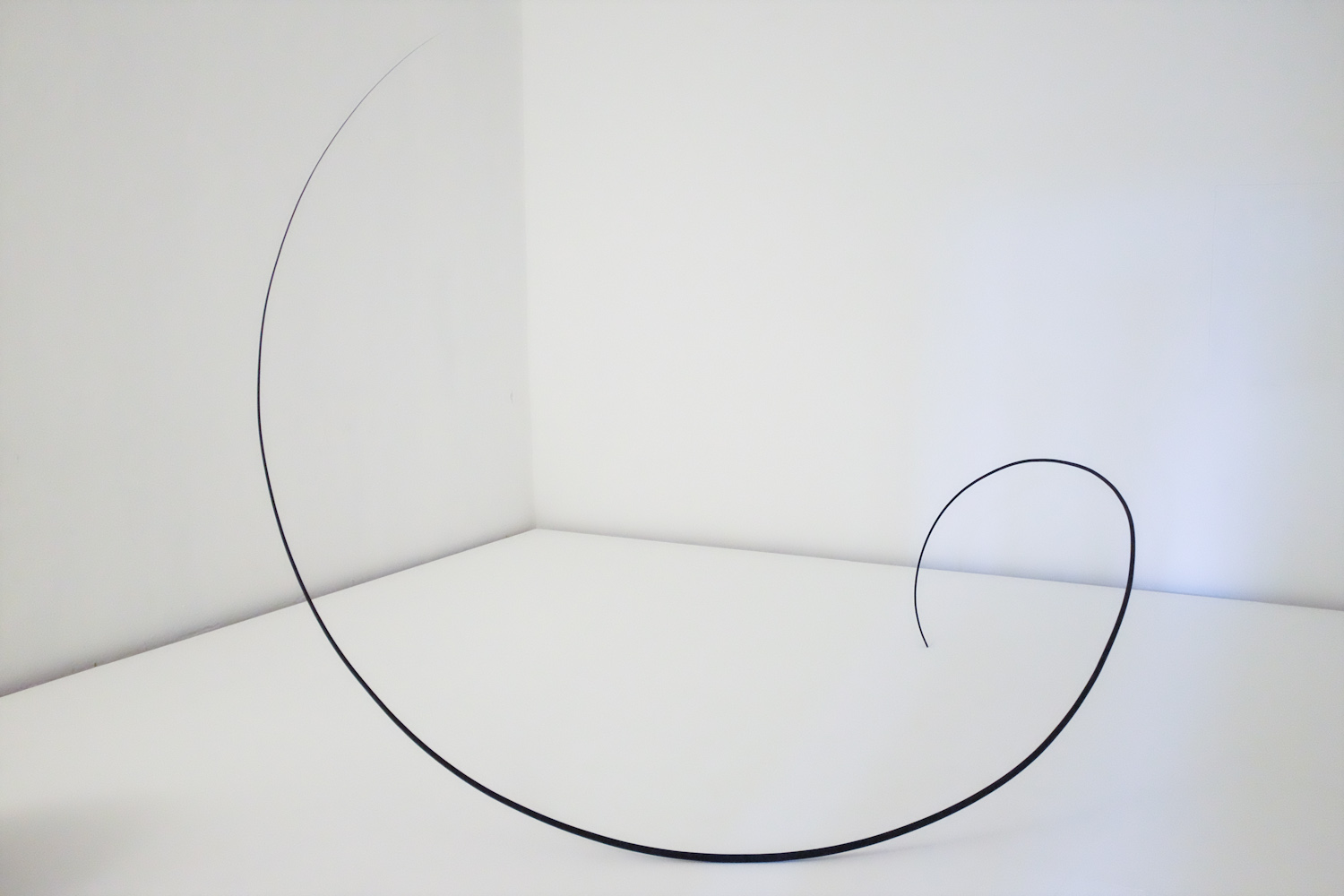 I spent much of my week documenting exhibits and installations for The New York Times, but the interstices and evenings were all mine. It would be impossible for one person to experience all of the installations, receptions, cocktail parties, performances and dinners happening simultaneously around the one hundred eighteen islets that make up Venice, so what follows is a window-peek into what transpires during the city’s most culturally-charged week. 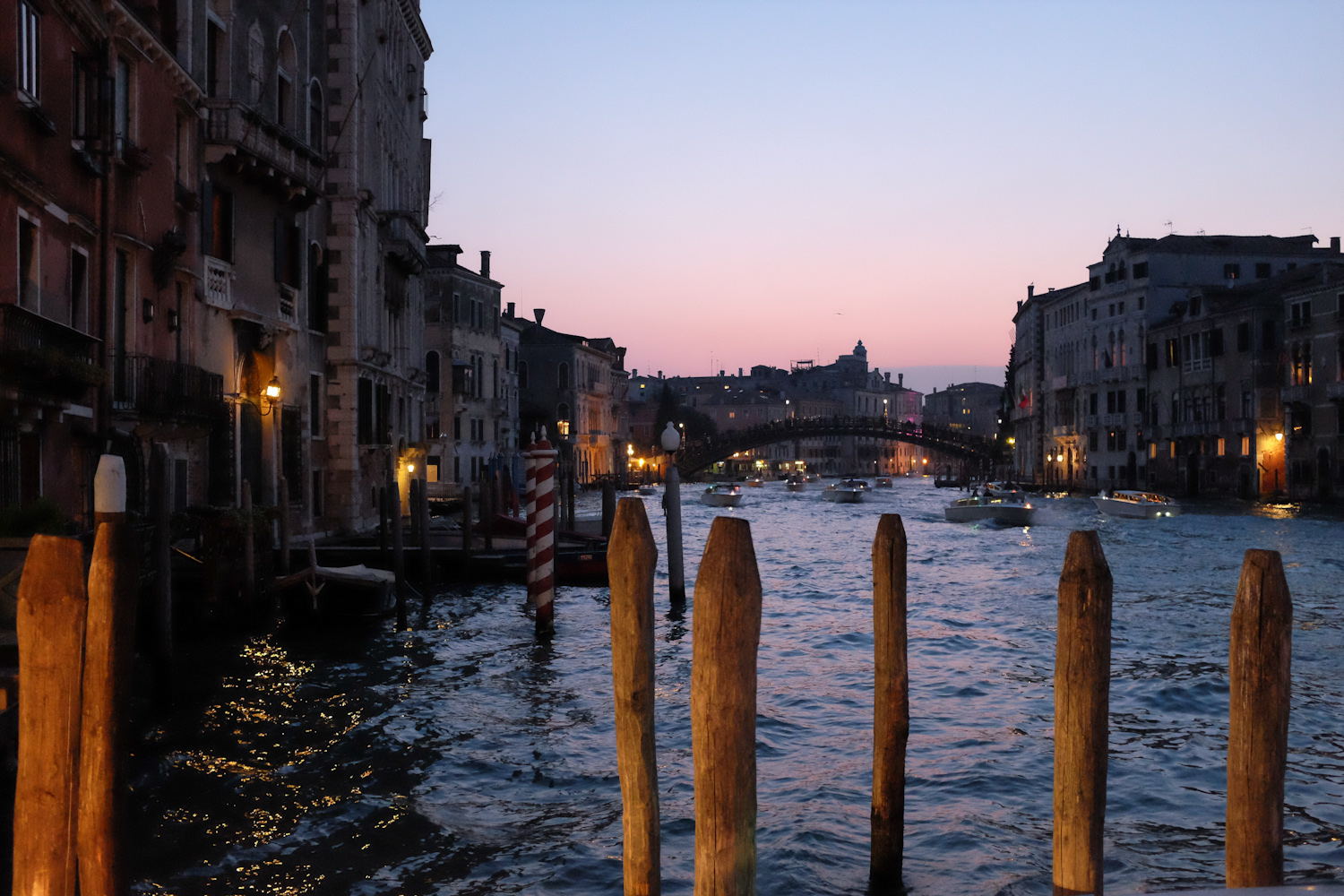 I arrived around eight p.m., as day gracefully transitioned into night on the Venetian Lagoon. 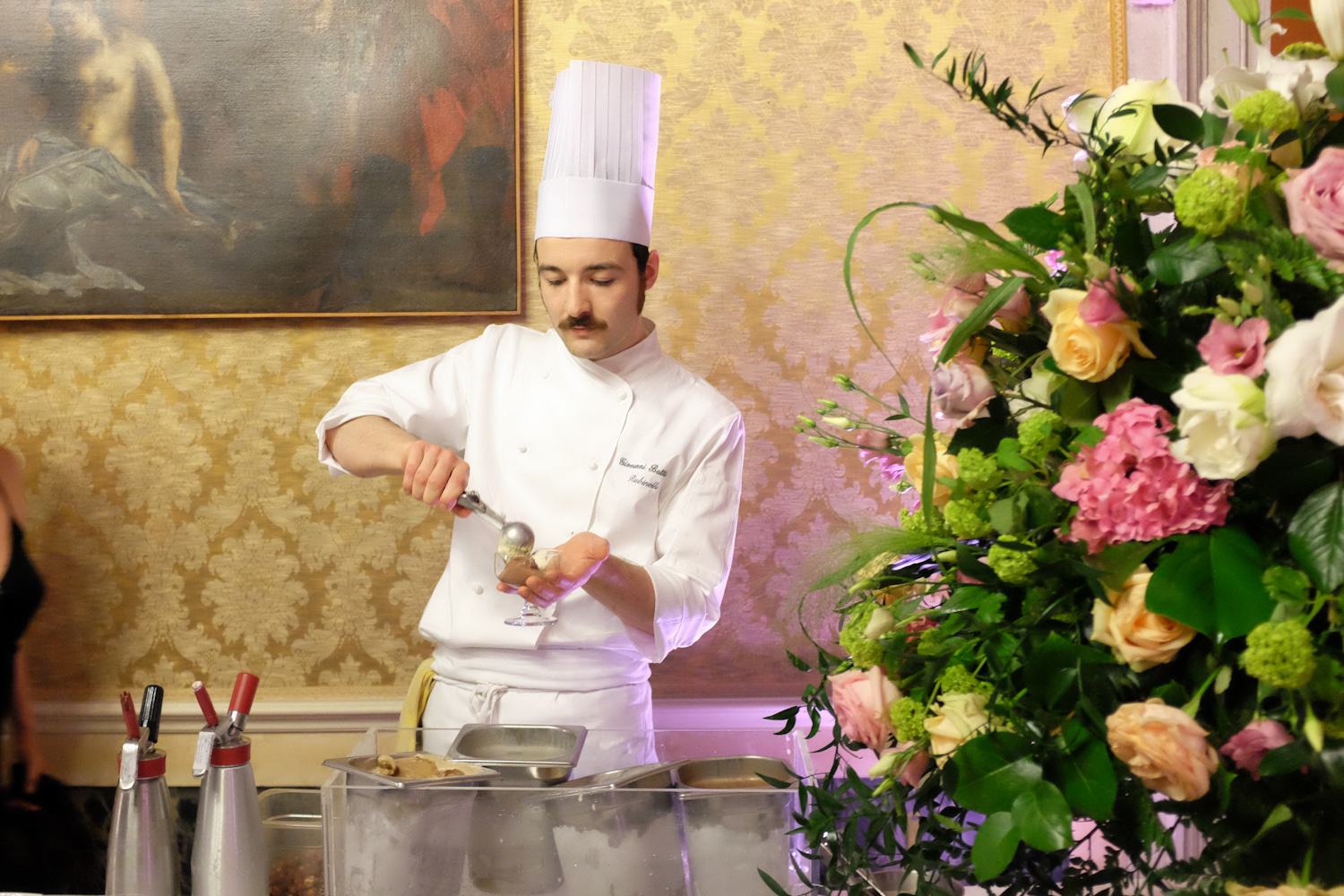 I quickly dropped my bags, put on a jacket and went to a party in a palazzo, thrown by Hauser & Wirth, the Zurich/London/NYC-based contemporary art powerhouse. An Italian band butchered numerous English covers—in the best way possible. The gelato served up by the fellow above was a welcome distraction. 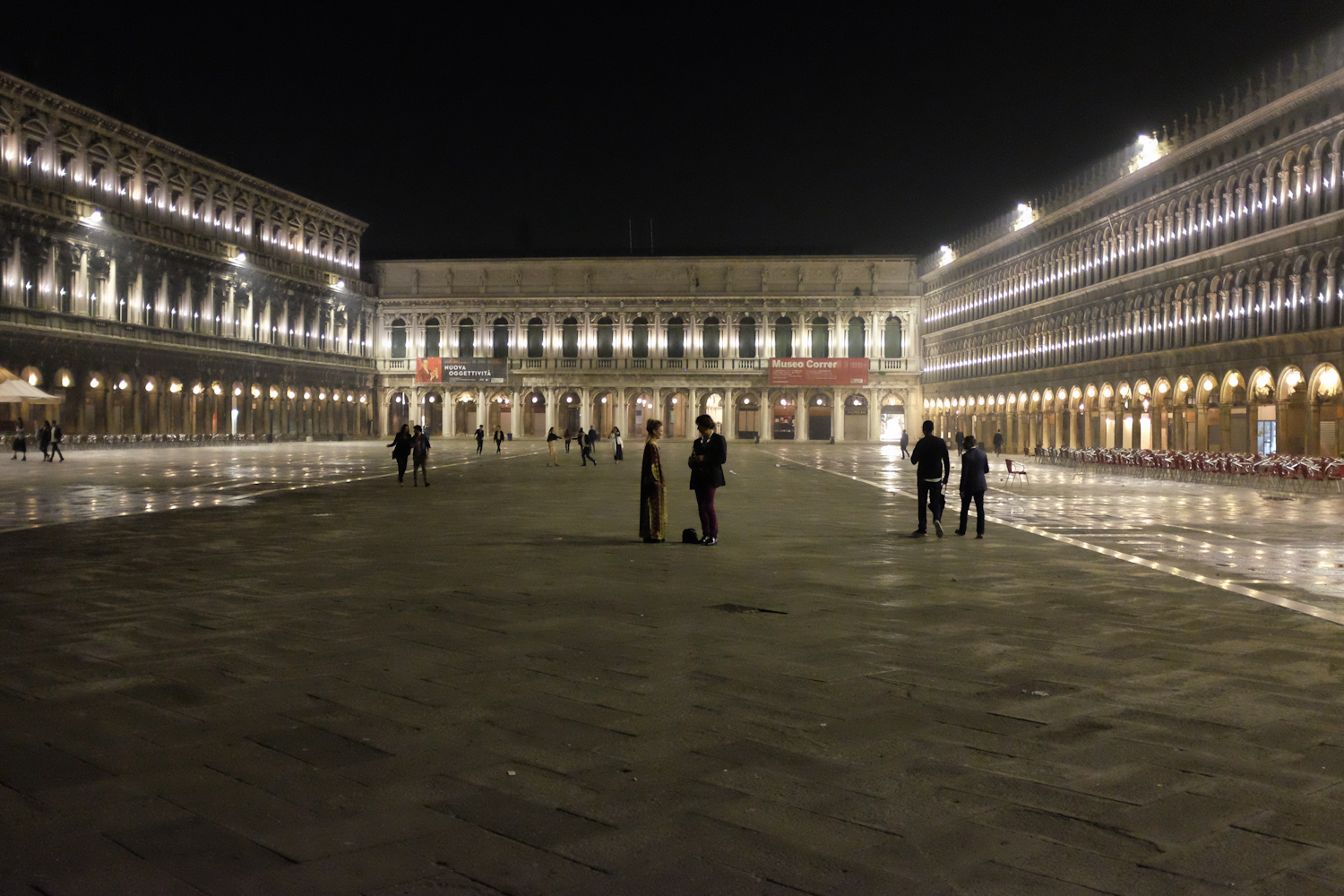 Walking home that night was not easy. It never is. Venice is by far one of the easiest and most pleasant places on earth to get lost. 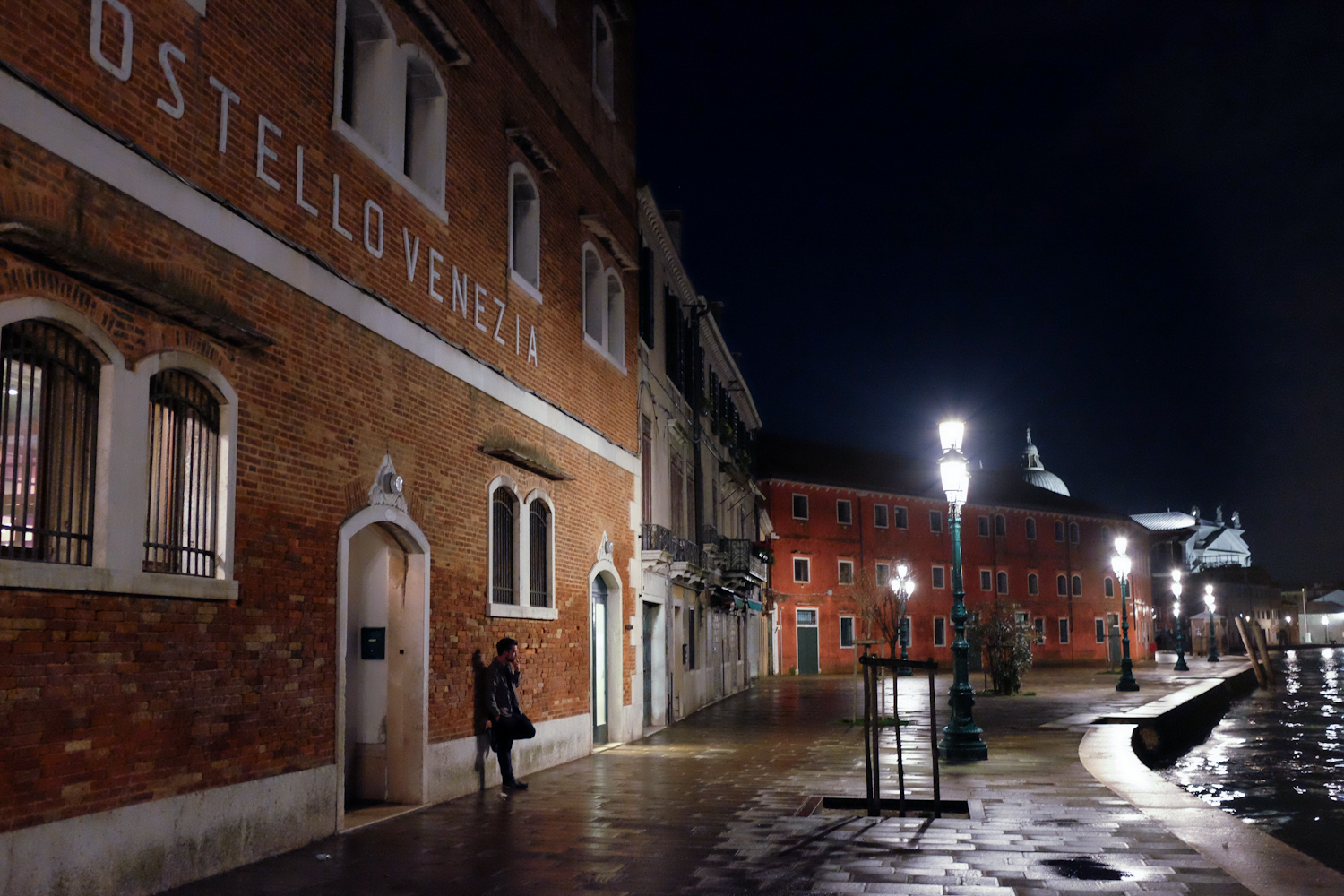 Most of my favorite memories of Venice took place late at night. The narrow streets and canals clear out, and I’m left to my thoughts and a city that fairly sparkles in the moonlight. A gentle silence rolls in like fog—broken only by the clicking of bootheels over a stone bridge or a chance encounter with a fisherman carrying inky cuttlefish and silvery sardines.

Finding a reasonably-priced place to stay is a challenge. Two years ago, I found a generous chunk of an old palazzo via AirBnb. This year I had to settle for a bunk at Generator, a remarkably stylish hostel on the slightly removed island of Giudecca. Being the only affordable option in town, it was almost entirely full of artists, journalists and other low-rollers. Including Ari, my best friend in Tel Aviv, who happened to be sleeping in the bed next to mine. 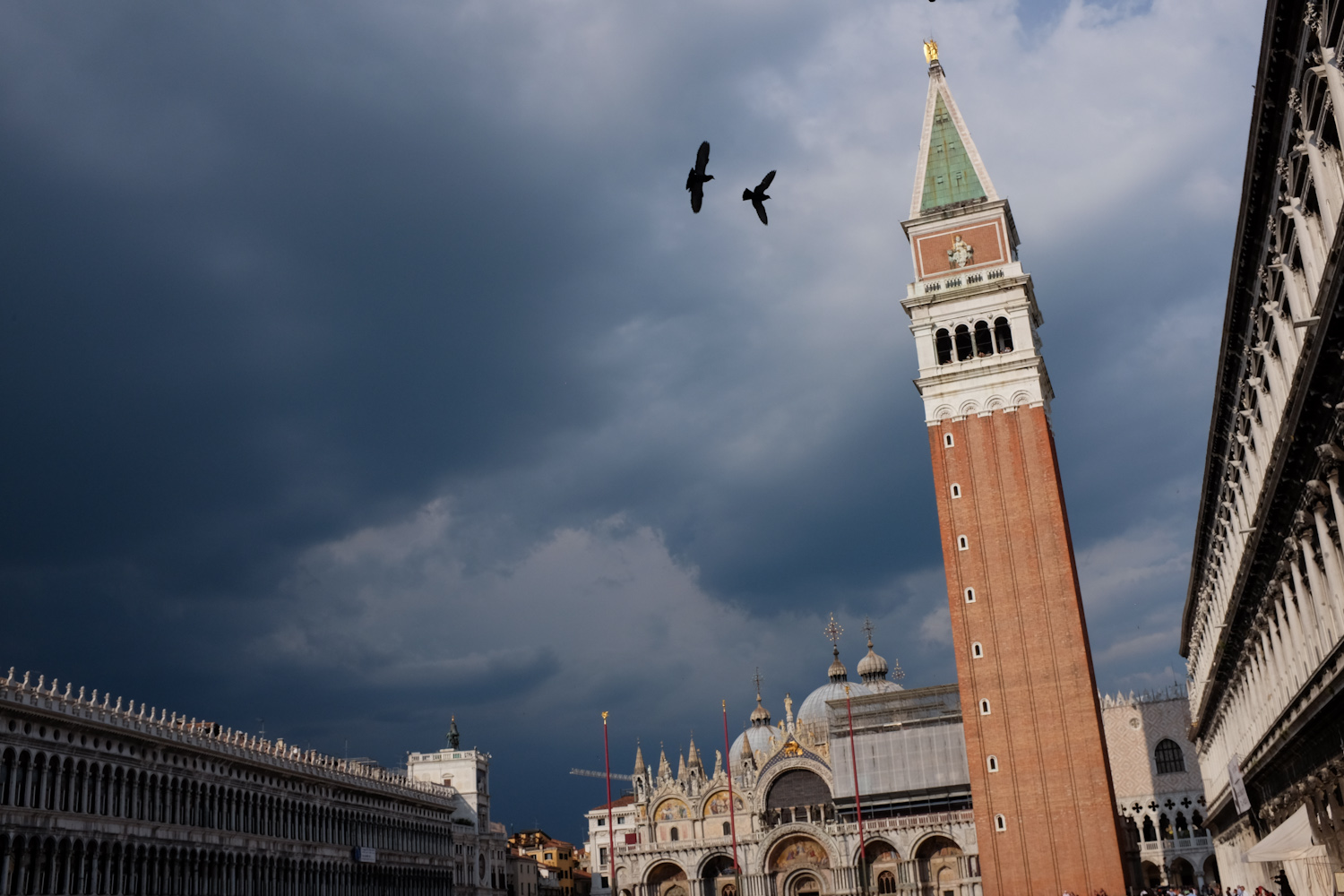 For many visitors, the Piazza San Marco is the where Venice begins and ends. It is undoubtedly one of the finest civic spaces in the world. Were it not inhabited by throngs of tourists and pigeons it might actually be a nice place to spend some time. 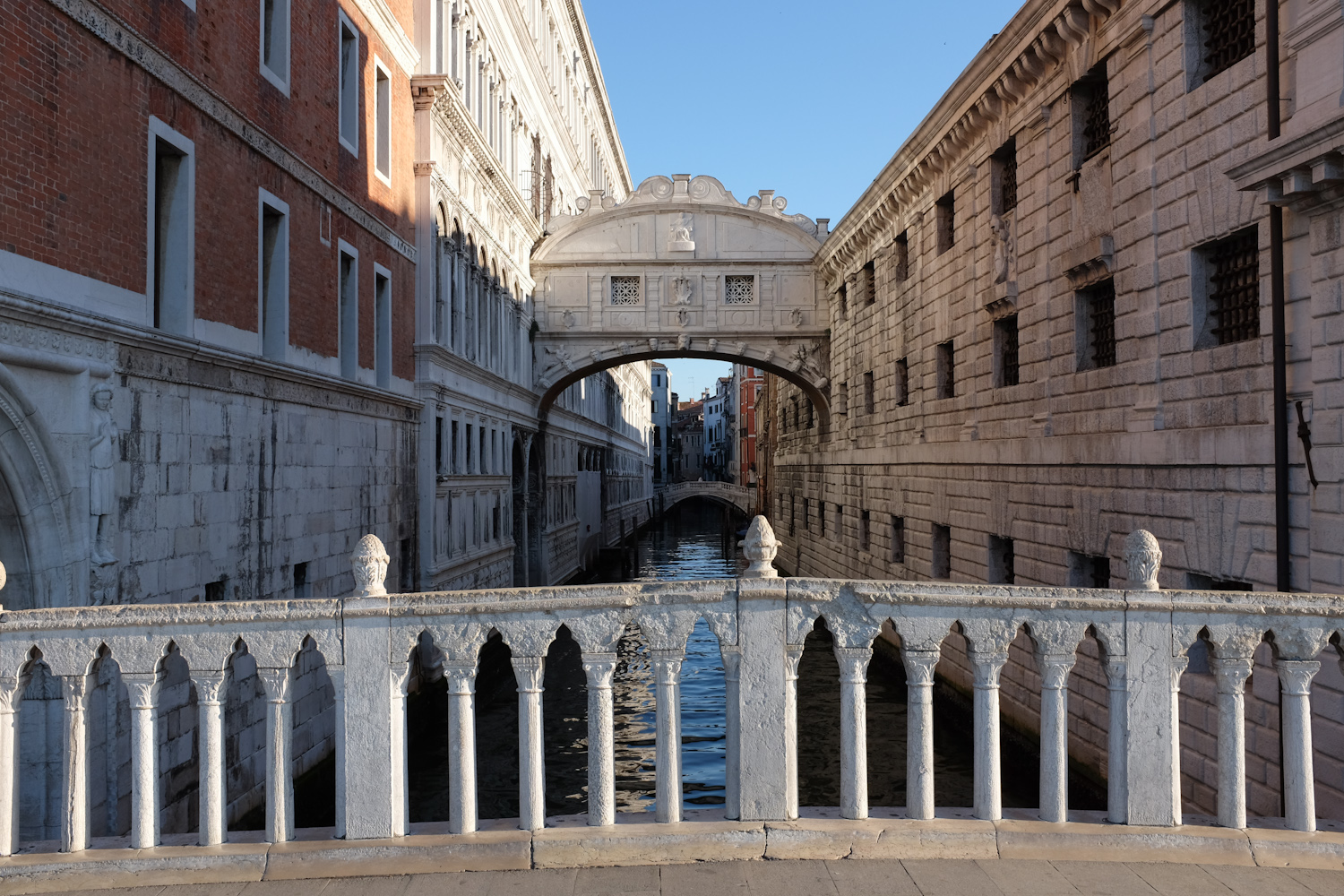 The time to enjoy the square, St. Mark’s Basilica, the Doge’s Palace, clock tower, arcades and nearby Bridge of Sighs is very early in the morning before the beast has awoken, or late at night. The quiet neighborhoods leave the strongest impression on me, though. Like the side streets behind the Arsenale and around Via Giuseppe Garibaldi. 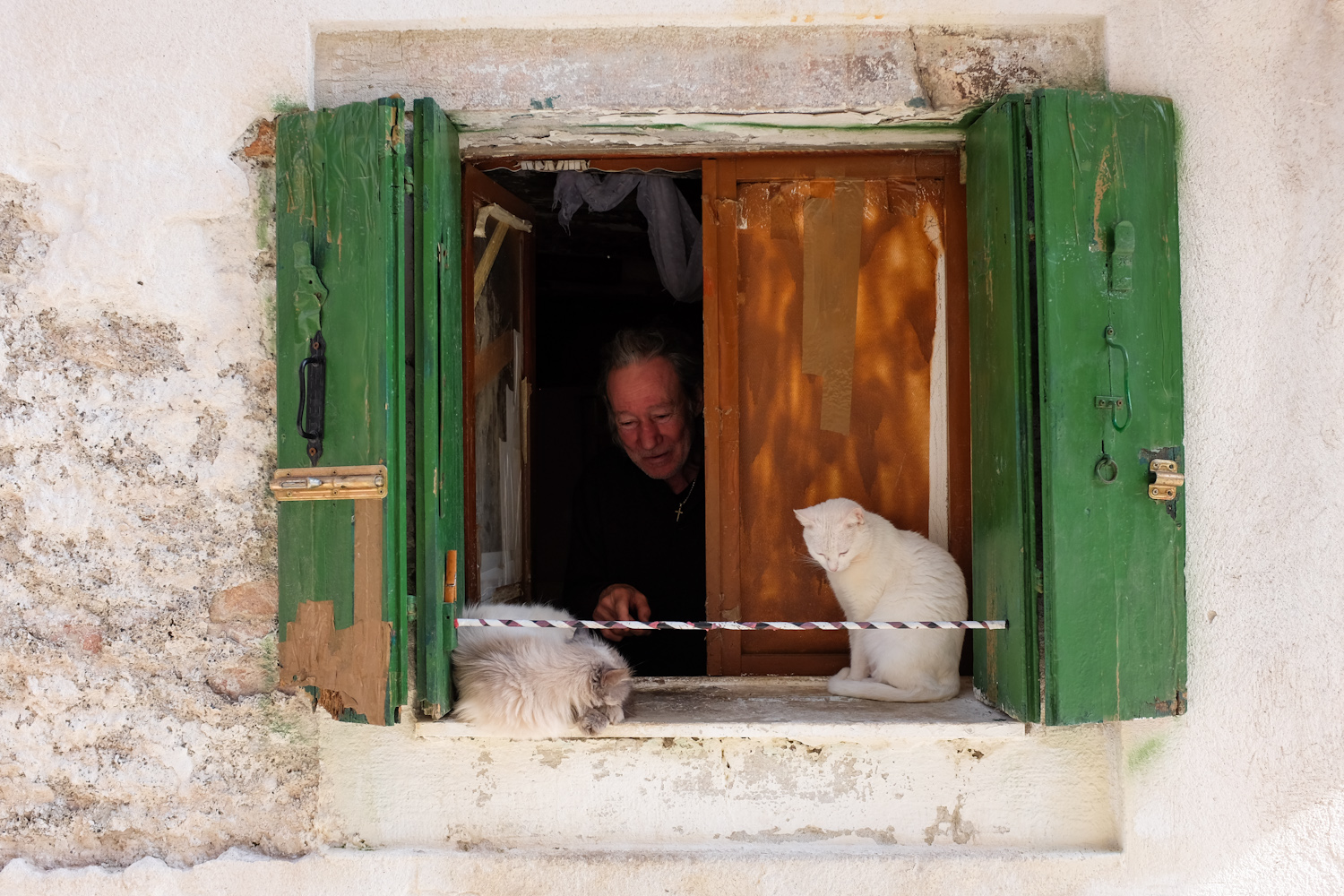 But it was the art we came for, right?

The bulk of national pavilions reside in the Giardini, which can be found on the easternmost tip of Venice. Two signs that you have arrived: mega-mega yachts moored in front and the noseless bust of composer Richard Wagner.

Herman de Vries, representing the Netherlands, showed one of the more holistic presentations this year. Sarah Lucas’ provocative and humorous exhibition for the UK was aptly titled “I SCREAM DADDIO.”

The Brazilian pavilion challenged elderly folks to contemplate holes in the walls.

A computer game-like video by Hito Steyerl took the cake at the German pavilion. In the Chinese pavilion, I came across a strange musical performance in a wading pool, featuring an authoritarian and unreasonable man with a megaphone telling the ensemble that “they’re doing it wrong” the whole time. The highlight of the Australian pavilion for me was a galaxy made out of safety reflectors.

Chiharu Shiota’s “The Key in the Hand” project for the Japanese pavilion was perhaps the most well-executed show I saw. Dahn Vo’s “mothertongue” exhibit brought a spare and poetic presentation to the Danish pavilion. 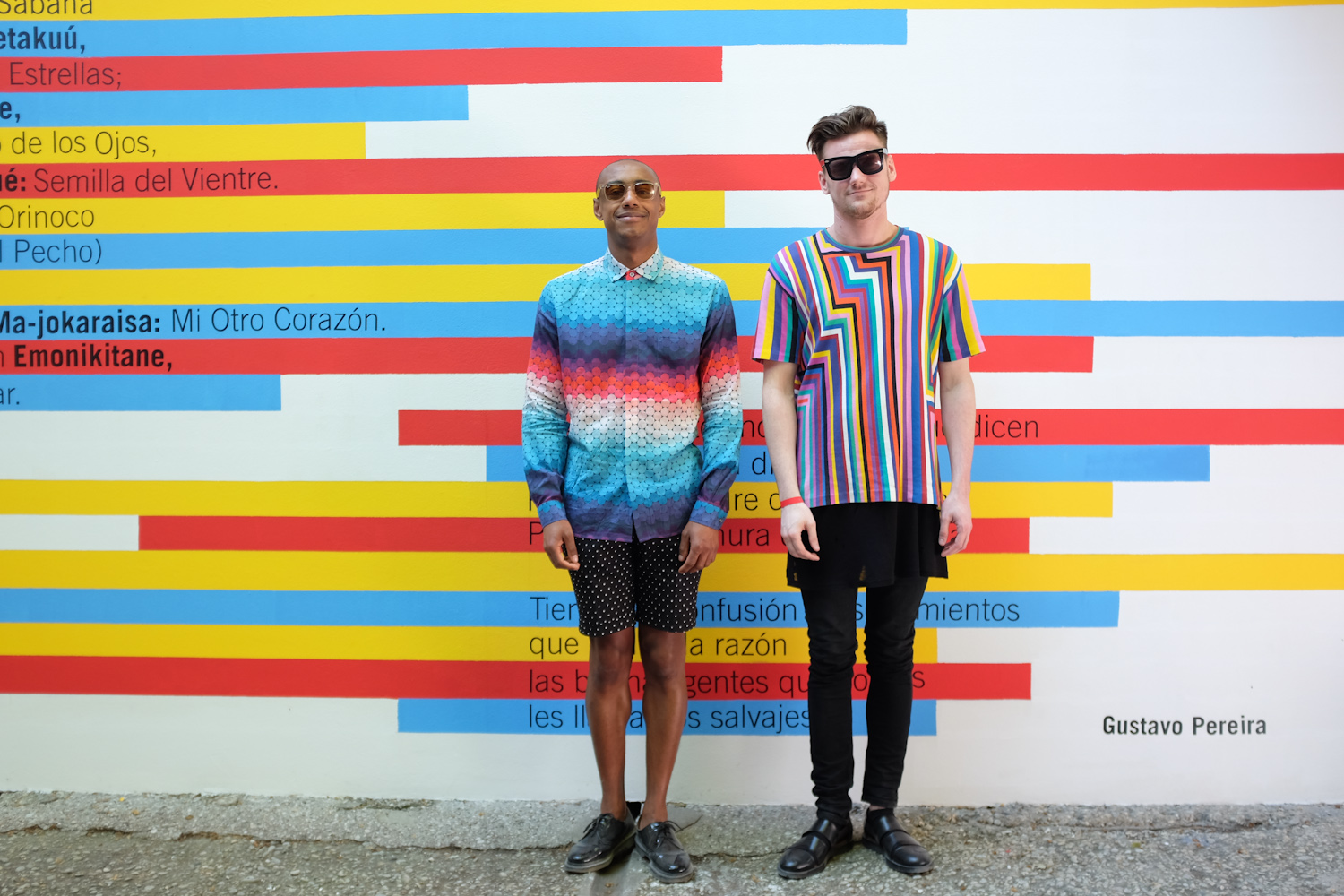 Venice in general, and the Biennale specifically, are both very Instagrammable… 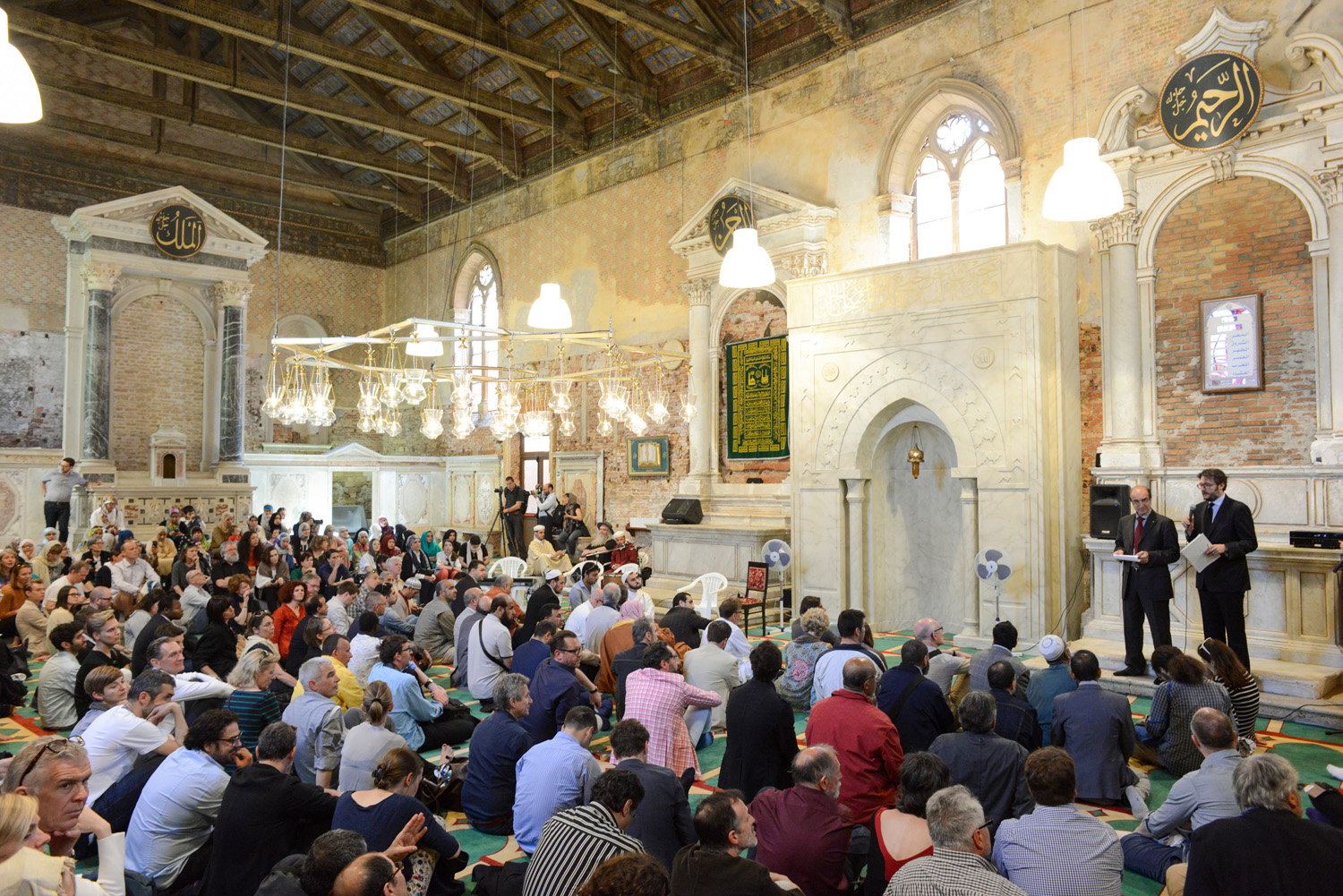 It felt as though there was a time bomb ticking in Iceland’s pavilion. Artist Christoph Büchel converted  a Catholic church into a fully-functioning Islamic mosque—the first ever in Venice proper.

The experiment proved too provocative for the authorities and the mosque was shut down within a few weeks. 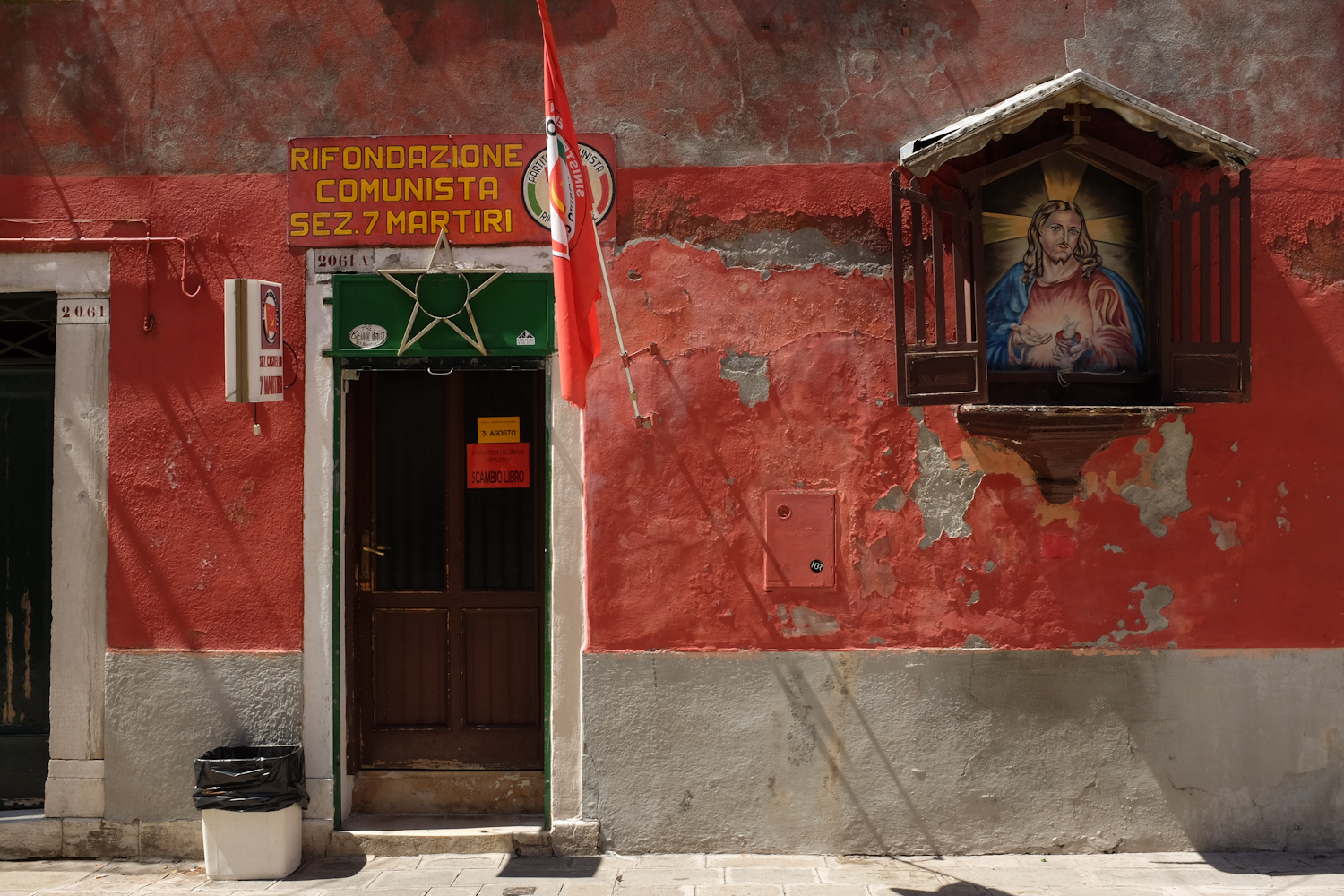 Though opening a mosque in Venice may be out of the question, Catholicism and Communism seem to coexist peacefully. 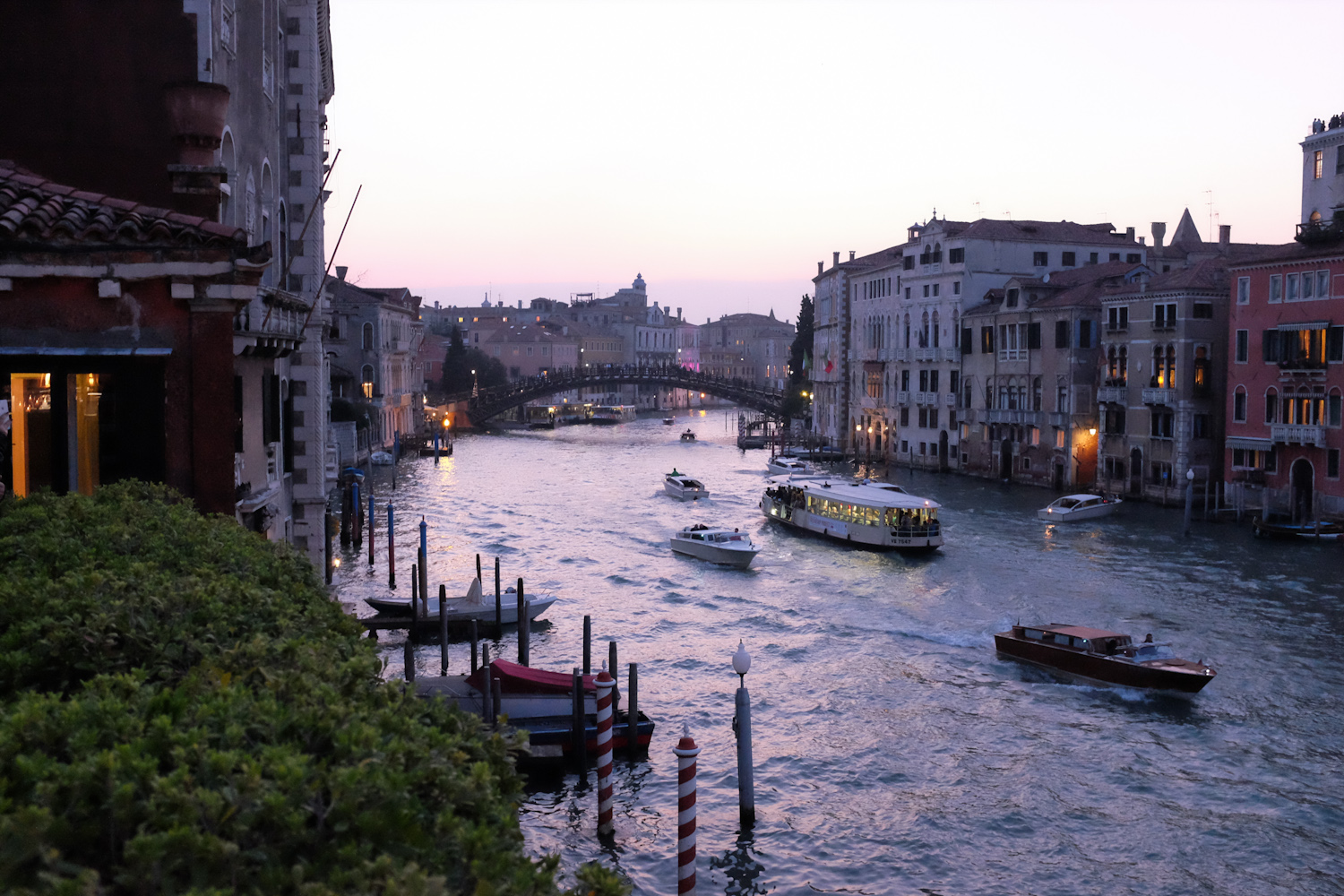 After a full day of art-appreciation, I fell naturally in step with the Italian tradition of an early evening aperitivo. 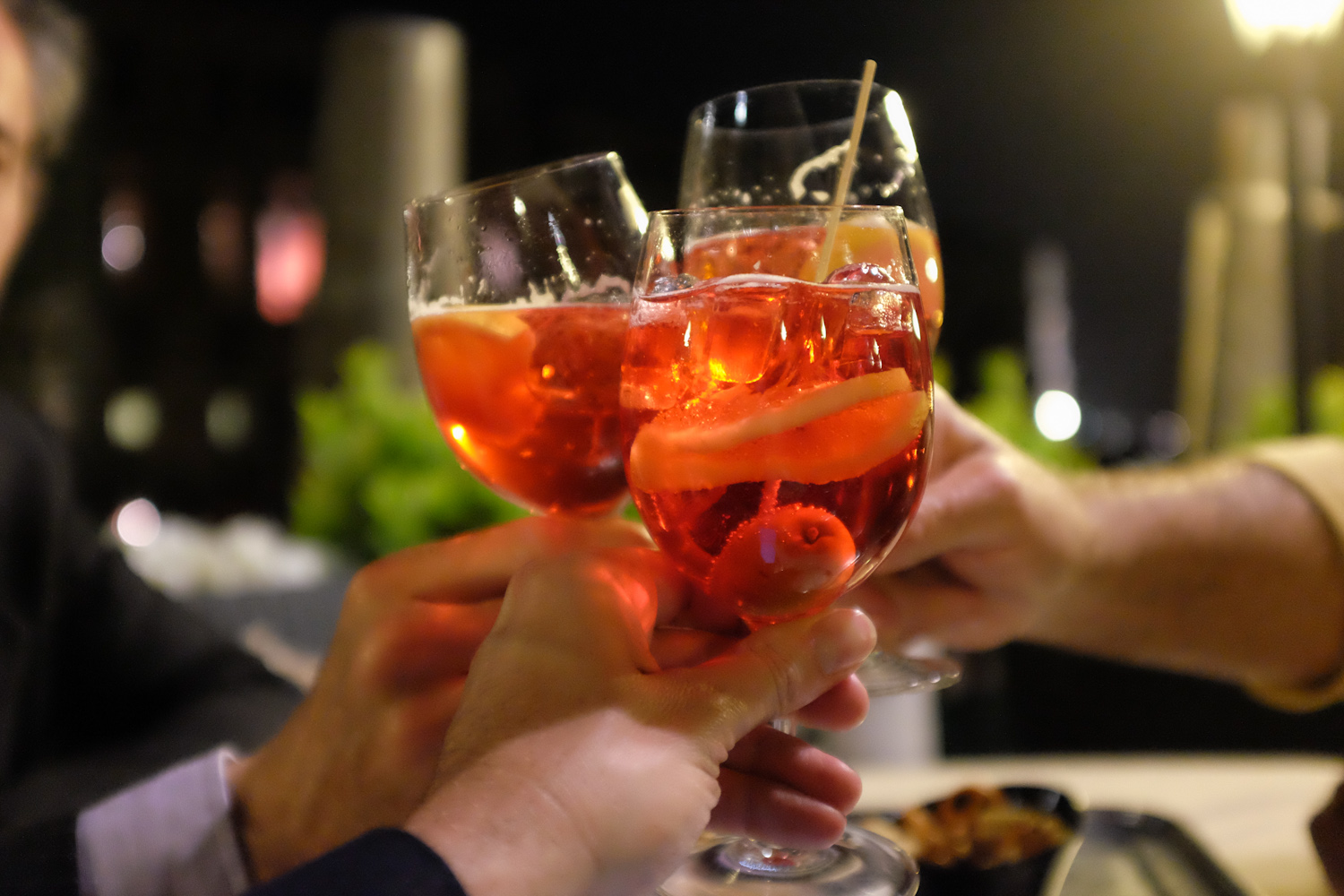 The official drink of Venice is the Aperol Spritz: Aperol, Prosecco and soda garnished with a wedge of orange, and a green olive if your lucky. 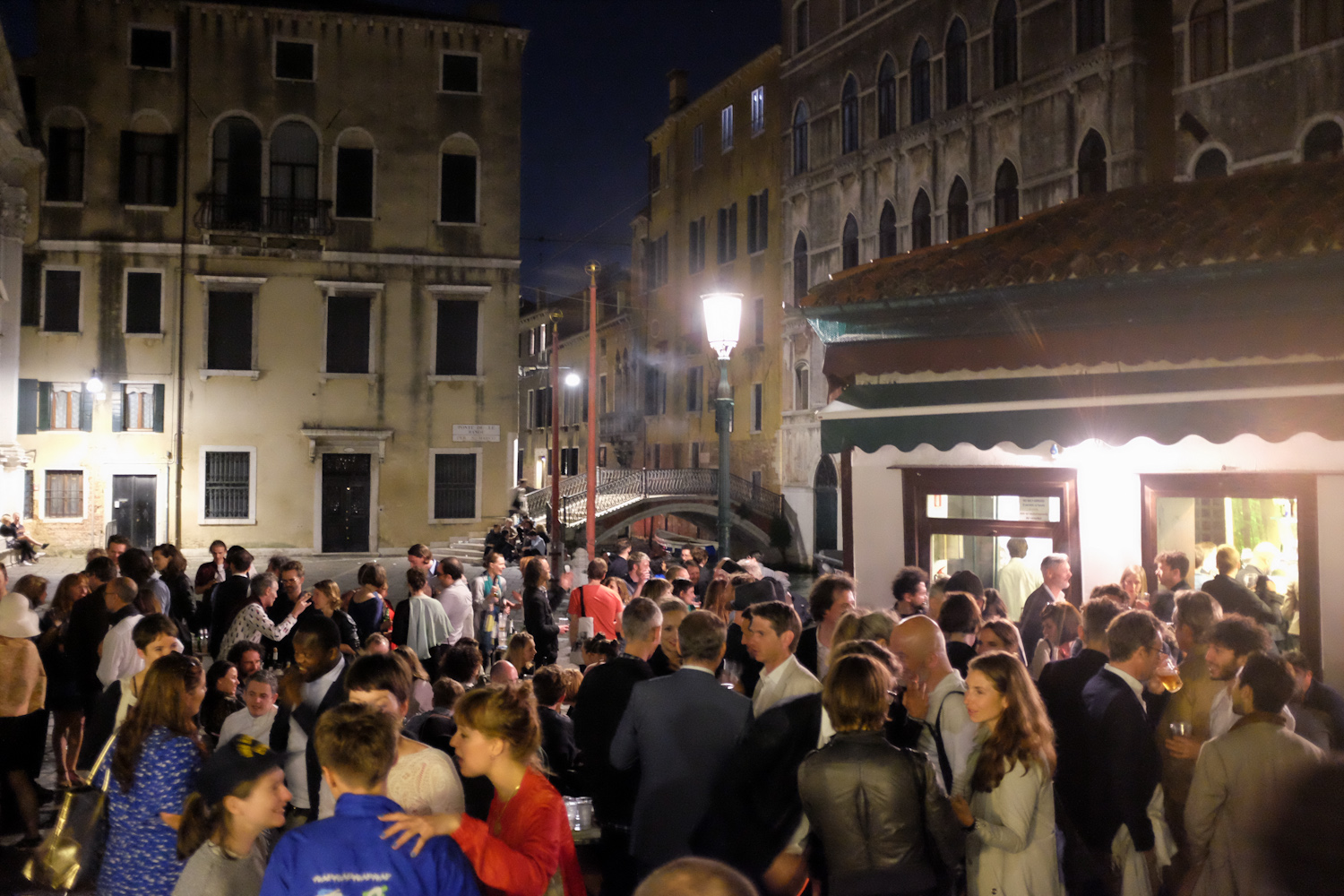 Every participating nation hosts a party, dinner, reception or all of the above during Preview Week. While most are lavish, I have always appreciated the Irish party. It takes place in an open piazza where guests purchase drinks from nearby locales.

This is what I most appreciate about Europe, the presence of incredible public spaces. They are designed and scaled for human interaction, rather than automobiles. Which makes them perfect for drinking.

I was fortunate enough to start a few evenings at the Peggy Guggenheim Collection—a world class modern art museum situated in Dorsoduro on the Grand Canal. The Artsy event even boasted smoking Spritzes. 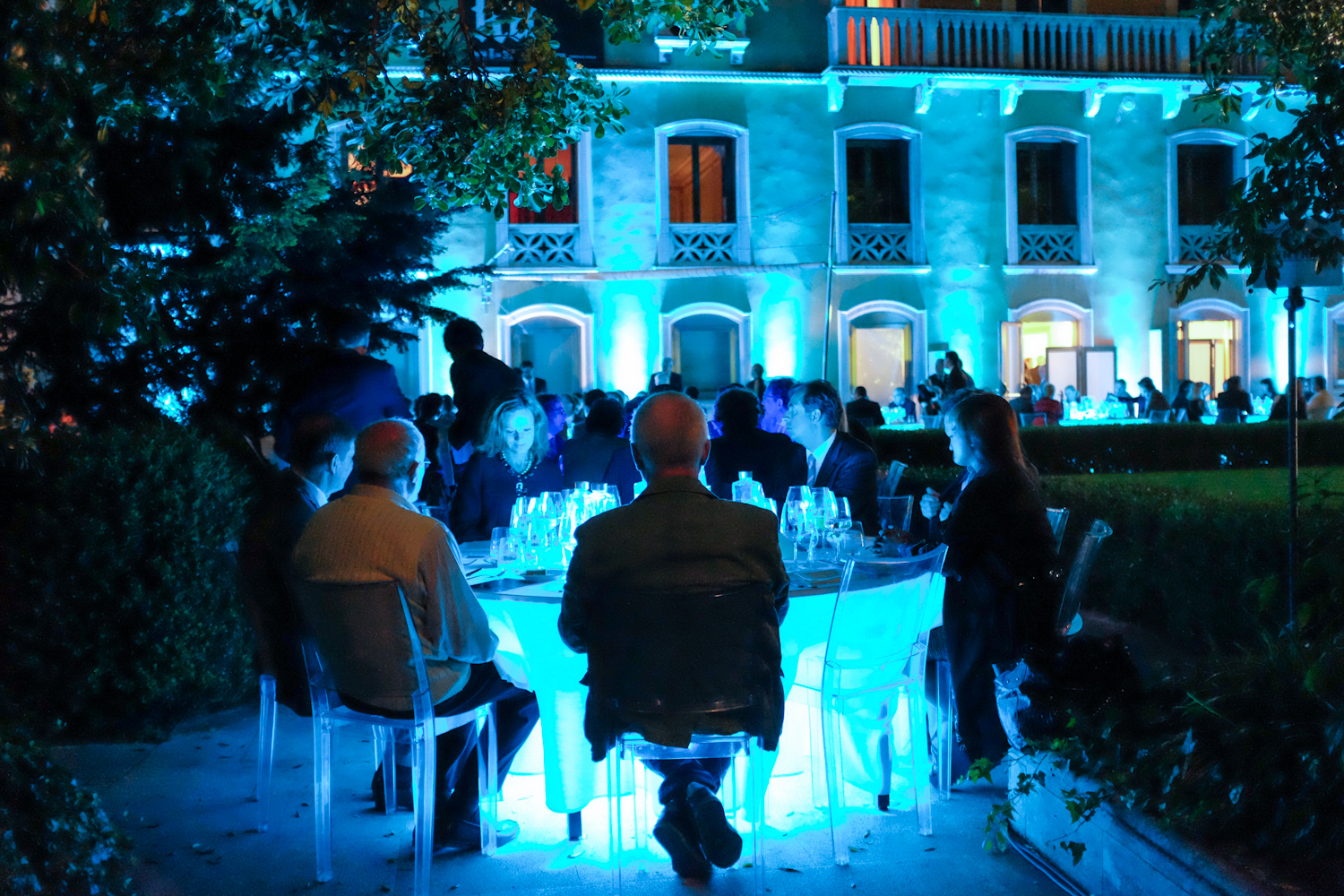 This is a really good example of a dinner I wasn’t invited to (there were many). I’m not sure the people at this table were either. 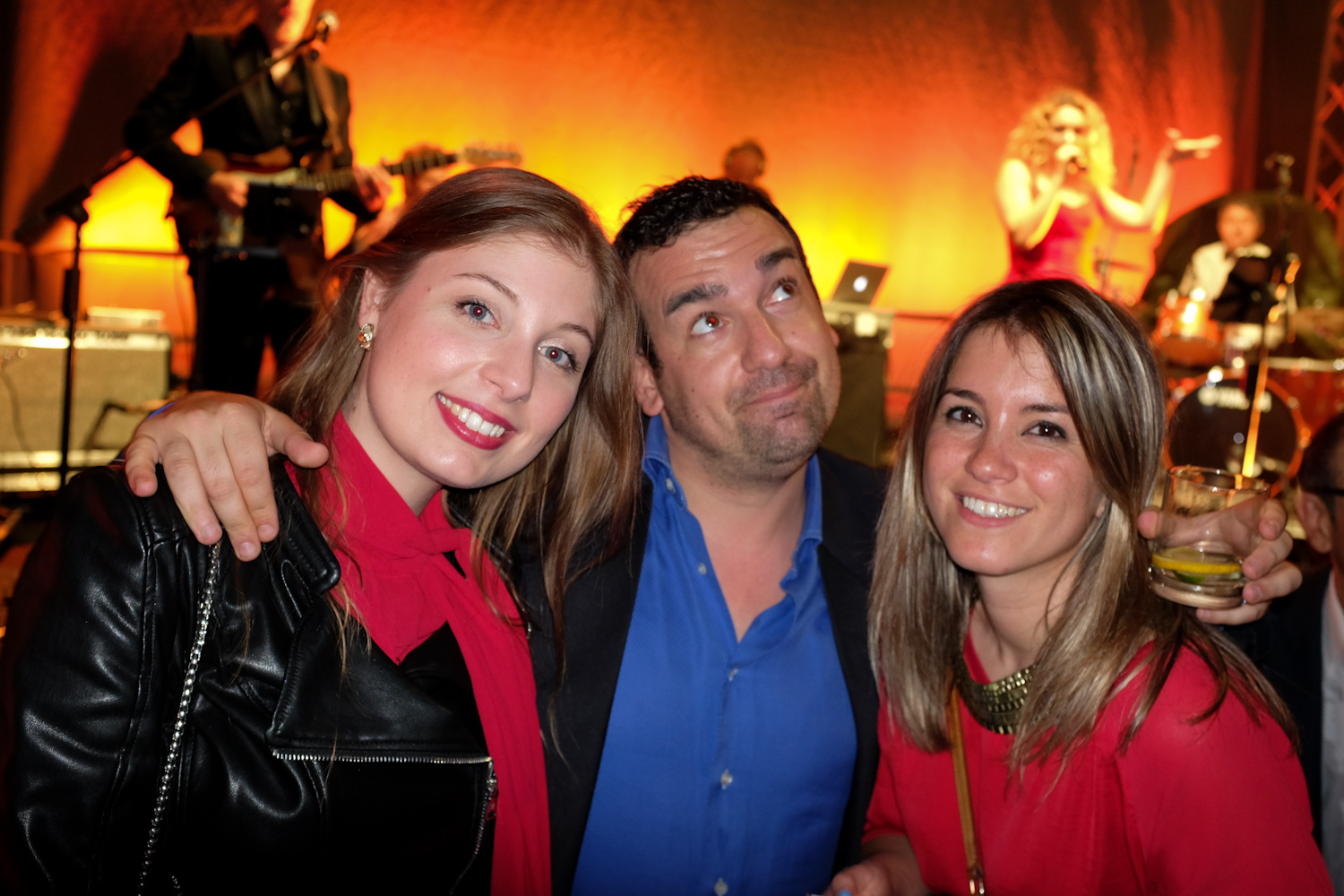 I met some affable young Venetians at the Israeli party. They hailed from old families, one dating back to 1043, and had a great deal of pride in their city. My rusty Italian was good enough to get an invitation to the Turkish party at the St. Regis Hotel.

There were at least twelve hundred others there in search of the Ibiza of the Venetian Lagoon. It was like a carnival until a three a.m. monsoon descended on the island—and there was only one way out. 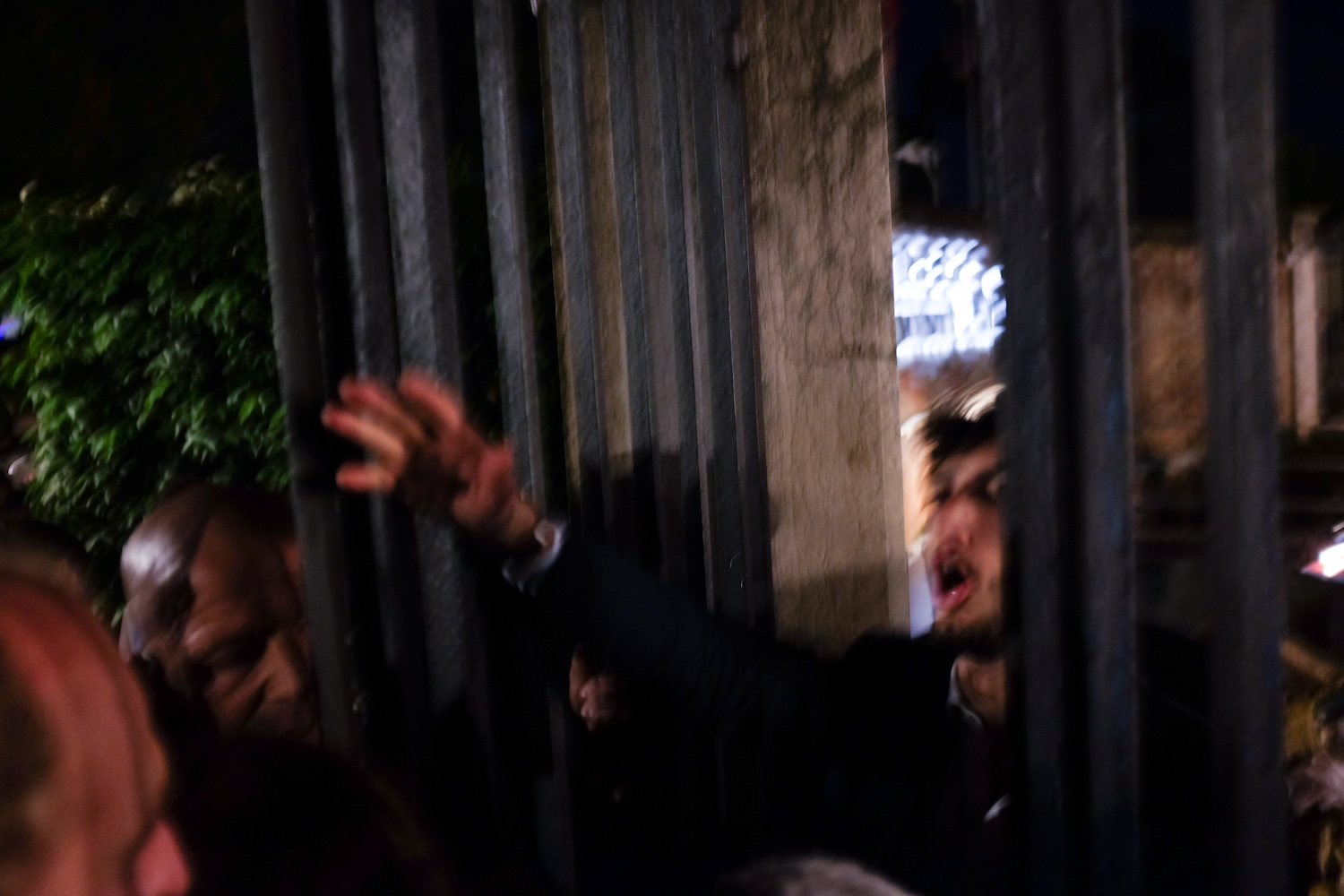 The limited number of Vaporettos and water taxis were inundated with desperate guests in waterlogged evening clothes. Guards had to force everyone to stay within the iron gates.

We ended up at the Bauer Hotel, the perennial go-to. Who can keep away when a whiskey on the rocks is only 26 Euros?

It’s probably worth mentioning that the city of Venice fills up with sophisticated, beautiful women from around the globe during the Biennale.

What I really love are Italian men and their double-breasted suits, pocket squares and crisp white collars. They have a part to play, and they’re more than happy to do so.

The majority of people you will likely rub shoulders with in Venice look more like this. 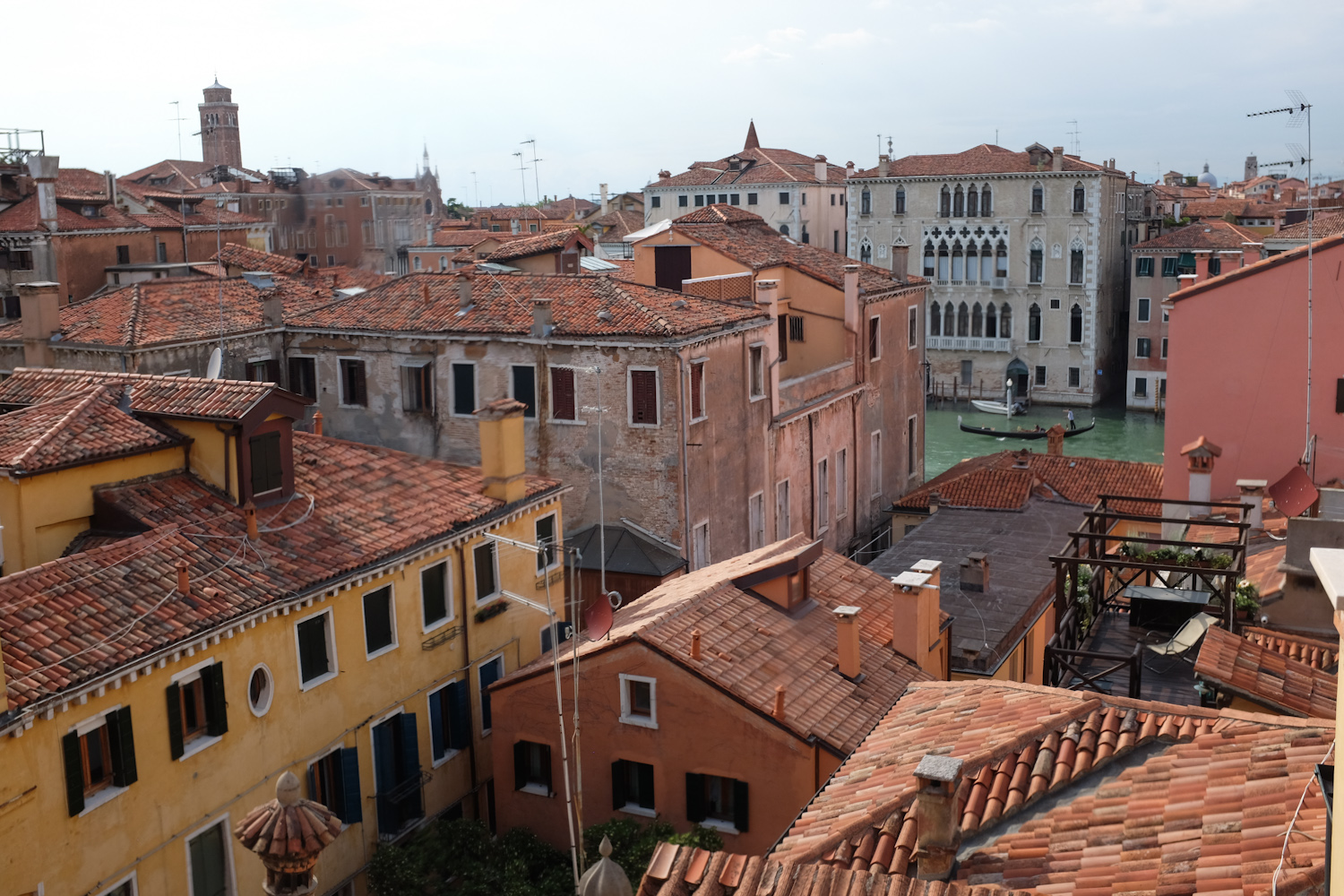 My last and perhaps best experience at the Biennale came at a privately curated and funded exhibition in Palazzo Fortuny. 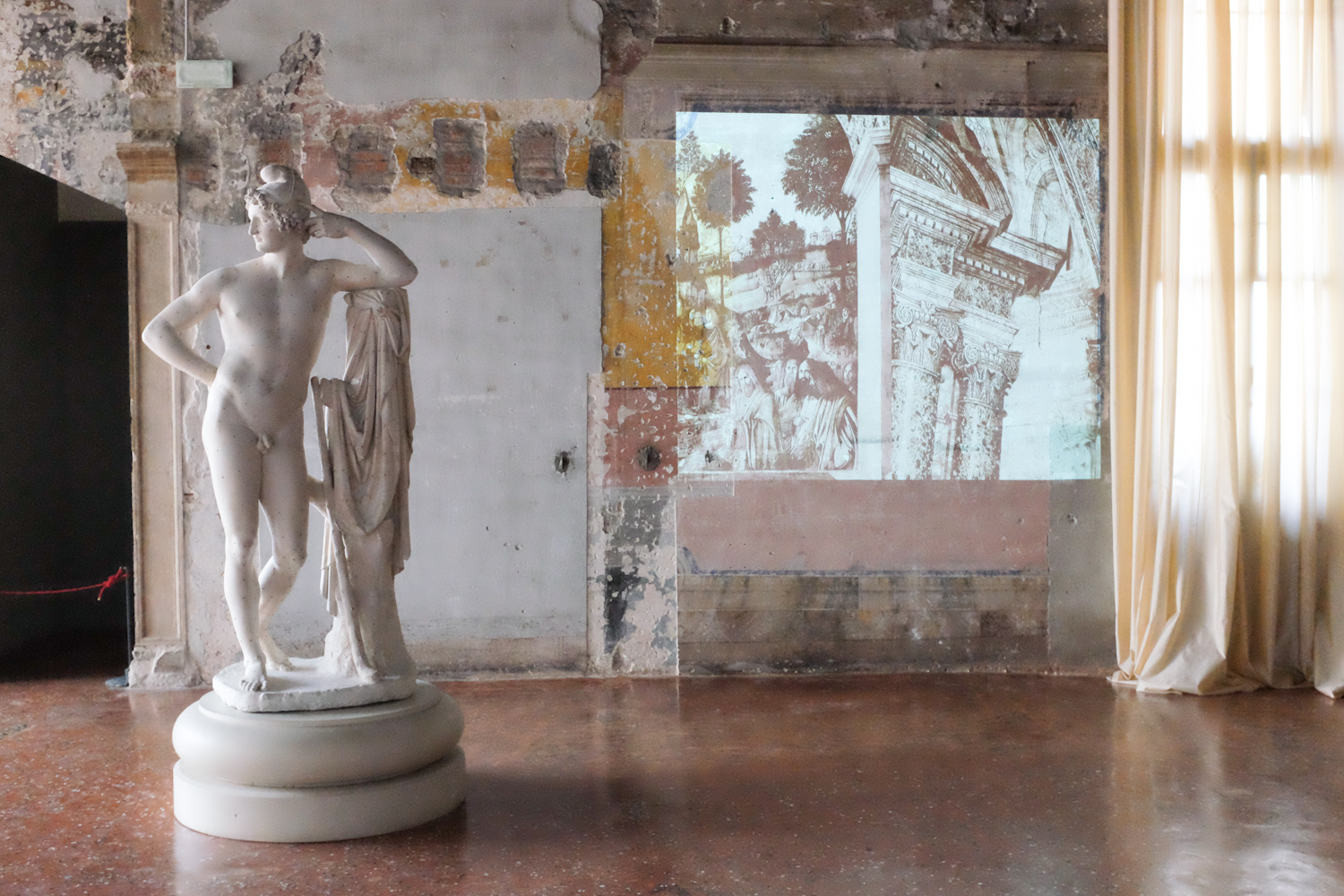 The current exhibit, “Proportio,” is meant to initiate a contemporary dialogue surrounding the lost knowledge of proportions and sacred geometry. In the West, the knowledge of both was intentionally guarded for hundreds of years and may have been purposefully forgotten or discarded. Curated by Axel Vervoordt and Daniela Ferretti, it’s extremely wide ranging, pulling from the work of architects, artists, scientists and philosophers throughout the ages.

The most memorable event for me this year was The Venetian Blinds, a three-day music festival at the Palazzo Grassi of rock bands comprised of visual artists.

The headliner was the renowned British artist Martin Creed and his band. They kicked out a high-energy set of ridiculous conceptual songs often with the backdrop of his video art projections. Some favorites were an entire song comprised of the letter A, a participatory countdown from one to one hundred, and a series of guitar notes that followed a flaccid penis to erection and then sadly back to flaccidity. 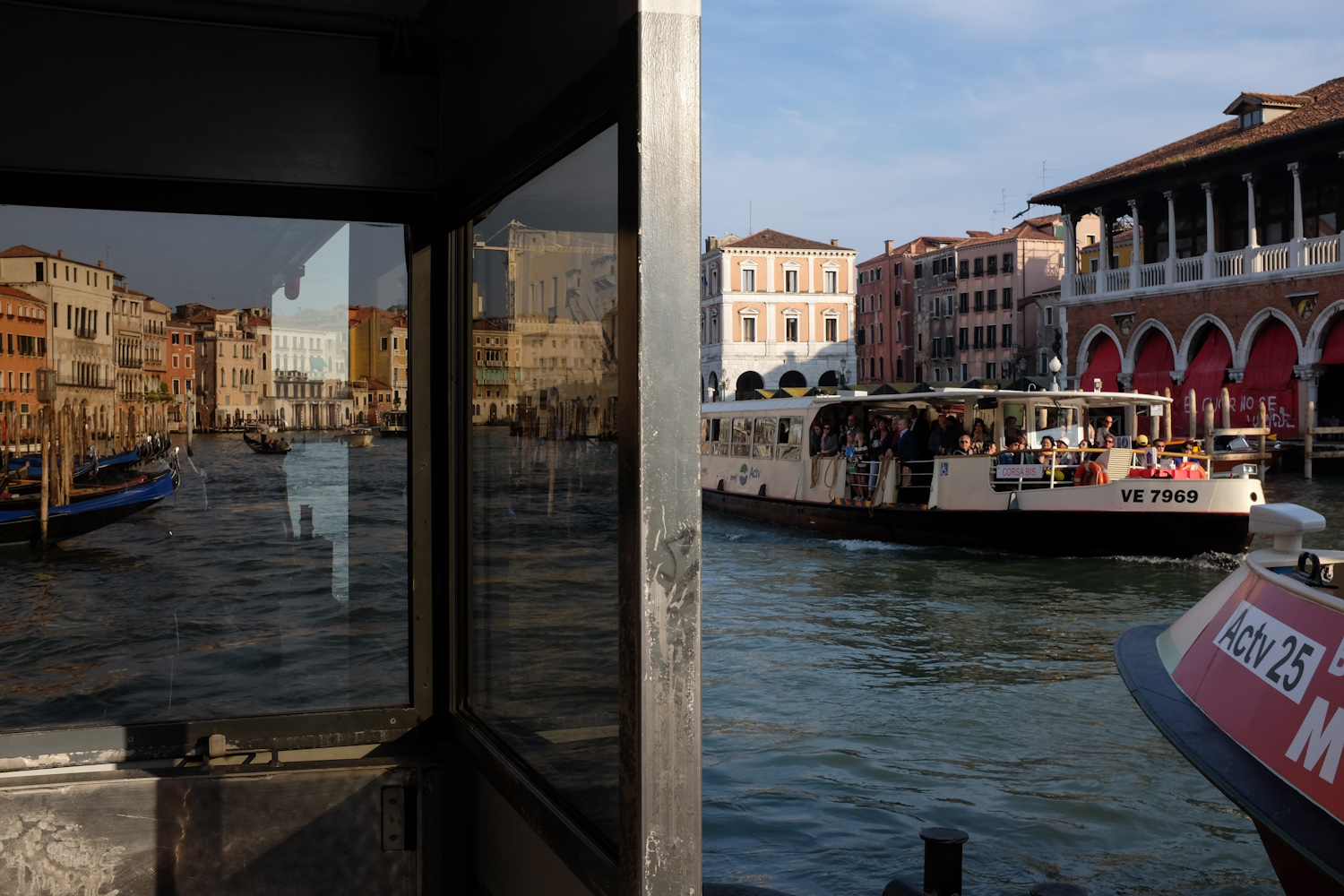 Speaking of things returning to normal, my week came to an end far too quickly. But as long as there is a Venice, there will be a Biennale. See you in two years.