In Virginia, with a Cold

I had to get up at four in the morning on Friday to catch the first plane out here. When I made it to Charlotte, the second plane was delayed, delayed indefinitely—uniformed men scurried around with supermarket garbage bags, stringing yellow police tape from one of the plane’s wings to the stair ramp. I don’t know why they were doing this. It was disconcerting. Apropos of nothing, last night I found out a friend of mine missed the “catch” part while she was playing catch with her new husband and a baseball broke her face.

I’m sick. Chartreuse phlegm is lodged inside my lungs, so thick it doesn’t go down the drain when I try to spit it out. Tissues spotted with mustard mucus stains. I hear the dull thrum of my voice inside my head when I talk. But you say yes to things. You show up. I am a power-through-er. I’ve always been proud of that. I don’t like to cancel.

An acquaintance and fellow writer, Matthew Vollmer, picked me up in the airport in a white Volvo with a cassette tape player that doesn’t work. He drove me to a vegetarian restaurant to eat with some grad students. I didn’t know we were going out to lunch with anyone, I had to ask. Most of the people I’ve met here function as if they are underwater.

He showed me the building where the shootings took place. He showed me where kids tried to jump out of windows.

The lunch was nice, actually. The kids—there were both graduate students and undergrads—seemed smart and were polite. I had a glass of white wine to mark the occasion. Afterwards, Matthew took me for a tour of the campus. I told him to pretend that I was his niece, a high school senior, and that he was a college junior and our parents had insisted I stay the weekend and he show me around. What I meant was that I wanted an insider-y tour, but he remained kind of quiet so I don’t know if he was processing my request or just thought it was too much.

I waited a while to ask about the shootings. But after yet another limestone building, grey-skied, slightly brutalist, perennially drab, I kept looking for a memorial of some kind and was afraid I missed it, so I asked. 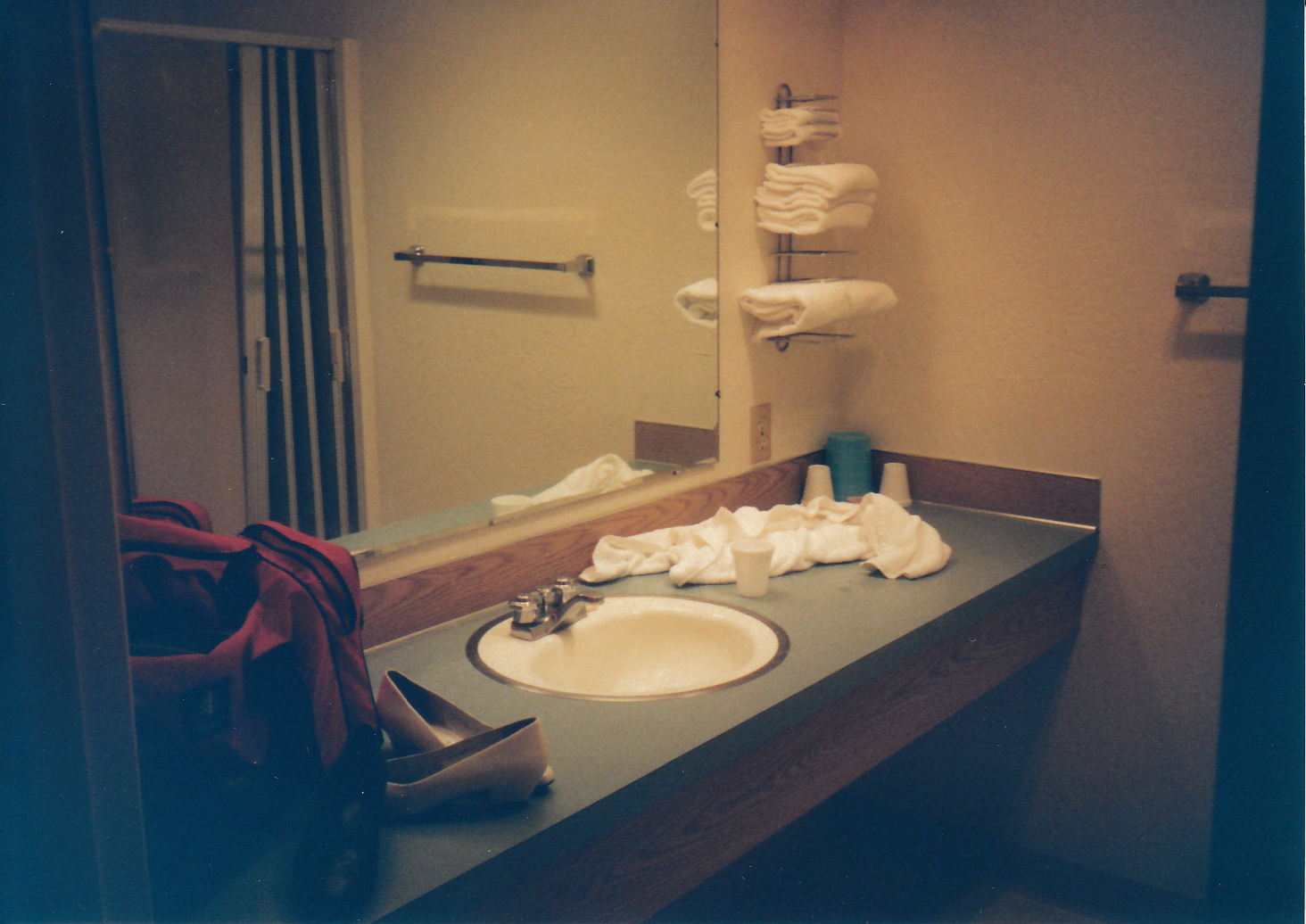 He showed me the building where the shootings took place. He showed me where kids tried to jump out of windows. And then he showed me the twenty million dollar renovated dining hall where franchises like Panera Bread are housed in sleek, track-lit stalls next to Jamba Juice and Chipotle. He took me by the memorial, which faces the college green. Thirty-two marble stones with names on them, placed in front of thirty-two shrubs. He showed me the name of a teacher, Liviu Lebrescu, who had survived the holocaust and who used his body as a shield to protect the children when the shooter burst in. The irony of a Jewish man who survives the holocaust only to die by gunfire on an American college campus was not lost on me.

There were a lot of cadets walking around. They walk very formally with perfect posture and Matthew told me that the freshman have to walk in a very specific way—they literally can’t cut corners, they have to walk the entire length of all sidewalks and can never jaywalk, and they have to do a fancy ankle snap thing when they turn.

They all have to live together in the same dorm room for all four years of college. They have to wake up at five in the morning to do exercises, they have to shave each day and groom. There was a lot of physicality on the Virginia Tech campus. Most of the boys and men were in the kind of shape that is almost chilling in its lack of softness. Flat stomachs, wide shoulders. I hope these boys aren’t doomed.

I was given a large suite in the Holiday Inn, and realized for the first time that “Holiday Inn” is the precursor of the expression, “staycation.” There is a kitchen, a living room, a massive bathroom, office, bed. I wish I had the whole weekend to stay here and be weird and feral. To write on this mass-produced office furniture and to walk across the parking lot to eat the calorific, cotton-tasting dough balls at Panera that they market as bread.

I was picked up by two students before the evening’s reading, neither of whom seemed to know where they were going. Also, they didn’t know the girl who had organized the festival which was strange because they were involved in it, their names were on the schedule that had been given to me by the organizer, whose name is Chelsea.

There were two undergraduate readers and two graduate readers and then there was an intermission at which they served lemonade, fruit salad, and Chick-Fil-A. When the MC, an off-key, impish nerd named Devon introduced me, he said, “Here is the lovely and beautiful Courtney Maum,” and then walked me down the stairs, which took an awkward amount of time to do because it was an amphitheater. That was it. That was the only introduction I got. But I went through with my presentation and my reading because you have to power through.

The readers after the intermission were pretty good. There were quite a few lesbians, and they delivered their poetry readings in the nonchalant and casually hysterical way that famous New York lesbian poets, like Eileen Myles, do. There was a lot of poetry about vaginas, read by straight girls. I don’t know. They’re young.

THERE WERE QUITE A FEW LESBIANS, AND THEY DELIVERED THEIR POETRY READINGS IN THE NONCHALANT AND CASUALLY HYSTERICAL WAY THAT FAMOUS NEW YORK LESBIAN POETS, LIKE EILEEN MYLES, DO.

Afterward, I’d hoped to go to one of the pubs in town to get an idea of what the social scene is like here and also to have a good, local beer. I also needed food. Matthew and the other students who wanted to come out agreed that we should go to a dive bar. Then Matthew looped around a couple minutes later and said we were instead going to my hotel bar, which was a terrible idea. 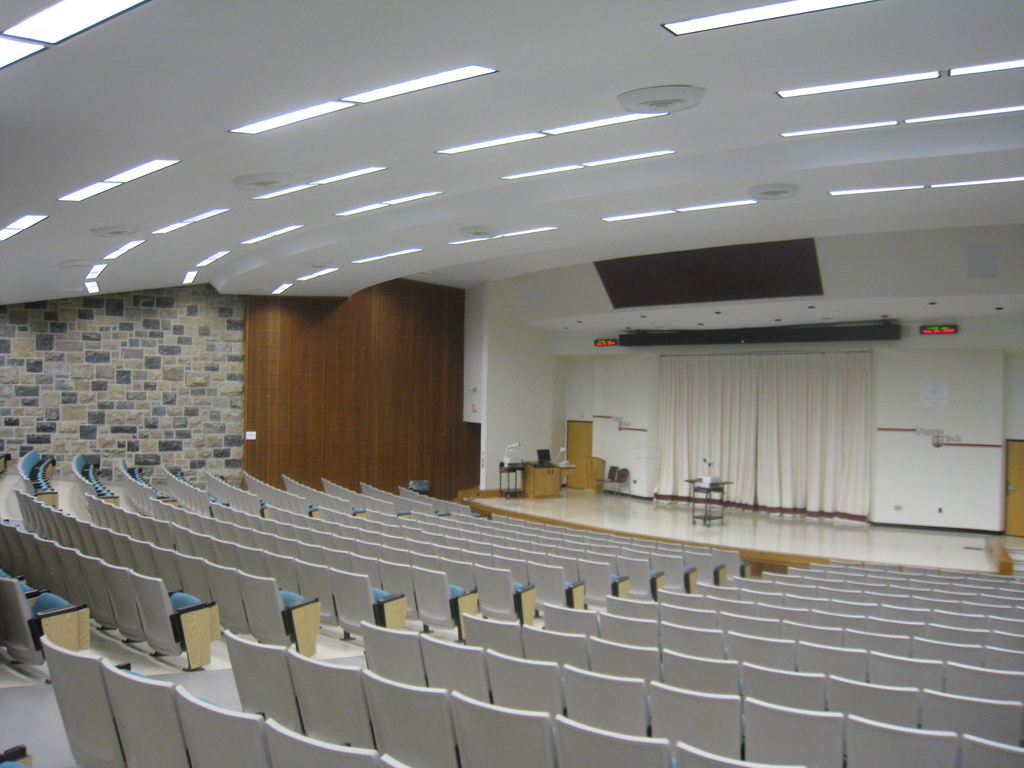 The hotel bar was awful. But in a perfect way. There was a tall man in the atrium standing, for no apparent reason, in front of a table of wrapped silverware, across from a faux copper vat of open, but corked wine that no one was serving. The barmaids were intensely disinterested in barkeeping, and the place was nearly empty except for the silverware guy, one quiet couple and the people in our group. When I got there, Matthew and another writer, a funny guy named Robert, were eating hot dogs, and I thought, why don’t we all do something together if they also wanted food? And then I looked at what they were eating and it wasn’t food so much as an assemblage of microwaved things.

We all sat at the counter and drank tepid beers and Matthew and the funny writer, Robert, had whiskeys. By that time, my cold had crept up into my face and was holding my intellectual capacities hostage. I could barely breathe, and I couldn’t hear very well. Someone said there was going to be a banjo show in the back of the hotel bar. It felt like it was four in the morning, but it was actually closer to ten. The walls of the bar were painted black and the counter was greasy. There were cheddar goldfish in martini cups for people to eat, with a little serving spoon.

Sometime after ten, two men with banjos actually did show up, and went into the back part of the bar and started playing for one another. There wasn’t any rhyme or reason to it and it wasn’t clear if it was a show. The tall man remained in the front entrance manning the wrapped silverware. The men playing the banjos were old, probably in their seventies. Around ten thirty, more old people showed up. They got wine from somewhere, probably from that faux copper bin out front. Maybe it was a group of men playing for each other, I have no idea. By that time, my cold had crept into the lagoons above my cheekbones and underneath my eyes and my head was experiencing severe cabin pressure.

Not too much was said about my reading. Matthew asked me if I did “a lot of readings.” It was the third time I’d been asked that that night. Robert said that he felt envious, but he said nothing more. I wasn’t sure what to do with either of these comments so I let them go and tried to break through my cold fog to decide if I should go back to my overly air conditioned hotel room or stay and have another beer, both of which seemed bad options.

Finally, I left. I walked back to the hotel entrance, adjacent to the bar, with grand plans to ask the night attendant for an extra comforter, but he was busy checking in an attractive young black man in track pants. The check-in process went on a lot longer than it needed to, especially because by that time it was eleven o’clock at night. Once the young man had signed the waiver for incidentals, the night attendant reached down under a counter and loudly announced that he was the “Guest of the Day!” and was getting a free breakfast. The young man took the breakfast pass and sleepily repeated, “Guest of the Day?” The night attendant seemed really happy about this last minute decision, and I felt jealous and annoyed because I wanted a blanket, and also, intrigued.

When the young man finally went off with his free breakfast pass and his hotel key, I asked the man about a blanket and he launched into this hallucinatory rhetoric about how he could either bring a blanket to my room or I could come back and pick one up later, but maybe I had somewhere to go? I said, yes, I had somewhere to go, I wanted to go to sleep in my room, but with an extra blanket. He said, “In that case, I won’t bother you.” By that time, my cold had taken over all of the available space beneath my forehead so I gave up the blanket and instead asked about the breakfast buffet in the morning and he said that it was “The best breakfast in the known world” and that it was from seven to eleven and that it was ten dollars and fifty cents.

This morning, even though I wanted something heartier like the hotel’s breakfast buffet, I walked across the parking lot for breakfast at Panera Bread because I felt slighted that I didn’t get a breakfast pass.

Courtney Maum is the author of the novel I Am Having So Much Fun Here Without You, (now out in paperback from Touchstone/Simon&Schuster) a contributor to the New York Times bestselling essay collection, “Worn Stories,” the book reviewer for Electric Literature’s satirical “Celebrity Book Review”, and the book reviewer for the 2022-based news outlet, Sirens. Follow her on Twitter @cmaum