In the spring of 1955, the United States Government dropped a nuclear bomb on a town in the Nevada desert. Survival Town, as it was later dubbed, was populated by sharp-featured mannequin families, a whole tribe of department store-clad Mr. and Mrs. Americas. In houses with fully-stocked pantries and decorated living rooms, the model families were set around dinner tables, beneath windows hung with flowered curtains.

The Federal Civil Defense Administration wanted to know what would happen to a typical American home during a nuclear attack: whether a brick house reinforced by cinder blocks would fare better than a wooden house; whether a bathroom shelter would stand when the outside walls crumbled around it; what kinds of clothing would provide protection against radiation; whether the beer would be drinkable; what would happen to a hot dog blasted by the bomb. 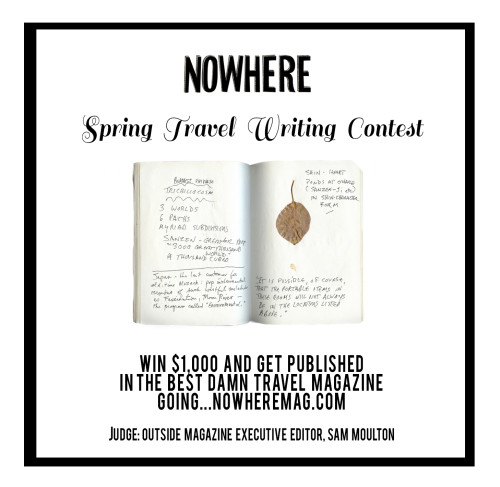 In the early hours of a pre-dawn May morning, civil defense workers, scientists, media observers, and military troops watched as the darkness was lifted, in eerie silence, by the blooming fireball, bright white cooling to orange. It would take half a minute for the low rumblings of the explosion to reach the observers. The houses rocked back on their foundations and the windows billowed with smoke and dust for a few moments; some of them crumpled inwards, splintering as if made of sticks but some stood squat and strong against the blast.

The mannequin families toppled forward out of their chairs, still in angled sitting positions, butts in the air. A leggy, blond mannequin pitched backwards on the couch with her male companion, as if thrown into passionate lovemaking in the face of the apocalypse. The beer was okay to drink, but didn’t taste very good. The hotdog bulged, rancid. The irradiated clothes, all donated by J.C. Penney’s, were taken to Las Vegas and displayed in shop windows downtown. 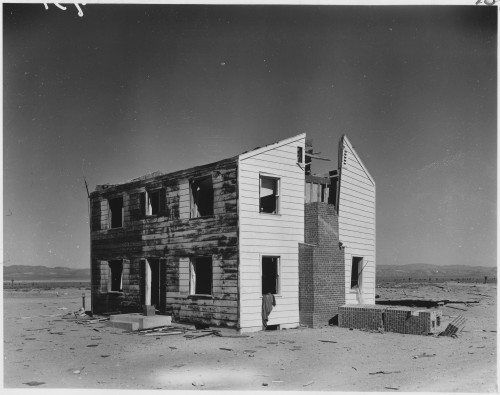 This was not the first time the government had bombed a model American town, nor would it be the last. Between 1951 and 1992, the Nevada test felt the reverberations of more than a hundred open-air detonations and another 900 below ground. The desert is pocked with craters.

Some of the Survival Town houses still stand amidst pale gold grasses, low desert shrubs hiding bright flowers, and gnarled Joshua trees. The mannequins are long gone, and these shells are given over to the sand that blows through their glassless windows, the scorpions that scuttle in the corners, the bats and mice. A jackrabbit pauses in the shade cast by the two-story frame, quivering to go unseen by a coyote or a mountain lion.