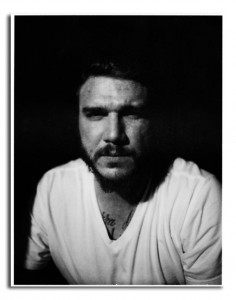 Jared Moossy is an American photographer who filmed all four episodes of the documentary series Witness, which recently aired on HBO. He specializes in conflict photography and is a founding member of the photo-collective Razon. For the series, he travelled to Juarez, Libya, Sudan, and Brazil. Witness shows what life is like for photojournalists working in conflict zones; how they utilize fixers and contacts, search out a story, and make their photographs. The series also touches on the dangers that the photographers, their colleagues, and subjects face, while pursing this work.

How long were you working on the Witness series and how did you get involved with the project?

I was working on it for two and-a-half years, from start to air date. The director, David Frankham, approached myself and Eros Hoagland, who was the featured photographer of both Rio and Juarez. David said he was getting fed up with the way news was getting told. You know, someone on a rooftop somewhere talking about how bad it was somewhere else…and then seeing pictures from photojournalists from the front line. He thought, “Why aren’t we talking to them? Why aren’t we getting news directly from them? Why are they only supplying photographs?”

So he literally just Googled war photographer and went through a list of people that came up. He called Eros and I, told us his ideas, and flew us out to LA. We talked about it for a couple of days and decided we’d go shoot something in Juarez and see what we could come up with. After that, he edited it and gave it to Michael Mann, he liked it, took it to HBO, they liked it, and it grew legs.

The series does a good job of covering both what it’s like to be a photographer working in these countries and what’s happening there, informing the viewer of the wider story. Was that something you set out to do from the start?

That was our initial idea but that’s not to say the first time we did it, it really came through. It took doing over and over again. Being on the ground every day, looking at the footage, just being open to what was going on around us, and having the camera rolling. I’m trying to shoot, trying to turn the camera back around, get the photographer and his reaction to what’s happening. A lot of that was just keeping the camera going, the idea was to push everything, just shoot, shoot, shoot.

What was it like to work in different countries with a new photographer for each episode?

There was a formula of things I needed to get everyday, a shot list, but working with photographers within each country was totally different. It was all off the cuff, so each situation we got in we had to figure out how we were going to work in the environment, wherever we were. We had general ideas of what we thought was going on in the countries. Obviously the photographers had clear ideas because they’ve worked in those regions. The whole thing was about the experience, not the answers. We’re not giving answers; we’re raising questions, thinking in that way allowed us to be a lot freer in the way that we filmed.

What was your experience visiting all the countries and conflict situations working on Witness? Was the pace of this project something that was normal for you?

I’ve been travelling quite a bit in conflict areas, but Witness pushed it to the next level; it was more pressure, more days on he ground. It became a whirlwind of working, but it’s something I’ve gotten semi-used to.

Which location that you worked in for Witness seemed to be the most unstable?

I’ve been getting that question a lot, “Which place was the scariest? Which place was most dangerous or whatever?” It would be between Rio and Libya. Libya was just unstable because everywhere you went people were heavily armed, you’re around all these destroyed buildings, and no one knew what was going on. It was a place where people weren’t allowed to have any kind of weaponry or alcohol and the next thing you know, it’s getting liberated, and a large majority of people have an AK and a bottle of Jack, and that is just a recipe for disaster. These people were all of a sudden allowed rights they’ve never had before and were taking advantage of that.

Rio was different; we were trying to get into rough areas where in the past a lot of drug organizations or gangs were open to journalists being around, because they were in control of the territory. We went at a time where they didn’t want to be seen. They would be pissed off if we were around. We spent time around big drug dealers trying to get permission to shoot, and people were getting high, they’d be pushing us around, kind of testing us to see how we were going to react. There were people telling us, “Smoke weed!,” and we’d say “No, no we don’t want to,” and they would be pointing guns and yelling at us.

In Sudan I didn’t ever really feel scared, like it was that dangerous. But it was just physically really intense. We’d walk 18 kilometers a day in the jungle sometimes at night and we were just at the mercy of these 5 or 6 dudes in the middle of nowhere.

These are all places that are totally entangled in confusion and that’s one of the reasons that we picked these places for Witness, so that we can try to dig up more questions. Like who are we dealing with? What’s going on?

It seems like on top of all the pressure of producing the show you’re putting yourself through a lot of psychic and physical stress going to these conflict zones. Is that something you deal with while you’re there or does it take some time to process afterwards?

Both. You’re definitely dealing with it on the ground. Talking about in Rio, that was an exercise of mental strength to not freak out at the time and just to be like “I can do this. I’ve been in scary situations, I can keep pushing through”. You’re definitely processing it on the ground everyday because everyday is totally different and changing. Some days are totally fine and you feel like you’re on vacation and just shooting pretty video and the next day you’re riding around with big burly dudes with guns trying to go get into fight.

Are there going to be more Witness episodes?

I don’t know, I hope so. I wrote Michael Mann an email yesterday asking about it. I think everyone on the production side of it want there to be more. I know people are asking me, I’m sure they’re asking them as well. Michael Mann mentioned wanting to do more, the director David Frankham wants to do more. I haven’t heard anything more about it, I’m just the cameraman.

What are your plans now, going anywhere soon?

I might be going to Beirut pretty soon but that would just be for personal stuff. I’ve been working on a long-term project on America, travelling around by motorcycle and spending time with people and photographing the shifting or not shifting landscape of the country.

Is there a place you haven’t been to yet that you really want to go to?

Right now it would be the Congo, I’ve been on the border. I don’t know, it’s a good question, I want to go everywhere. I might start going to beautiful places that aren’t always in conflict, like Mongolia, or just go back to Afghanistan…